The crowd met at noon outside Premier Marois’ office on McGill College Ave. and for about an hour sang, chanted and listened to speeches by such prominent public figures as journalist Jim Duff and Beryl Wajsman of the Institute for Public Affairs of Montreal, all of whom urged popular resistance to the Parti Quebecois legislation.

The legislation, which will be subject to public consultation in March, was unveiled by PQ Language Minister Diane de Courcy and would change several provisions in the current language laws.

The law would make it more difficult for municipalities to maintain their bilingual status if their anglophone population drops below 50 percent. Those seeking to enter the nursing order would have to demonstrate advanced proficiency in French. Measures would be taken to discourage English CEGEPs from recruiting students from the French system.

Jim Duff told the crowd that the proposed new rules would hurt francophones by making it harder to participate in post-secondary education in English.

He told of a francophone woman who complained that her unemployed son was living in her basement because he was unable to find work because he had not been adequately taught to speak English in school.

Wajsman urged those in attendance to withhold taxes as part of a monetary revolution against the legislation.

One solitary counter-demonstrator stood across the street with a megaphone, but police kept him at a distance.

The rally started at noon and ended about one hour later with the crowd singing O Canada in both French and English. 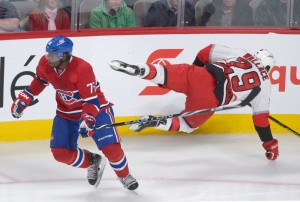 With a 3-0 win over Carolina, the Montreal Canadiens are on a winning streak.