Pospisil, Auger-Aliassime join Shapovalov in round of 16 at US Open 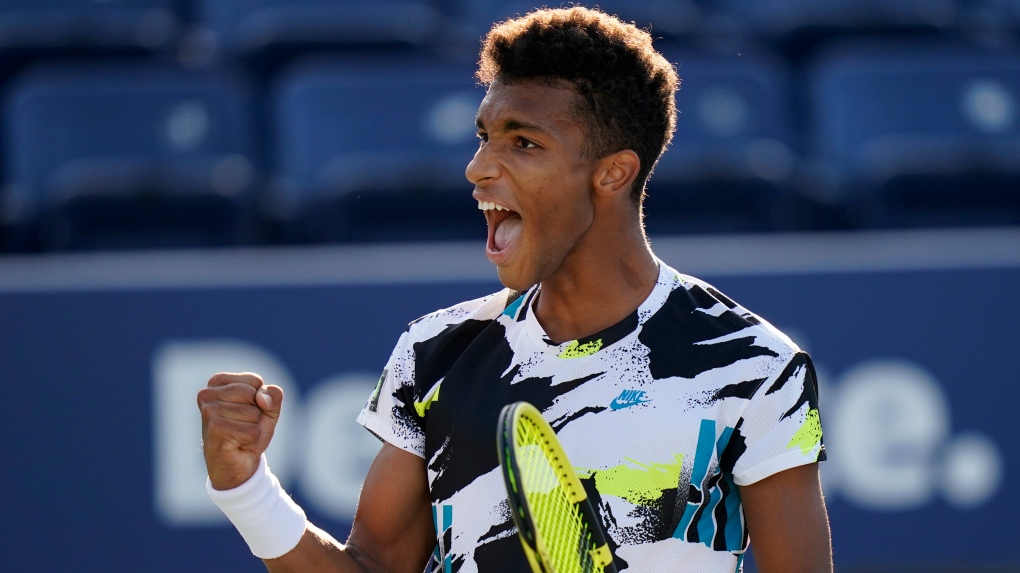 Felix Auger-Aliassime, of Canada, celebrates after winning a match against Corentin Moutet, of France, during the third round of the US Open tennis championships, Saturday, Sept. 5, 2020, in New York. (AP Photo/Frank Franklin II)

NEW YORK -- Vasek Pospisil was feeling run down after dropping back-to-back sets in the third round of the U.S. Open on Saturday.

But a timely visit by a physiotherapist early in the fourth set helped turned things around for the 30-year-old Canadian.

The Vancouver player, already dealing with an abdominal strain, added a right quadriceps strain to his ailments sometime during Saturday's match, and called for a medical timeout two games into the fourth set.

"At that point I knew there was no room for error so I just said: 'well, OK if I play a perfect match now, if I win two more sets I can win the match,' and yeah, it just happened that way," said Pospisil.

"I played aggressive, I executed extremely well. ... I played a pretty flawless two sets there in the fourth and fifth."

Pospisil said both injuries are manageable, but he'll monitor them before his next match Monday against No. 21 seed Alex de Minaur of Australia.

Later Saturday, No. 15 seed Felix Auger-Aliassime of Montreal crushed Corentin Moutet of France 6-1, 6-0, 6-4, making him the third Canadian man to advance to the fourth round of the Grand Slam tournament.

Aliassime cruised through the first two sets before Moutet battled in the third.

"It was interesting, because even though you win the first two sets easily, you got to forget about those," said Aliassime. "You're up two sets to love. That's mainly it. Obviously it's better than being down.

"I was looking at it like, OK, even if he's playing better, I knew his back is against the wall, he now has nothing to lose. He's going to try everything."

Auger-Aliassime and Pospisil joined Denis Shapovalov of Richmond Hill, Ont., in the round of 16. Shapovalov beat American Taylor Fritz in five sets on Friday.

Before this tournament, three Canadian men never had advanced to the third round of the event in the same year. Now, Shapovalov, Auger-Aliassime and Pospisil are four wins away from matching fellow Canadian Bianca Andreescu's feat from last year when she captured the women's title at the event.

No Canadian man has reached the quarterfinals at the U.S. Open, going 0-12 in the round of 16.

Pospisil, ranked No. 94, came into the match 0-3 in his career against Bautista Agut.

Saturday's win was Pospisil's second straight upset of the tournament. He beat fellow Canadian and No. 25 seed Milos Raonic in the second round.

Pospisil looked to be heading towards defeat after losing the second and third sets against Bautista Agut, but a late break put the Canadian ahead 5-3 in the fourth before he easily served out the set.

Pospisil earned an early break in the fifth set en route to a 3-1 lead, then broke Bautista Agut once more to go up 5-2.

"(The physiotherapist) really, really helped it big time when he came onto the court," Pospisil said. "He loosened up (the quad) and strapped it which really seemed to do wonders for it and I really didn't feel it on my serve after that."

Pospisil had 19 aces and 70 winners, including on the final point. He converted four of eight break points and saved 12 of 15.

Bautista Agut was part of the Spanish team that defeated Canada in the Davis Cup final last November. Pospisil had been on a tear throughout that tournament, but did not get a chance to play in the championship round. Bautista Agut beat Auger-Aliassime in the first rubber of the final round before Rafael Nadal topped Shapovalov to claim the championship.

Pospisil is 0-2 against de Minaur, with both losses coming in 2018. The Canadian has enjoyed a resurgence in his game, however, after returning from back surgery to repair a herniated disc in January 2019.

Auger-Aliassime, 20, dispatched his opponent in under two hours, including a quick 28-minute second set.

Moutet, ranked 77th in the world, was no match for Auger-Aliassime after upsetting No. 23 seed Dan Evans of Great Britain in a suspended match that didn't finish until Friday.

Auger-Aliassime will next face the winner of a match between No. 2 seed Dominic Thiem of Austria and No. 31 seed Marin Cilic of Croatia.

"I can obviously take a lot of positives from my win today," Aliassime said. "With the way I served, I was only broken once, which didn't really have a huge impact on the score at the end. I can be happy with that."

No. 12 seed Shapovalov plays No. 7 seed David Goffin of Belgium in the fourth round Sunday.

This report by The Canadian Press was first published Sept. 5, 2020.