Founded by survivors decades ago, the Montreal Holocaust Museum has outgrown its current site on Cote-Ste-Catherine Road and will move to a new home.

The museum's layout currently has 400 artifacts on display but another 13,000 in storage. The new site promises to be larger and more hi-tech.

"It's clear glass on the ground floor, so when people walk by, they can see right through the garden," said Eva Kuper, who was on the selection jury for the museum's new architectural design. "There's also a memorial wall which you can actually see from the street."

Kuper was one of 9,000 Holocaust survivors who settled in Montreal.

Many established themselves along St-Laurent Boulvevard, which is where the new museum will be built: 3535 St-Laurent, near Prince Arthur Street. The site is currently a parking lot.

Kuper says the new space will allow visitors to reflect on what they see. "Very often after having seen something disturbing, which is very easy to do in a Holocaust museum as you can imagine, there will be places for reflection and green spaces and gardens." 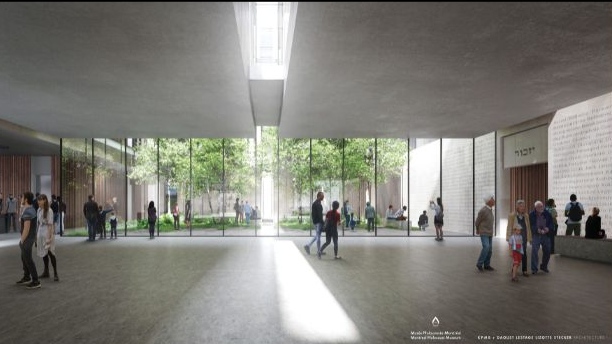 "To welcome so many more people but also to give them even more meaningful experiences, they'll be exhibits, they'll be classrooms and testimony spaces. It's going to be really an improved experience for visitors of all ages," she said.

The $90 million price tag is paid for with public and private money, including a $15 million dollar donation from the Azrieli foundation.

The current location will stay open until the inauguration of the much larger site.

Construction begins next year with plans to open in 2025.