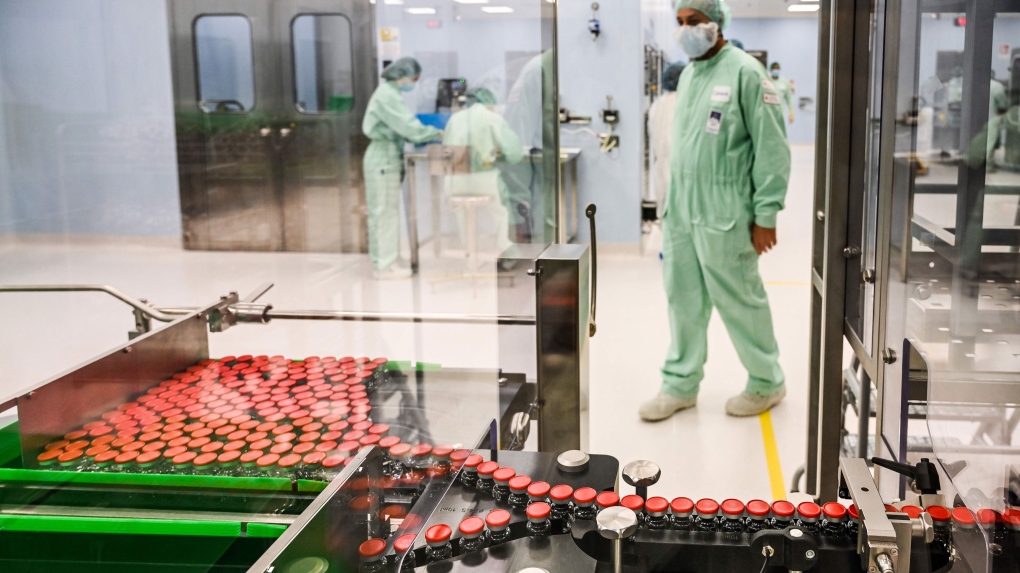 A laboratory technician supervises capped vials during filling and packaging tests for the large-scale production and supply of the University of Oxfords COVID-19 vaccine candidate, AZD1222, conducted on a high-performance aseptic vial filling line on September 11, 2020 at the Italian biologics manufacturing facility of multinational corporation Catalent in Anagni, southeast of Rome, during the COVID-19 infection, caused by the novel coronavirus. 9Vincenzo Pinto/AFP/Getty Images via CNN)

MONTREAL -- Over the past year, a number of countries have taken the initiative of encouraging their national pharmaceutical companies to develop vaccines against COVID- 19, in particular, through generous research grants and promises to purchase vaccines if the results are encouraging. These companies have designed, licensed and are currently distributing vaccines.

So far, the leaders in such initiatives have been Russia, China, the United Kingdom, India and the United States. They will benefit commercially, but there is another motivation.

They hope to use vaccines to influence other nations. Producing a vaccine may allow them to sway other countries politically and economically in their favour. As the saying goes, "I scratch your back, you scratch mine." This is vaccine diplomacy.

This is clearly the case with the Russian Sputnik V vaccine, and those produced in China -- and the United Kingdom has been able to thumb its nose at the European Union with its AstraZeneca-Oxford vaccine. Obviously, this geostrategic competition would not exist, if there had been global coordination for vaccine distribution. But up to now, it has been every country for itself.

The Chinese government makes no secret of its ambitions. Vaccine cooperation is a new direction in its foreign policy. China has signed vaccine supply contracts with at least 24 countries. In Europe, for example, Hungary has purchased 5 million doses (for 10 million inhabitants) and Serbia has acquired 1.5 million doses (for 5 million inhabitants). Beijing is also multiplying donations around the world. If there was any question about the geopolitical importance of vaccines in this pandemic, the proof is here.

Sputnik V is not only coveted by Russia's traditional allies such as Venezuela and Iran, but also by Europe, which now sees Russia as a potential, albeit unlikely, partner in the fight against the pandemic. Hungary, for example, has bought in. Palestinians have received donations of the Russian vaccine and will buy more.

India is a veritable vaccine factory. It manufactures large quantities of vaccines for the British company AstraZeneca-Oxford. It is now giving them to Nepal, Bangladesh, Myanmar, Sri Lanka and even Afghanistan. Countries that would not normally be able to afford them. Delhi has pledged 200 million doses for the Covax program that the World Health Organization (WHO) has set up to ensure equitable access to the vaccine for developing nations. China will donate 10 million doses.

The WHO has just granted emergency approval of AstraZeneca's vaccine -- and Health Canada just approved it on Friday. This allows the Covax program to begin distribution, and, thus, to finally initiate global coordination. AstraZeneca's vaccine accounts for the vast majority of the 337.2 million doses of vaccine that Covax plans to distribute in the first half of this year. Considered less effective than the vaccines from Pfizer and Moderna, it has experienced setbacks and doubts about its effectiveness for people over 65 years of age, as well as its performance against the latest variants, but it has the enormous advantage that it can be stored with conventional refrigeration.

The United Nations Security Council discussed the problem of supplying vaccines to underdeveloped countries on Wednesday, Feb. 17, and this topic was on the agenda of a virtual meeting of the G-7 leaders two days later. Many good intentions were expressed by the participants, in particular, increased funding from G-7 members. It remains to be seen whether this will lead to coordinated action and whether there will be any change in national programs. It is hoped that a UN resolution to call for a ceasefire in conflict areas to facilitate vaccinations, will also result. According to recent UN figures, 10 countries have administered 75 per cent of the available vaccines. 130 countries have still not vaccinated!

Obviously, countries like Canada that do not produce vaccines against Covid are out of the loop of this new type of diplomacy and are reduced to chasing after suppliers for their own needs. Ottawa will even take vaccines from the Covax program!

Some countries have signed agreements with AstraZeneca to manufacture its vaccines. Sixteen nations such as Australia and Mexico, have done so, but not Canada. Our pharmaceutical industry has deteriorated too much in the last few years to the benefit of other producers. Canada can only follow the others, confirming our international powerlessness in this field.

- François LaRochelle is a former Canadian diplomat. He is a Fellow at the Montreal Institute of International Studies at the Université du Québec à Montréal (UQÀM).