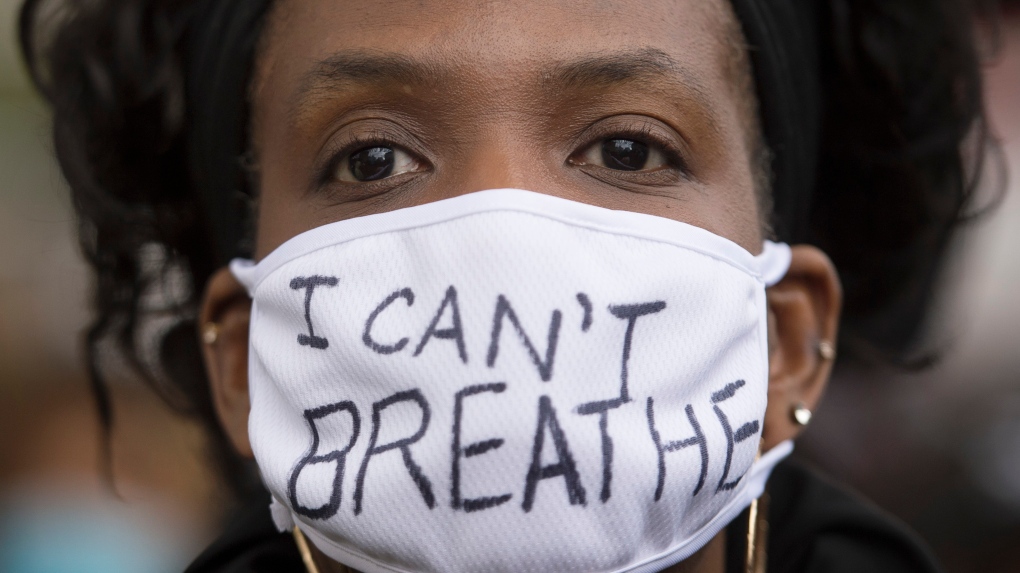 A woman attends a demonstration calling for justice for George Floyd in Montreal, Sunday, May 31, 2020. (THE CANADIAN PRESS/Graham Hughes)

QUEBEC CITY -- Following George Floyd’s brutal death at the hands of a Minneapolis police officer last week, difficult, often painful conversations about racism are taking place again, as they often have in recent years in the wake of successive police killings of Black people.

But this time, something feels different, as if we’ve reached a tipping point. Many of us feel broken. I have never heard so many of the Black people in both my personal and professional circles saying they’re not okay; that they simply cannot cope with the videos, images and comments they absorb on social media; that they’ve been struggling to manage both simmering rage and profound sadness; that they have wept; that they are beyond exhausted, yet can’t sleep at night. It’s ironic; the crushing mental fatigue caused by all these high-intensity emotions is keeping us wide awake. The pain is raw and real.

We also discuss labels in these conversations. “Angry Black Man.” “Angry Black Woman.” We talk about how we try to police our own behaviour and go to extremes to avoid acting in ways that could be misinterpreted or poorly received, and give people further ammunition to reduce us to a stereotype. We feel we must hide any anger, however legitimate, at all costs. It’s like wearing an emotional straitjacket. We ask ourselves: How often have we kept quiet to keep others comfortable and make sure they’re not offended by our reality, by our lived experiences.

As a Black journalist, I and many of my colleagues have hesitated and held back – confiding only in those we trusted because we assessed the risks and feared the possible consequences on our careers.

Now we feel compelled to speak out.

Pointing out certain facts – and that is what they are – will cause some to bristle and accuse us of “playing the race card.” Whether intentional or not, that accusation is yet another tool that serves to silence marginalized groups and invalidate their experiences and perspectives.

Real, unfiltered discussions about race can be jarring – especially when they challenge long-held notions that appear virtuous, but are in fact harmful.

“I don’t see colour,” may seem like the morally decent thing to say, and it may be genuinely well intentioned.

But it fails to acknowledge the myriad ways in which Black people experience the world differently precisely because of the colour of their skin.

It starts early. As a new mother to a six-month-old boy, I already wonder what exactly I’ll say to him when he gets older. Black parents have to have “The Talk” with their sons, a conversation that stresses how carefully to behave in an encounter with police, or even how one should dress in public to avoid trouble. (i.e. “Don’t leave the house wearing a hoodie.”)

Black parents teach their children they have to be twice as good and work twice as hard in order to achieve success and be afforded the same opportunities as their white peers. There is no room for error.

Racial slings and arrows aren’t always as odious and blatant as someone calling you the N-word. Sometimes it’s someone suggesting you straighten your tightly coiled natural hair, in order to be more palatable to viewers. Just ask any black female television personality. You’ll hear the stories.

As a white friend and colleague so eloquently put it in a recent social media post, “I grew up taught that skin colour did not matter, that we love and accept everyone as humans. I commend my parents for it, they were right to want me to see everyone as equals – but it is not the truth.”

THE TOLL 'OBJECTIVITY' CAN TAKE

Last fall, I had an email exchange with a fellow Black journalist. Blackface was the “sujet du jour.” Twitter was a minefield. We commiserated. I didn’t use social media to express my personal opinion on the issue. As journalists, we generally keep our opinions to ourselves and out of our work. It’s one of the basic tenets of what we strive for: objective newsgathering and reporting. But reading a deluge of hateful, ignorant and patronizing comments on a public platform – and staying silent about it – privately takes its toll.

“I can only bite my tongue, lest I be accused of lacking objectivity or professionalism in my coverage of a sensitive race-related issue. It’s extremely draining,” I wrote.

He responded that he didn’t think it should be necessary or encouraged for Black journalists to avoid speaking out. He argued we should be “defending ourselves against bigotry, passive or overt”, and the suggestion that our objectivity was compromised in doing so was yet another way in which Black voices were being systematically suppressed.

As I reflected on that point of view, I took solace in the many pieces I read that articulated how I was feeling. Beisan Zubi, for example, wrote about Canadian media and argued there should be more journalists of colour covering politics.

“I see people of colour carrying the burden of not only trying to create representation and amplify non-white voices in a culture that only calls on us when it feels like it could be gauche not to, but also working through their own traumas in public and uncomfortable ways,” she wrote.

She expressed a longing for “the day when journalists of colour aren’t tokens or rarities; when issues of race are covered thoughtfully and with nuance; when we think of how meaningful representation can be…”

The desire for more nuanced coverage resonated with me. Loaded statements and sweeping generalizations aren’t helpful when dealing with these polarizing topics. They poison opportunities for fruitful discussions.

When race issues dominate the headlines, and you are a person of colour covering them, it is always exhausting and emotionally taxing. Traumatic, even. When it happens, I know I am not alone. Black colleagues and friends from various media outlets reach out to one another. We vent extensively about how frustrated we are, and how tired. We rally around each other, trying to keep morale up.

Inevitably during these private conversations about racism, profiling, and more subtle forms of prejudice, we share our own personal experiences. For the journalists to whom I have spoken, the truly egregious incidents are rare – but they occur. Like the time a Black male reporter covering a story at a courthouse was stopped by a constable before entering the courtroom, assumed to be the person about to make a court appearance, and not a journalist assigned to the story. “Where is your lawyer?” the constable demanded. The white journalists all entered the courtroom freely, without being questioned. This was the first time it happened to the reporter, but it would not be the last.

There’s the time a Black female reporter was left humiliated and in tears after she was singled out on Twitter as a "foreign journalist", assumed to be from abroad when she was in fact born and raised in Canada. Adding insult to injury, this was meant to be a compliment. The person was praising the interview style of this purported "foreign journalist."

So-called compliments that are actually insults sting in a different way. It may seem banal and innocuous, but when someone tells a Black person, "You speak so well", with an air of surprise, it is condescending and offensive because the implication is that it was unexpected.

Pinned to a bulletin board in my office is a page photocopied from The Elements of Journalism: What Newspeople Should Know and the Public Should Expect. Written by Bill Kovach and Tom Rosenstiel, it is a well-respected handbook that has guided generations of journalists. As I grappled with whether I should write this, I focused on two of the ten elements: “Journalism’s first obligation is to the truth” and “Its practitioners have an obligation to exercise their personal conscience”.

There is so much talk about privilege these days. There are many facets of it. I am privileged to have a platform. I am also privileged to work in a supportive environment, and feel accepted for who I am by caring people who are always open to my ideas and to hearing what I have to say – which is why I ultimately felt the freedom to write this piece in the first place.

Not every person of colour has that luxury. That is the hard truth.

Maya Johnson is the Quebec City Bureau Chief for CTV News Montreal. She is currently on maternity leave.