One killed, four injured in two crashes in Laval 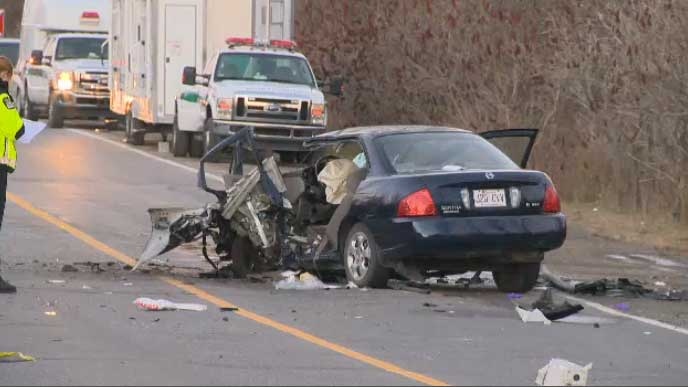 One man in his 20s was killed after an accident in eastern Laval.

MONTREAL—A driver was killed in a head-on collision in the St-Francois district of Laval early Saturday morning after he veered into oncoming traffic.

According to the Laval police, the 26-year-old driver was killed and another driver in his 30s was taken to hospital with serious injuries after the 3:30 a.m. crash.

Investigators were at the site of the accident after dawn, examining a gruesome scene where both cars were twisted from the force of the collision. A bright spot of blood was visible on the driver’s airbag of one of the cars.

A long stretch of Marcel-Villeneuve Ave. remained closed to traffic for most of Saturday morning.

In a separate incident on the 15 Highway in Laval, three people were injured after a sedan clipped an electronic billboard on the northbound side of the highway and smashed into a concrete barrier. The accident late Friday night was just at the foot of the Gedeon-Ouimet Bridge.