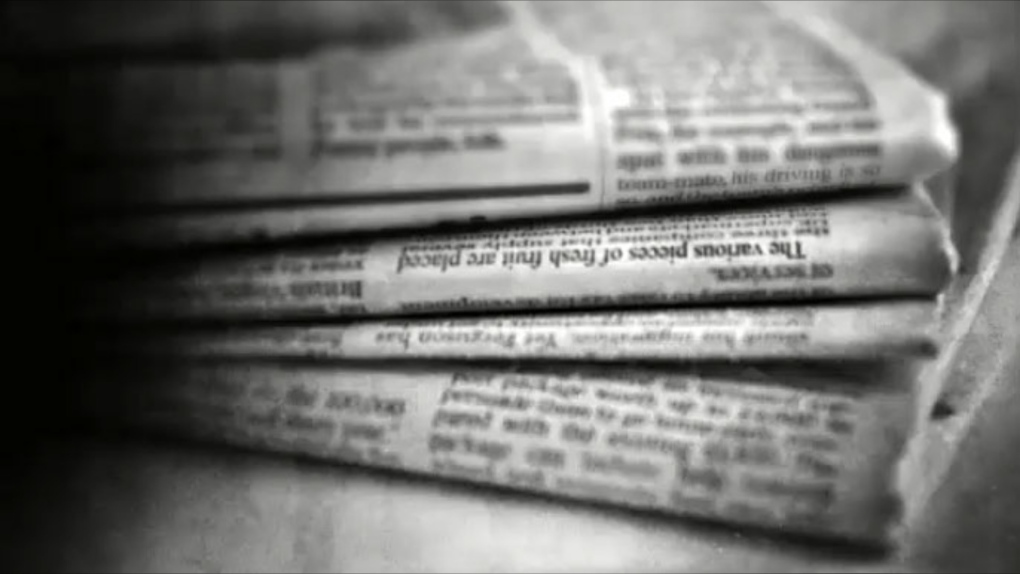 MONTREAL -- The Quebec government welcomed the results of a new commission on the future of news media in the province on Tuesday.

In its report, the commission points out the steep decline in advertising revenue for daily and community newspapers, and suggests spearing two problems with a single thrust by encouraging the government to invest in COVID-centric advertising in the smaller Quebec papers.

This is not a new issue. In the last decade, written media in Canada has had a hard time making ends meet. Since 2010, the take in net advertising for daily newspapers fell by almost 66.5 per cent, plummeting from more than $2 billion to just $777 million, according to News Media Canada (NMC).

Community papers were less hard hit by the loss, but still saw their ad revenue diminish by more than 45 per cent in that same time.

While daily and community news have been struggling, however, they continue to play an important role in the media lives of Quebecers. Indeed, while Internet news have become very prominent in advertising, not everyone has access to online media.

“In many parts of Canada and in Quebec, broadband access is limited,” said John Hinds, the CEO of NMC. “Many sectors of the population, some of which are most relevant to the government’s communications efforts, are not online.”

The commission highlights this as well, warning that the decline of written media could create “media deserts” in more remote areas, and this possibility is closer than you might imagine.

According to the commission’s report, the number of weekly or bi-weekly newspapers in Quebec was almost cut in half between 2011 and 2018, falling from 200 to 132 publications. This hasn’t been a death knell to the written news industry, however.

“I think that there's a big fallacy out there that the print newspapers are having some challenges,” Hinds said, “but the challenge is not that people don't read them. Nine out of 10 Canadians and Quebecers read newspapers. They're interested in the content and we have the same reach as the digital diet from the United States.”

The issue, Hinds says, is more one of convenience. Online advertising is quick, easy to do, and requires little commitment. By comparison arranging for an ad to be printed in a newspaper is more difficult and time-consuming, although it also benefits the domestic industry more strongly.

The commission seemed to agree in its report, pointing out that declining newspapers could also have knock-on effects on other parts of the industry. If most of these papers disappear, for instance, it could mean a significant loss of income for the Canadian Press who sells wires on Canadian news to smaller outlets that cannot cover these events. On top of that, losing outlets also means losing media diversity in the province as a whole.

“In Quebec, we have a very diverse press,” said Michaël Nguyen, the president of the Fédération Professionelle des Journalistes du Québec (FPJQ). “There’s something for everyone, for every point of view.”

“We’re quite well-serviced in terms of information in Quebec,” he added. “We have to maintain this (…). It’s a whole ecosystem and all of its parts are linked together.”

The commission did not make specific budget recommendations in its report, although last year the provincial government had floated the idea of investing $250 million over five years into the industry. This year, government money is used to buy ads that inform Quebecers about COVID-19.

While this kind of investment is a good first step, however, Nguyen says it must be a sustained effort if newspapers in Quebec are to thrive again.

“This year is quite exceptional,” Nguyen pointed out. “And we can’t expect investment to always be this positive.”

And continued investment is certainly one of the most needed steps beyond this year.

“We have to maintain the quality of information we have in Quebec, which is our pride” Nguyen added, “Whether in francophone or anglophone media, we have to carry on. The report already says that the government maintains and improves advertising subsidies, and that it’ll take more than that.”