Montreal might not have made the top 10 list of the worst roads in Quebec this year, but talk to any resident and they'll tell you that they're used to dodging craters and other crevasses big and small while navigating the city's streets.

Now, there is a new online tool to help track them in real-time.

The Montreal Pothole Reporting Tool not only tells you where the potholes are, it also lets you know once they've been fixed using crowdsourced reports and photos from people on the street.

The tool is the brainchild of Spatial Media, the same company behind an interactive map that showed the environmental impact of the trucker convoy demonstration in Ottawa last February.

Aaron Bernard, the company's creative and managing director for North America, said the Montreal pothole project is geared mostly toward cyclists, even though potholes annoy drivers and bike users alike.

"If I'm going to be cycling across the city, I can open this up and I can see how many potholes will be in my way along my journey," Bernard said in an interview. 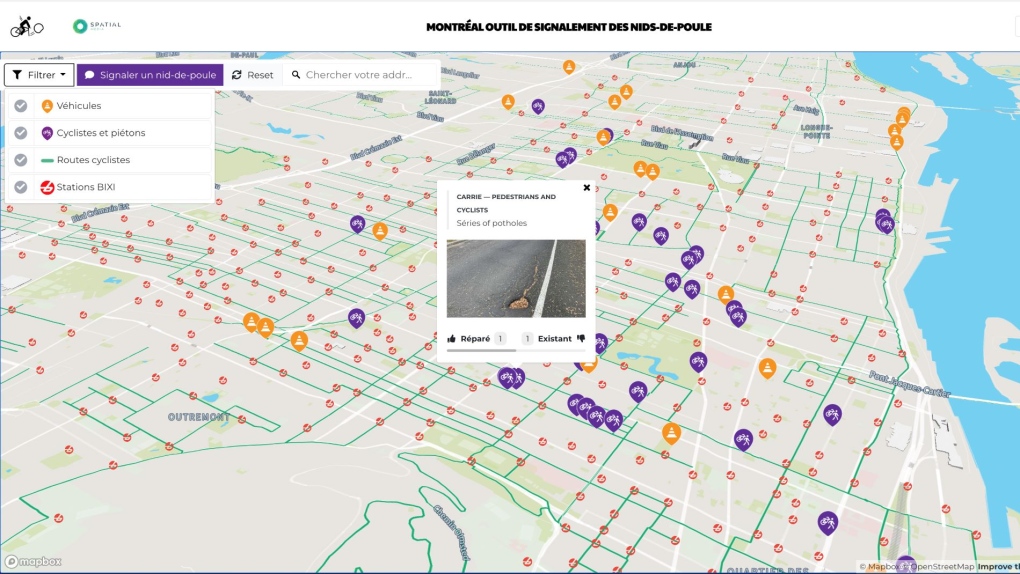 Purple and orange markers flag where a pothole has been reported by a member of the public. (Photo courtesy Spatial Media)

The Montreal Pothole Reporting Tool is not the only way people can report potholes in the city. The City of Montreal has a webpage dedicated to user-generated reports that include a description and location of the road flaw.

There's also an Instagram account, @potholesmtl, that uploads photos of Montreal craters from members of the public, along with a tongue-in-cheek description.

What is unique about Spatial Media's tool is that the map is interactive and people can mark potholes as "fixed" or "still there."

The map is dotted with purple markers flagging potholes affecting (and uploaded by) cyclists and pedestrians, while orange cones — a Montreal favourite — tag holes reported by people travelling in vehicles.

"Sometimes you're in traffic and see the same ones over and over every single day and I think people just get frustrated," Bernard said. "With the cyclist community specifically, it is kind of tight-knit. They do rides and nighttime rides and things like that and it would really be helpful for people to be able to — especially at night when you can't even see the potholes — to be able to launch the [website] and see what's going on."

It's no secret that Quebec roads are notorious for being poorly built and maintained, with some having the look and feel of a slice of aged Swiss cheese.

There's even a study that backs up that claim.

The Canadian Automobile Association (CAA) crowned Quebec as the province with the worst roads in Canada following a study released last year.

It found that Quebecers are paying upwards of $1.4 billion each year for poor roads and that the average driver spends about $258 annually to maintain their vehicle — more than double the Canadian average.

Last December, a strip of road in Montreal leading to Highway 20 West left two drivers stranded with blown tires on the same day.

It's one of the reasons why Montreal was chosen as the first city for the pothole project, Bernard said, adding several members of his team live in the city.

"They said, you know, when we cycle across town, it's like cycling on the moon," he said.

Bernard noted the long-term goal is to track the number of potholes by neighbourhood and how many the city is able to repair by the end of the season.

If it's successful, the map could launch in other Canadian cities.