One of the Montreal’s oldest sports clubs is getting a multi-million-dollar overhaul that developers say will save it.

Club Sportif MAA was founded in Westmount in 1881, and moved into its current location on Peel St. in 1905.

Though the high-end gym may have a modern look, the facilities need upgrades, said Pierre Blanchet, president and CEO of the Club Sportif MAA.

“We've spent a fair amount of money, like $3 to $4 million, renovating over the years, but never being able to give back to the members what they really deserve,” he said.

The redevelopment is being launched in partnership with Devimco, a real estate company, which will be incorporating more than 300 condo units on 31 residential floors.

The project and carries a $150 million price tag, $20 million of which is reserved for upgrading the sports club.

“I teach spinning,” said sports director Nathalie Lambert. “For instance the ventilation and the temperature in the studio is awful, the electricity is awful, some of the floors are pretty bad. Not that they were neglected, it's just an aged building.”

The club is one of Canada’s most well-known and most storied – the country’s first Olympic gold medallist, Etienne Desmarteau, trained there before winning the hammer throw in the 1904 Games. The MAA teams won four Stanley Cups (1893, 1894, 1902, and 1903) and a Grey Cup in 1931. It was also voted best fitness club in the country by Reader’s Digest in 2006.

The sports club will be expanded to 45,000 square feet, and the swimming pool will be extended to 25 metres.

The façade of the building is expected to be untouched.

“The high ceilings, the wood work and all that will be maintained, so that members don't feel like they left and come back to something that's strictly glass and ceramic,” said Blanchet.

Its 2,800 members will be temporarily relocated when work begins in August 2019. Construction is expected to be completed by 2021.

Take a peek at the club's historical past: 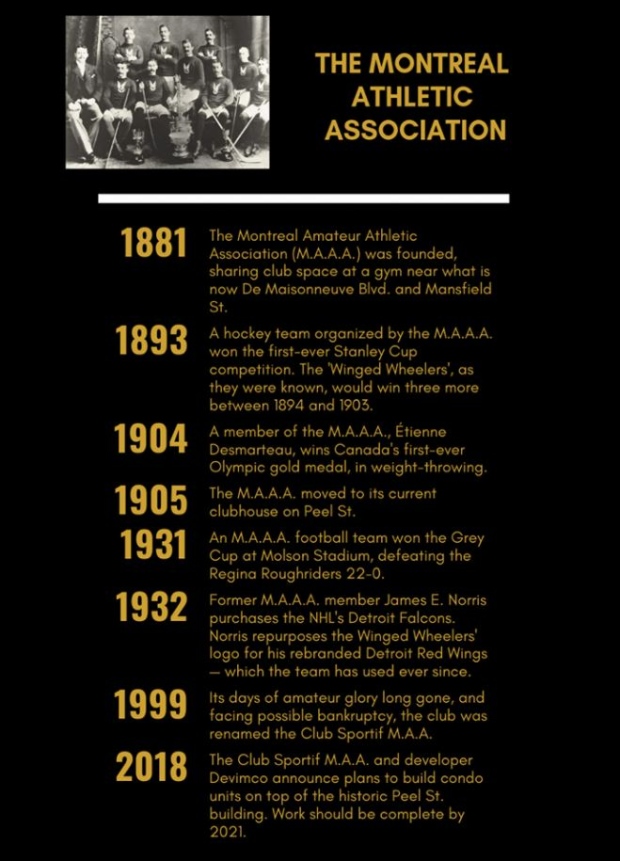