MONTREAL -- On Thursday, Montreal reported its highest number of new COVID-19 cases in a 24-hour period, with 648.

That brings the total number of cases in the city since the start of the pandemic to 55,908, and 3,688 people have died.

“We have a rapid increase in the number of cases,” said Montreal public health director Dr. Mylene Drouin at a news conference on Thursday. “I think in the last week, (there has been) a significant increase.”

The city is currently dealing with more than 268 outbreaks in educational centres and workplaces -- but Drouin said they are well controlled and don't involve many people.

The problem, she said, is with the outbreaks in long term care homes (CHSLDs) and retirement homes (RPAs), that as of Thursday have 18 and 15 outbreaks respectively.

"They are bigger outbreaks, more difficult to control," Drouin said.

The distribution of cases in Montreal seems to be in all age groups, Drouin said, with the highest being among youth and people over 85.

“The good thing is that we do not have an increase in the rate in the group of 65 to 84 years old in the community,” she said. “I would say this makes me happy.”

Activities in operating rooms have been reduced, said Sonia Belanger, the director of health-care institutions for the Montreal region.

That's because there are currently 279 patients being treated for COVID-19 in Montreal hospitals, including 41 in the intensive care unit, she said.

"Last time we spoke, less than two weeks ago, we just broke the 200-bar. It's a serious increase," Belanger added. “The numbers have been consistently rising for the past weeks, so you can understand why we must reduce our activities in operating rooms." 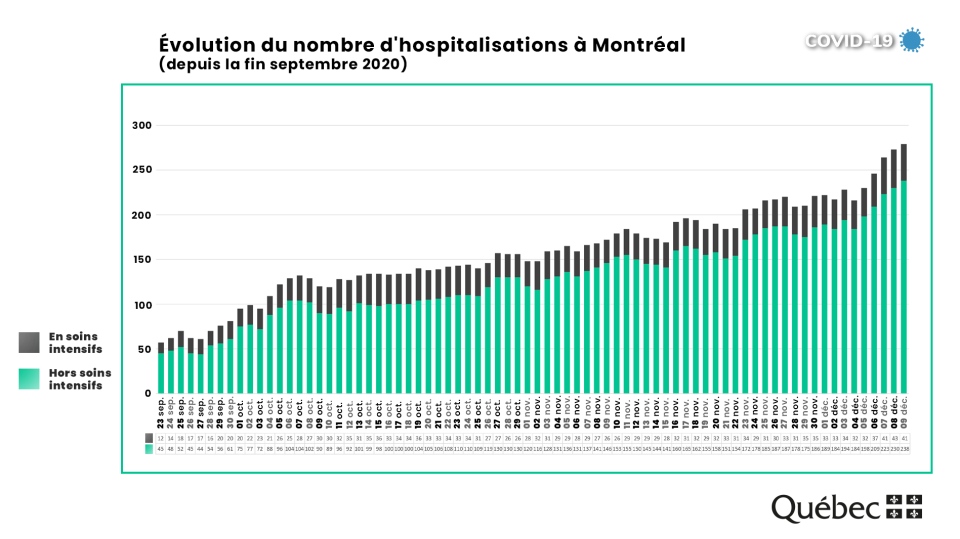 “I would like to clarify that all emergency surgeries are maintained, for example someone comes to emergency with symptoms of heart attack or stroke will obviously be seen,” she said.

The city's public health network will be ready to start vaccinating people in Montreal as soon as vaccinations arrive in the city, Belanger said.

Premier Francois Legault pointed out at a Thursday evening news conference that regional trends in COVID-19 cases are beginning to resemble those during the first wave, hitting cities harder than other areas.

That's why his government is mulling over the idea of closing retail stores for a few weeks in December and January, he said.