Sunday may have been a great night for newly reminted Montreal Mayor Valerie Plante, doing a victoy dance onstage, but a few hours away, what looked like a similarly fairy-tale night went badly awry.

Marie-Josée Savard, a Quebec City mayoral candidate who had the blessing of popular outgoing mayor Régis Labeaume, also made a victory speech -- after her win was declared by some media -- before having the moment yanked away.

"Mayor for two hours," read some headlines in French-language media on Monday, trying to retrace how things could go so wrong.

"I'm feeling for her this morning," wrote radio personality Daniel Brouillette of 96.9 CKOI on Facebook, even calling it likely "traumatic" for her.

"Experiencing a defeat is already difficult... I hope the media companies that push themselves to be the first to declare victory on election nights take note of this."

He was running with the Quebec Forte et Fière party, which is somewhat akin to Plante's Projet Montreal in its emphasis on greening the city, both in terms of parks and carbon output, and in comparison to Labeaume, who leans more to the right. 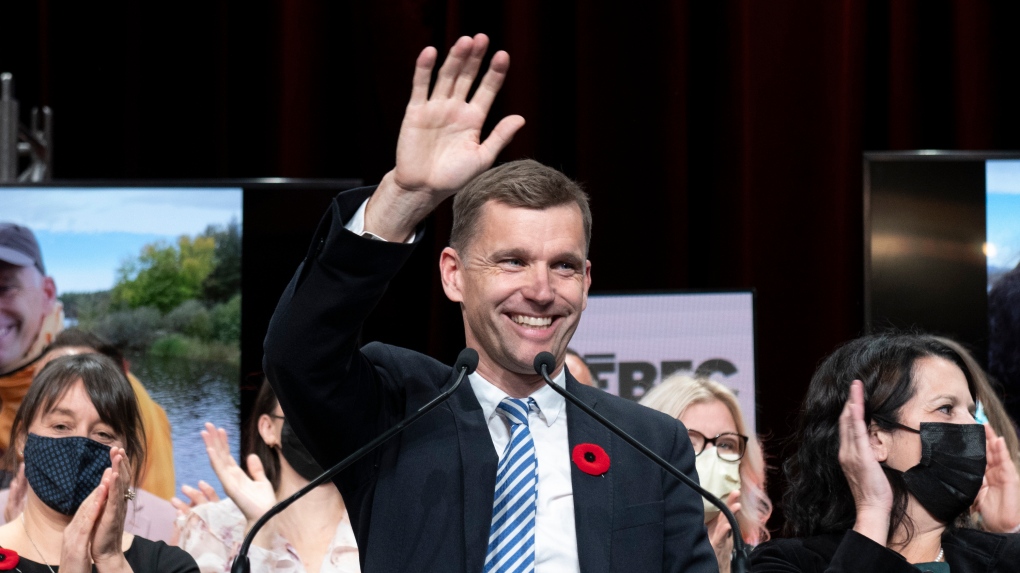 Bruno Marchand of the Forte et Fiere party reacts after he was declared winner of the municipal election of Quebec City, in Quebec City, Sunday, Nov. 7, 2021. Marchand won over Marie-Josee Savard in a very tight race. THE CANADIAN PRESS/Jacques Boissinot

By the time voters' choice was clear, however, Savard had already spoken, jubilantly thanking Quebecers for their support.

"I can't wait to be sworn in to continue to work and to change offices," she said in her speech, joking about how her current councillor's office is right beside the mayoral one.

Even Premier François Legault congratulated her on Twitter, before tweeting again last in the night to say he'd been too hasty, even using the emoji that signifies a person stress-sweating and smiling nervously.

Savard conceded defeat on Monday morning and said she wouldn't ask for a recount, as well as telling media she won't be making more statements about the outcome.

"The torture has lasted long enough," wrote Brouillette. "What a smart woman!"

The two outlets that prematurely declared the victory, Radio-Canada and TVA, both issued statements Monday saying they were sorry.

Radio-Canada also said it would examine how to prevent doing the same in future.

"Our decision desk rigorously followed the usual process,'' Luce Julien, Radio-Canada's executive director of news and current affairs, said in a statement published in English by the CBC.

"We will look for the answers to all our questions to explain what happened. We will communicate all the explanations with the public as soon as we have brought them to light.''

TVA News defended their actions by saying they were going by "the trend" and that "all media" do the same.

That's not quite right -- many media wait until a victory would be extremely unlikely or nearly impossible, statistically speaking, based on the number of uncounted votes.

"At the time Ms. Savard was declared elected, a significant number of [polling stations] had been counted and the trend was holding," the network wrote in a statement.

"She was more than 5,000 votes ahead. When the trend reversed itself, we corrected the situation," TVA said.

"Like all media, we declare candidates elected based on trends. We are sorry for this regrettable situation."

'WHEN I PUT MYSELF IN HER SHOES, IT'S CRUEL'

The trajectory of the night would have been unexpected even without the flip-flop in results. At the time Savard's victory was falsely called, Marchand first appeared to be in third place, behind Jean-François Gosselin.

Marchand told media on Monday that his party knew the first votes reported were the mail-in ballots, so they were holding out some tiny hope that the outcome would change -- but after all, they'd already been declared the losers, he pointed out.

He wrote eight versions of his election-night speech, he told Radio-Canada. The emotionally draining experience gave him a lot of empathy for what Savard also went through.

"It was a roller-coaster evening for her and for us. I really have a thought for what she may have experienced," he told the outlet.

"It's cruel. When I put myself in her shoes, it's cruel."

The two would talk on Monday, he said.

Late Monday afternoon, Marchand was also officially congratulated by Legault and by Plante, who issued a statement congratulating all the province's newly elected big-city mayors, apparently once it seemed safe to do so.

'Not parent expected': When a DNA test brings distressing results

While genealogical DNA tests may be marketed as harmless and exciting way for people to learn more about their ancestral heritage, CTVNews.ca speaks with a Canadian researcher who says more support is needed for those who get unexpected results that have potential to disrupt family relations.

With Quebec confirming an additional 10 cases of monkeypox identified in the province, the Public Health Agency of Canada says they are monitoring a total of 15 cases across the country.

Johnny Depp called his ex-wife's accusations of sexual and physical abuse 'insane' Wednesday as he returned to the witness stand in his libel suit against Amber Heard.

Prime Minister Justin Trudeau says his 'heart breaks' for those impacted by the 'horrific' shooting at an elementary school in Texas that killed 21 people on Tuesday.

Golden State Warriors coach Steve Kerr refused to talk about basketball at a pre-game news conference on Tuesday and instead called for stricter gun control after the killing of at least 18 children and an adult in a Texas school shooting.