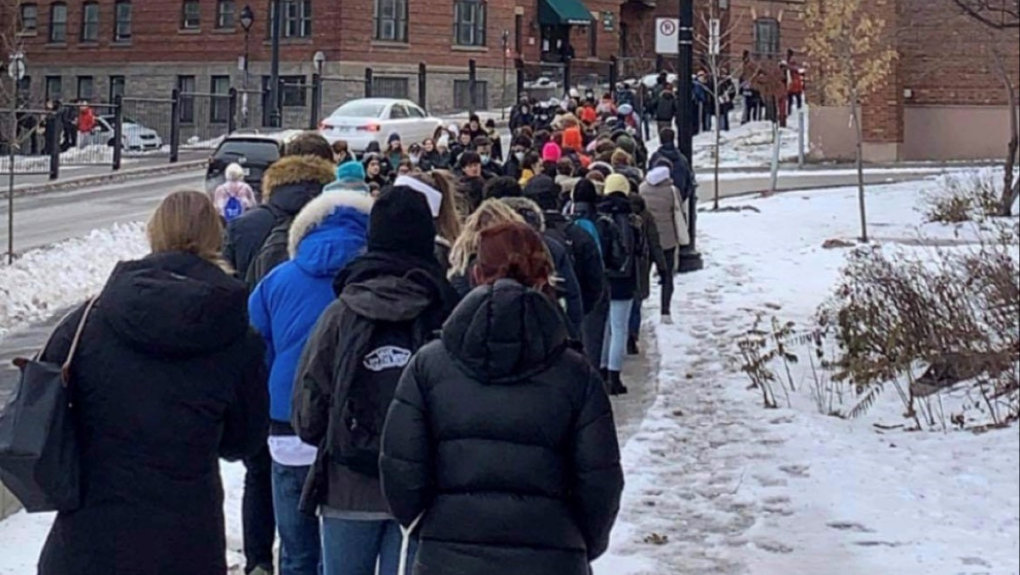 McGill University students were forced to line up in the cold as their exam sessions began Dec. 8, 2021. Some are asking that exams be issued online.
MONTREAL -

On a cold winter day last week, McGill University students arrived to take final exams only to find a lineup stretching almost a kilometre along Pins Ave. to get into the exam room.

An online petition was launched calling on the university to switch to online exams for their finals, citing safety concerns related to rising COVID-19 cases.

"First-hand accounts of students returning to campus for in-person midterms report sitting in a crowded lecture hall with hundreds of their peers, scribbling their answers as they rub elbows with their neighbours," reads the petition posted to the change.org website. "Only to find out a few days later (by email from McGill) that they have been in contact with a reported case of COVID-19. It is almost expected to receive this news under these conditions."

This is absolutely outrageous. What were you thinking @mcgillu ? How can you make these stressed out freezing kids endure this? pic.twitter.com/mnl4LyTjO6

McGill said on its Twitter feed that the university is addressing the issue after videos and images began circulating.

"We have listened to the feedback re yesterday's exam issues (downtown) and have implemented new entrance protocols beginning today to resolve problems identified," McGill wrote on Wednesday.

#McGill | Exam update from the McGill Registrar: "We have listened to the feedback re yesterday’s exam issues (downtown) and have implemented new entrance protocols beginning today to resolve problems identified. 1/2

On Tuesday, there were no lines outdoors as the change in entrance protocol seemed to have worked.

McGill's exam policies state that each exam room will have adequate circulation and the university has measured CO2 levels in its buildings.

In addition, only 90 per cent of classes will hold in-person exams that will all have mandatory mask requirements and that masks should be swapped every four hours.

McGill's COVID-19 situation dashboard reports that 12 cases were detected on campus between Dec. 5 and 11 and no cases were linked to McGill classrooms. The school said 92.2 per cent of McGill staff and faculty were adequately protected as of Dec. 9 along with 94.9 per cent of students, and that the case management group contacted 173 individuals, who were at "low risk" of contagion between Dec. 5 and 11.

"We continue to remain vigilant and monitor in the event the situation changes," she said.

Those unable to write an exam due to a "serious health or wellness condition" can apply for a deferral.

Students from the school, however, are asking why McGill is holding in-person exams when classes were moved online for the fall semester.

"As we move into final exams this week, McGill has decided to continue with in-person exams for large classes, despite the students learning the material online in the name of their 'safety,'" reads the petition signed by over 2,800 people.

Concordia University used a hybrid model where those that took their classes online had their exams online, according to spokesperson Vannina Maestracci.

'It was a chaotic situation': Toronto man stuck in Turkiye recounts earthquake