Mayor's gift to ex-wife: a 20-ton boulder on her lawn, wrapped in ribbon & note 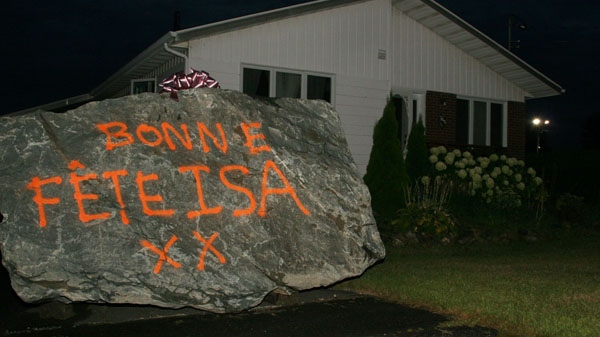 The mayor of St-Theodore-d'Acton, east of Montreal, says he left the rock on his ex-wife's lawn as a birthday present. (Courtesy: Voix De L'Est)

ACTON VALE, Que. - Quebec police are investigating after a small-town mayor reportedly dumped a gigantic boulder onto the lawn of his ex-wife.

The mayor of St-Theodore-d'Acton, east of Montreal, told a local newspaper he left her a rock of about 20 tons as a birthday present.

He joked that his wife had always wanted a big rock _ and he quipped that this one is, in his words, between 18 and 24 "carat-tons.''

The woman called police to file a complaint after discovering the delivery Sunday morning.

The boulder is topped with a pink ribbon and covered in a spray-painted message: "Happy birthday, Isa.''

Police tell The Canadian Press that their suspect has refused to remove the boulder. They say they are considering laying charges of harassment or mischief, as well as possible highway-code violations.

The mayor owns an excavation company in town.