Man in his 60s dead after tornado causes 'significant damage' in Mascouche, Que.

One man in his 60s has been killed and at least two people are reported injured Monday after a tornado ripped through the Mascouche region, north of Montreal.

Quebec's public safety minsiter Genevieve Guilbault confirmed in a tweet Monday evening a man was killed in the tornado and said officials from the provincial government are offering assistance to off-island suburb. 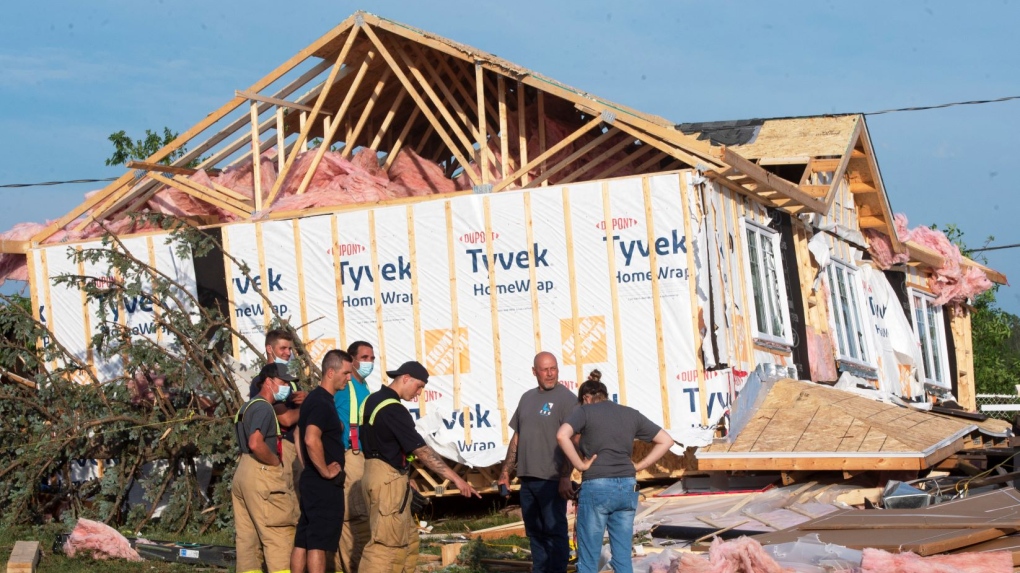 People look over the damage after a tornado touched down in Mascouche, Que., northeast of Montreal, Monday, June 21, 2021. Dozens of homes were damaged and one death has been confirmed. THE CANADIAN PRESS/Ryan Remiorz

People look over the damage after a tornado touched down in Mascouche, Que., northeast of Montreal, Monday, June 21, 2021. Dozens of homes were damaged and one death has been confirmed. THE CANADIAN PRESS/Ryan Remiorz

The man who died, a father of three children, was outside when the twister tore down his street, so he tried to flee to safety in his shed but was killed when the funnel cloud passed over.

A home under construction was also blown off its foundation, while the tornado snapped large trees like twigs and downed hydro poles in its path as it swept through the centre of the city.

Neighbours told CTV news it all happened in a matter of seconds.

"I opened the door when I heard a loud noise," resident Alexandre Levesque told CTV News. "I saw this cloud in front of me, everything up in the air flying, swings, chairs. I tried to close the door, but the pressure was too high, wind went in, blew out the windows."

The city's mayor, Guillaume Tremblay, said two other people also have minor injuries and is asking anyone who does not live there to avoid the area.

Environment Canada spokesperson Peter Kimbell confirmed a tornado touched down on the off-island suburb 46 kilometres north of Montreal around 4 p.m.

Philippe Meunier told CTV News his daughter spotted a tornado in a residential area of Mascouche around 3:45 p.m.

Photos on social media show extensive damage to certain streets that were littered with debris as as residents assessed the aftermath of the tornado into the evening. The Red Cross said it has provided assistance to more than 50 people for food, shelter and clothing.

The tornado caused "significant damage" to the city, according to Urgence Quebec, which urged residents to be on the lookout for debris and electrical wires on the road.

By late afternoon, Hydro-Quebec reported 198 power outages across the province, 114 of which were in the Montérégie. Just over 50,000 customers were without power.

A tornado warning was also issued around 5 p.m. for the Lévis, Saint-Lambert and Lotbinière sectors in Chaudière-Appalaches, but it was withdrawn around 5:30 p.m.

Severe thunderstorm watches were still in effect early Monday evening for many areas of southern and central Quebec.

With files from Genevieve Beauchemin and The Canadian Press.

Family members are still searching for answers after the RCMP apologized for not properly investigating an Indigenous woman's death more than five decades ago.

Children ages 1-9 in London were made eligible for booster doses of a polio vaccine Wednesday after British health authorities reported finding evidence the virus has spread in multiple areas of the city but found no cases of the paralytic disease in people.