MONTREAL -- A man who walked into Quebec to seek asylum is set to be deported on Monday to what his lawyer calls “just about certain death,” at the hands of his own father.

Samer, a 33-year-old man originally from Jordan, tried to apply for refugee status on the grounds that he’s bisexual.

In a letter his lawyer says was filed at the Immigration and Refugee Board hearing, Samer’s relatives describe how he has “shamed the family,” and detailed how they’ll kill him if he returns home: by burning him or throwing him off a building.

“I’m facing death if I go there,” he said bluntly on Thursday, two days after his last appeal was rejected.

“They even know what time Monday I’m going to be deported from here. There’s no way I’ll escape.”

Samer didn’t want his last name published, nor photos of him, in order to avoid drawing more attention from his family in Jordan.

The problem, says his lawyer, is not that the immigration judges didn’t believe the evidence he provided. The problem is he wasn’t eligible to argue his case at all, though he didn’t realize that when he came to Canada.

In spring 2019, Samer walked into Canada over Roxham Road, the “irregular” border crossing from upstate New York that has acted as a portal for tens of thousands of people who would have otherwise been turned back at the official crossing, forced to make their asylum claim in the United States instead.

In an irony he only learned afterwards, Samer would have been much safer if he had remained in the U.S., which had allowed him to stay even after he served jail time for a serious car accident.

In Canada, “he has been judged to be inadmissible on the basis of a criminal conviction in the States,” said his lawyer, Stewart Istvanffy, on Friday.

Samer was in a car crash in Ohio when he was 18, a year after arriving in the U.S. He was the driver and the passenger, his best friend, was killed. He was convicted of vehicular homicide and served two years in prison.

Under Canadian immigration law, that renders him unable to make a case for asylum, said Istvanffy, regardless of the type of crime or his record since then.

“Canada has one of the most severe treatments of this idea of a criminal conviction making you ineligible,” Istvanffy said.

In his opinion, he said, his client’s crime was also “one of the biggest tragedies in his life and he’s paid for it fully.”

Canada’s Immigration and Refugee Board, which hears asylum claims, didn’t respond to a request on Friday to confirm its reasoning or to provide comment.

So why did Samer come to Canada at all? After living in the U.S. for 13 years, he walked away from his American work permit because, he says, he no longer felt safe—he went with a gut feeling that Canada would be better.

In May 2019, his electronics store in Cleveland, Ohio, was robbed, and the same people later returned, shot at the store and scrawled racist graffiti on the exterior, including “get out, f***ing camel jockey,” he said.

He had come out as bisexual while in the U.S. in his 20s and couldn’t return to Jordan.

Within a month of the robbery, Samer headed north, believing it was the best long-term option.

“He didn't really get advice,” said Istvanffy. “He’s what you call a Donald Trump refugee… he just rushed to the border and asked for refugee status. People think Canada protects refugees.”

The lawyer said he’s seen many cases of people coming through Roxham Road after living for years, sometimes decades, in the U.S., but facing new violence there.

After it became clear Canada would reject Samer, he asked if he could be deported to the U.S. instead of Jordan, but the U.S. wouldn’t allow it.

He’s filed an application to stay in Canada on compassionate grounds, but the deportation is scheduled to happen before they hear back from that, said Istvanffy.

At this point, the only way to delay the deportation is for an immigration administrator or the Minister of Public Safety, Bill Blair, to step in, he said.

A Montreal group that represents LGBTQ2S+ migrants and asylum claimants, AGIR Montreal, say they’re working on it, despite the holiday.

“It's a weekend and we're still pushing for it... we're trying our best,” said Iyan Hayadi of AGIR.

“They're basically sending a man to his death,” he said. “In Jordan there might not be a... law against homosexuality, but the theory versus the reality is very different.”

Samer deeply regrets his decision to come to Canada, and not just because of the imminent deportation. His past two years in Montreal left him scarred, literally.

Four times, usually for about two months each, Samer has been kept in detention, a measure taken, in some cases, when authorities decide a person may be a flight risk.

The first stint was at the Riviere-des-Prairies jail in east-end Montreal, a regular prison that also rents out space to the Canadian immigration system for migrants.

Samer says he was taunted with homophobic slurs there, and at one point, he said, a staff member at the jail groped him from behind in a sexual assault that has stayed with him. At one point he was put in a room with no toilet, just a hole in the floor, he said.

After release he spent eight uneventful months in Montreal until another hearing, after which, he says, a CBSA guard “pushed him into a wall” and called him a “f**got,” among other slurs, while putting him back in detention.

That was caught on surveillance camera, he says, and a supervisor assigned a different officer.

The CBSA told CTV in a statement that the Privacy Act prevents them from commenting on specific cases.

However, “we can tell you that… the Canada Border Services Agency (CBSA) holds its employees to a high standard of conduct and integrity at all times,” said spokesperson Judith Gadbois-St-Cyr.

“The Agency investigates all allegations of inappropriate behaviour and takes the necessary actions.”

"Samer is not the only one of our members who went through that," he said. "This is something that we hear about often."

A couple of months later, the pandemic hit. Samer suddenly got a new option, never before used in Quebec, that was offered to many migrants who happened to be detained last spring: they could be released, but only if they agreed to wear electronic ankle bracelets.

The CBSA introduced the bracelets as a “temporary measure,” it said at the time, but details were sparse.

Samer agreed, but after a few months wearing the ankle bracelet, it had irritated his underlying eczema and caused a grotesque skin infection. Pictuers from that time, shared with CTV, show a band of pus encircling his ankle.

After two letters from his doctor warning that he risked a bone infection or even amputation, the CBSA offered to put the band on the other ankle—where the same thing happened again.

Samer, who again spent part of this winter in detention, now has rings of permanent scars on both legs. 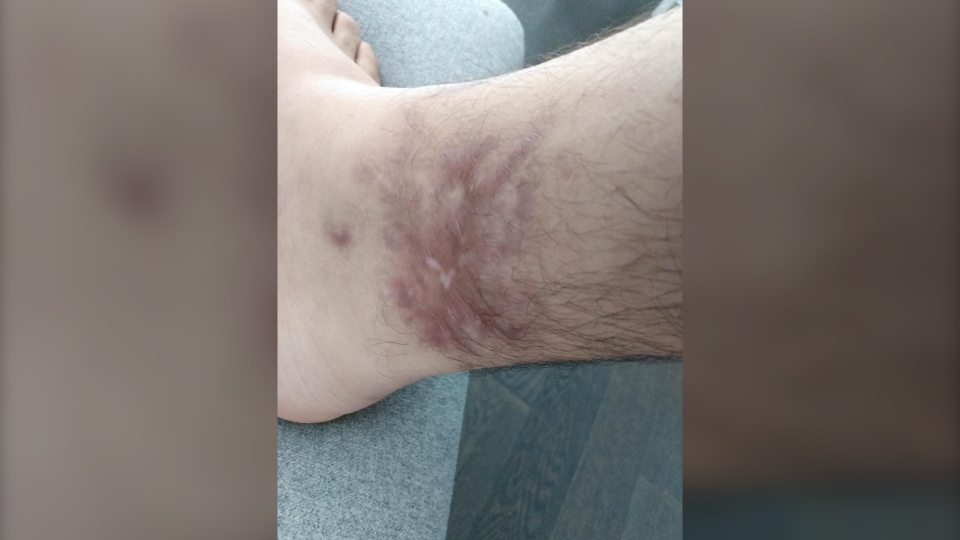 The scars left on one of Samer's ankles after the infection had healed (submitted photo).

Istvanffy said he was baffled and “ashamed” by the entire episode, as a Canadian.

“He's scarred for life,” said his lawyer. “He accepted this stupid thing [at the outset], but I don't know why we're doing this in this country.”

Gadbois-St-Cyr said that “where there is no public safety concern,” CBSA officers are asked to explore alternatives to detention, such as electronic monitoring.

By doing so, “the CBSA has made significant progress in securing the release of individuals who would otherwise have had no viable alternatives,” she wrote.

Samer said he acted impulsively when he came to Canada, and everything he imagined was wrong.

“We look at Canada like… there is a chance to start a new life or to be safe,” he said.

“If I had expected this treatment I wouldn’t be here right now.”