Legault offers 'moral contract' for Christmas, suggests Quebecers self-isolate before and after holidays

MONTREAL -- In a long-awaited update around Christmas rules, Quebec Premier Francois Legault has proposed a "moral contract" that depends on people's sense of responsibility.

"We propose to allow gatherings for four days, from Dec. 24 to 27, with a maximum of 10 people," Legault said in a press conference in Montreal on Thursday.

"But we ask people to limit their contacts as much as possible a week before and a week after," he said. "That way, when we see our friends and family, we'll limit the risk of contagion."

While some transmission will still happen, observing a strict week of self-isolation will greatly reduce the risks most people pose to their loved ones by seeing them, said Quebec Public Health Director Horacio Arruda.

"The incubation period can go to a maximum of 14 [days]," he said, "but it's mostly around five or six days."

That means that by staying home and avoiding all outside contact for a week, most infected people will have time for symptoms to develop and be alerted to any new cases among their recent contacts.

Of course, people who show symptoms of COVID-19 during that week should not attend any holiday gatherings, Legault said.

New Year's Eve parties will also be strictly forbidden, he said, since they would compromise the post-Christmas self-isolation period.

Many people can also be infected with COVID-19, but remain asymptomatic. The province will hold a technical briefing on Friday to explain more of the current research on transmission and to give details on what steps people can take to reduce their risks.

The province is changing some school dates to allow for these two periods of self-isolation.

All Quebec schools will physically close by Dec. 17 in favour of virtual teaching for the last few days before the holidays so that each family can have a one-week quarantine, Legault said.

The province will also mandate a longer school break after the holidays, but only for secondary students.

Primary schools will open across Quebec on the currently scheduled dates, and secondary schools will reopen on Jan. 11, though some student work will be given during that time, Legault said.

The province settled on this schedule since younger children don't have the attention spans and computer skills to do remote schooling as successfully as teenagers, said Education Minister Jean-François Roberge.

Daycares will follow the same schedule as elementary schools, with an exception for the children of essential workers such as health-care workers and teachers, Legault said. Those children may remain in daycare for their previously scheduled days.

The closure of gyms, theatres, restaurant dining and other red-zone restrictions will remain in place until at least January 11, Legault said.

The province is also asking all employers to facilitate this plan by allowing as much remote work as possible during the two weeks of planned self-isolation. Government employees will be doing the same, Legault said.

Arruda, speaking before the rules were clarified to allow for two gatherings only per family, said the holiday system was designed to be simple.

The province wanted to allow flexibility for people with shared custody or other family arrangements, heh said.

Rather than creating rules around "bubbles," limiting people to just one group they can see repeatedly, he said at first that Quebecers wouldn't have further rules around how many groups of 10 they may see.

However, Arruda repeated several times that just because the province is allowing some small parties, that does not mean "you...have to do the maximum that you can," he said. "Do the minimum."

The system relies on regular people trying to reduce the risks they take as much as possible, Arruda said.

"Don't say you're going to do a big party in those four days and we're in Carnaval," he said. "That's not what we're looking for."

The idea of the "moral contract" also includes taking careful stock of which people in your life face the most risk if infected, such as elderly relatives or those with underlying health issues, officials said.

Those people's health must be prioritized, and if they aren't comfortable attending events, that must also be respected, said Legault.

"It's possible that there will be some parents or some grandparents who are afraid, who think that it's too risky" and want to cancel family gatherings for the year, Legault said.

"Everyone in Quebec must respect these wishes."

DON'T RELY ON A TEST

Arruda also gave a stern warning that it's "dangerous" to rely on COVID-19 tests taken just before the holidays to feel "safe" and virus-free before gathering.

The reason, he said, is that the virus won't show up on the tests for the first few days, and there can be cases of false negatives among people who take tests right after being infected.

"Before the test becomes positive, it takes a certain time, and you're already contagious [during that time]," he said.

If you take a test, for example, "on the 23rd...then you go to a party, that is very dangerous," Arruda said.

"Do the confinement, as we've explained, and if you have symptoms, go get tested," he said.

"Do not rely on a negative test. That's a big mistake."

Two Montreal infectious disease experts said that it's crucial to have as few contacts as possible right now.

Dr. Matthew Oughton, who teaches at McGill University, said he thinks the Legault government is aiming for a pragmatic approach in the wake of what turned out to be a disastrous Thanksgiving experiment across Canada.

Though people were asked not to get together for that holiday, later case numbers and contact tracing showed that "by and large, Canadians did not follow that advice," said Oughton.

For Christmas, "I can understand the philosophy of trying to do a harm-reduction thing," meaning trying to minimize the harm while accepting that people will gather, Oughton said.

"But this kind of approach seems quite permissive."

He said he was especially concerned with the lack of limits announced at first over the four-day gathering period. If people had even one gathering per day at the allowed 10-person cap, that would have meant 40 contacts. "That high number of contacts is not the right way to go," he said.

The double-quarantine concept is a good one, he said, but a week is the bare minimum needed to reflect the incubation period. Some infections won't show up in that time -- there is a good reason it's usually 14 days, he said.

Another doctor based at McGill, Dr. Brian Ward, said earlier in the day that Quebecers need to have the seriousness of the risks reinforced.

People travelling from red zones to lower-infection zones are "clearly putting the people hosting you at risk," he said, and if you're interacting with elderly or at-risk people, you're putting them at risk, too.

"And what a lovely Christmas present to give somebody," he said.

Nobody's happy about it, but it's a necessary sacrifice, he said.

"It is the first year in my entire life that I am not getting together with my family, and that really sucks," he said. "But you know, that's just the way it is...that's the right thing to do."

LEGAULT SAYS FAMILY IS 'HEART OF OUR NATION'

To explain why Quebec isn't discouraging family gatherings more strictly, Legault said he believes people have a desire to reconnect with relatives this year more than most.

"I've got the [good luck] to have a wife and two sons, and I want to see them," he said. "I'm lucky enough to have my mother -- she's 91 years old. I don't know how many Christmases we have left with her."

He also mentioned his two sisters. "I need to see them," he said.

This year, he said, "we're in a fight" that will last a few more months.

"We need to recharge our batteries, and a good way to do this is to gather with our families," he said.

"Christmas, the holidays, is a time of year that's precious, and let's remember that family is the basis of our lives."

At the press conference, reporters pointed out that one of the eight days of the Jewish holiday of Hanukkah falls within the first self-isolation week, noting that special rules were not created around the major Jewish holidays in September.

When asked why the four Christmas days were chosen to relax COVID-19 rules province-wide -- especially given that the CAQ government has strongly insisted, through controversial legislation, that secularism is key to Quebec -- Legault had a brief answer.

Later, when asked if Jewish Quebecers could take the same approach, but earlier -- self-isolating for a week before seeing family at their own holiday in mid-December -- Arruda said everyone must be in lockstep.

"We say no, because we have to concentrate those meetings within the same four days," he said.

"It's very important that we set four days and that the week before, and the week after, as many people as possible within Quebec be confined."

Arruda added that the province did consider various options, including trying to find a way to have a split holiday with two days earlier and two days later, but discarded those ideas as unworkable, epidemiologically speaking.

In a statement Thursday evening, one Quebec Jewish organization also pointed out the discrepancy.

“We appreciate the government’s efforts to balance the imperatives of communal health and family holiday celebrations," Rabbi Reuben Poupko, the co-chair of the Centre for Israel and Jewish Affairs Quebec (CIJA), said.

"We hope and anticipate that the liberties granted to the Christian community will be shared equitably with the other faith communities of Quebec." 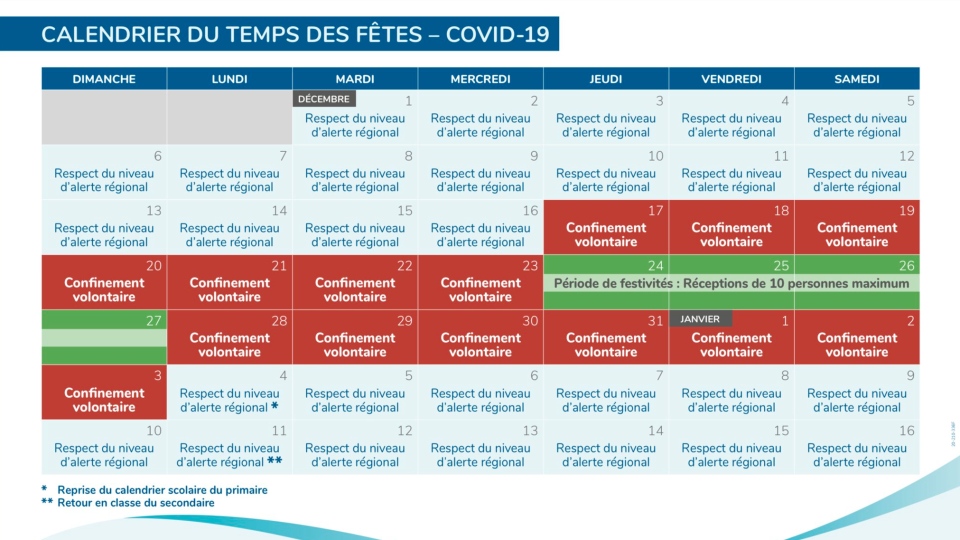