Firefighters from several municipalities were called to the scene of a large fire Friday at the Mont-Gabriel Hotel in Sainte-Adele, Que.

Officials told CTV News the fire began at around 10:15 a.m., though the cause of the blaze is not yet clear.

"At around noon, we thought the fire was under control, but it continued to spread through the walls and floors," wrote Sainte-Adele Mayor Michèle Lalonde on social media. "We are trying to preserve the main section."

"It is a general alert, firefighters from about twenty municipalities and cities are involved," she added.

By late afternoon, large portions of the structure had been destroyed while plumes of smoke rose high above what remained of the hotel. 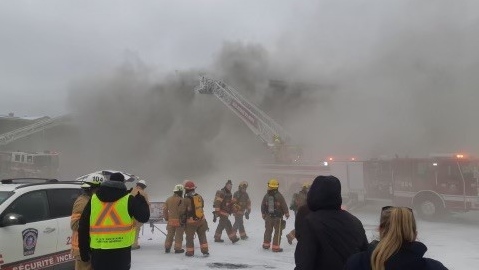 A large plume of smoke hangs over the Mont-Gabriel Hotel in Sainte-Adele, Que. Friday. Firefighters from several municipalities were called to the scene to fight the blaze.

'I THINK OF MY COLLEAGUES, JUST BEFORE CHRISTMAS'

Sainte-Adele is a small municipality located about 60 kilometres north of Montreal.

Mont-Gabriel advertises 136 available rooms at its hotel. A promotional video on its website shows large interiors with prominent wood finishing and exposed ceiling beams, which are also made of wood.

"It was a vintage hotel, all made out of logs," said Nathalie Leblanc, who works in the dining hall.

"I’m thinking of the owner,” she said. “After COVID-19, and there was also the tornado at the beginning of the summer."

In late July, a tornado swept through the nearby town of Saint-Adolphe-d’Howard, flattening areas of forest and causing devastating damage to several properties. Leblanc told CTV the hotel was also impacted, with the high winds knocking out power to the building.

"I think of my colleagues, just before Christmas time. I think of the clients, too," she added. "Tonight, the hotel was [fully booked], tomorrow night as well. I imagine that they will all be cancelled.