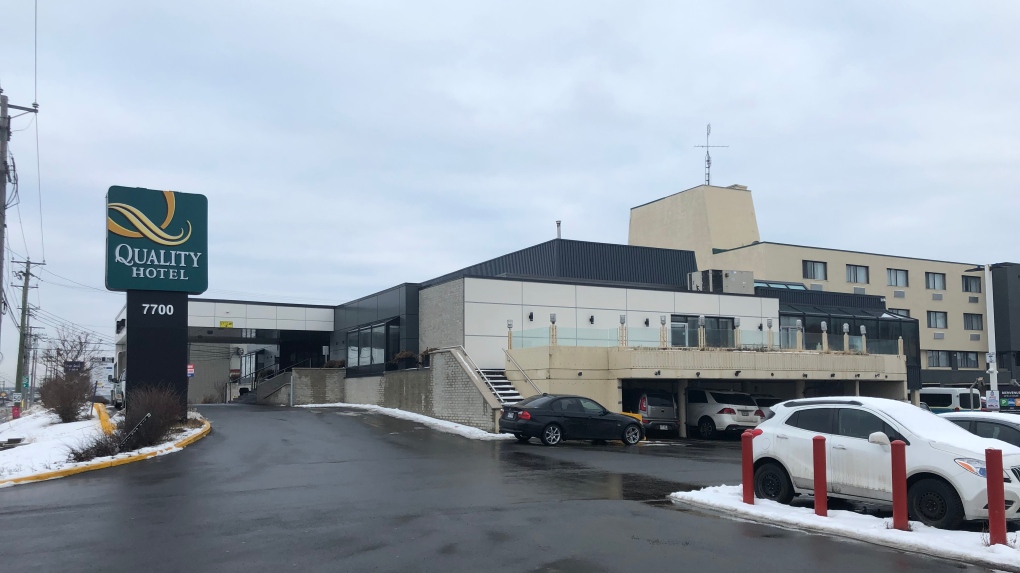 The Quality Hotel, near Trudeau airport, on Cote-de-Liesse Ave. in Dorval.

MONTREAL -- As Quebec's northern communities grapple with a mental health crisis and a lack of medical services, more northern residents have flown hundreds of kilometres south each year to receive care in Montreal. Many of those patients stay in an airport hotel not suited to house sick people, where they feel discriminated against, patients told CTV News.

In 2016, the government financed the construction of a health centre and boarding home, Ullivik, to house Inuit in Montreal while they attend medical appointments or receive treatment. It isn't big enough, however, to accommodate the growing number of patients flown south, according to people who have stayed there and a government worker with knowledge of the situation.

So dozens of patients stay at the Quality Hotel, near Trudeau airport, on Cote-de-Liesse Ave. in Dorval.

CTV News spoke to seven people who stayed at the hotel: patients, their companions or family members. All said they felt they were treated differently from other patients and that their rooms were dirty or unsuitable for the sick.

The hotel has recently been renovated. Rooms are new, fresh and bright, but a section is reserved for the Inuit patients. That part of the hotel is crowded, dark and dirty according to people who have stayed there. It has not been renovated.

Fears of bed bugs at the hotel have also spread among patients, they say. Photos of bed bugs in one of the rooms have been posted to social media, and one patient said the pests got into her luggage and infested her apartment after she stayed at the Quality Hotel.

Recent inspections have shown that the hotel is free of bed bugs, according to the hotel manager, Nader Abdel Nour. He also disputed claims of discrimination. Hotel workers enjoy caring for the Inuit patients and housekeeping staff clean their rooms every day, as they do with all other hotel rooms, he said.

Much of the hotel has been renovated except for the rooms reserved for Inuit patients, he admitted, but only because those rooms have such a high turnover rate that they are always occupied, leaving no convenient time for renovations, he said.

Plans are being drawn up for renovations of the rooms used by the Inuit patients, Nour said. Those plans include hardwood floors, which will make them easier to clean, he added.

On a Friday in November, CTV visited the hotel. New rooms were clean and bright, and the rooms used by the Inuit patients were dark, and one such room had stains on the walls and on the carpet.

Many Inuit patients and their companions dread staying at the hotel. They fear unclean rooms and bed bugs.

Also, their complaints are not taken seriously, according to Ealasie Simigak, who lives in Kujuuaq but has stayed at the hotel while attending medical appointments in Montreal.

The hotel accommodations are inadequate, particularly for patients with serious conditions, she said.

"We have to leave our families back home because of medical appointments here, and sometimes there are severe cases … chronic patients that cannot go back home because of their conditions, so the best way would be to make them feel at home as much as possible," she said.

Another Kujuuaq resident, Sarah Tukkiapik, said bed bugs had infested her apartment three times, forcing her to throw out sheets, clothing and furniture. Previously she had contracted the pests after a stay at Ullivik, she said. (That shelter now treats patients’ luggage in an attempt to reduce the likelihood of spreading bed bugs, according to people who have stayed there.)

Recently, signs of the bugs appeared soon after she accompanied patients to Montreal, where she had stayed at the Quality Hotel.

She won't go back to the hotel, she said. She is afraid of bed bugs and slept with the lights on during a recent visit because she feared being bit (she had heard that doing so would prevent bites). When she returned home, her granddaughter slept over at her apartment and woke up covered in bites. Bed bugs must have crawled into her luggage during her stay, Tukkiapik said.

She is not the only one.

Cecilia Kutchaka recently visited her mother in the hotel and noticed bed bugs in her room. She took pictures and posted them online. Her post was shared 87 times, and several people said in comments that they had seen the pests themselves, either at the Quality Hotel or at Ullivik. Many commenters also said they had never seen bedbugs at the Quality Hotel.

Kutchaka reported the sighting to the front desk. An exterminator inspected the hotel after her complaint, according to Nour, but didn't find any living bed bugs. Traces of the insects did turn up in one room (not the room where Kutchaka said she saw them).

Tensions between staff, security and patients

Patients are not allowed alcohol at the Quality Hotel, as is the case at Ullivik. At the hotel, a private security firm watches over the patients. The security guards check the patients’ bags, ostensibly for alcohol, but the checks bothered many of the patients CTV spoke with, who felt their privacy was being invaded.

Tensions also exist between some hotel staff members and the patients, according to Qarsauq Kajjat, who lives in Inukjuak and has stayed at the hotel multiple times while in Montreal to see doctors. (Kajjat prefers the gender neutral pronoun "they.")

On a recent visit to the hotel, Kajjat said they got into a confrontation with one of the staff members, who snapped at them for holding open an elevator door—something that wouldn't have happened had Kajjat not been Inuit, they said.

"They assume right away that every Inuit is a drunk, a druggie, and will cause trouble," Kajjat said. "When in actuality half the problems that are caused are due to miscommunication and the instant assumption that we are there just to drink and not what we're sent there to do, which is to go to the hospital."

Such treatment wasn't necessarily specific to the hotel — it was pervasive in Montreal and other southern Quebec cities, Kajjat added.

Nour acknowledged clashes between patients and staff but stressed that such incidents were rare.

The hotel earns over $1 million per year providing rooms for the Inuit patients, Nour said. It's a valuable contract, and he stressed that he considered his guests' satisfaction — including the patients — vital.

Hotel 'not the best place' for patients

The government agency that oversees the health network in Nunavik admitted that the hotel is not the best place for patients.

Fabien Pernet, assistant to the executive director of the Nunavik Regional Board of Health and Social Services (NRBHSS), said most patients would prefer to stay at Ullivik, which is more suitable for them.

But Ullivik has had problems of its own. In 2017, the Nunatsiaq News, an outlet that covers Quebec's northern communities, reported on numerous cases of violence and sexual violence at Ullivik. That same year, a truck struck one Inuk woman, killing her, in the Ullivik parking lot, after she was turned away from the shelter because she was inebriated.

Rather than flying patients south, building more shelters or renting hotel rooms for them, access to healthcare in Nunavik should be improved, Pernet argued.

Nunavik is almost 550,000 square kilometres. It covers the northern third of the province of Quebec. Fourteen villages are spread along its vast northern shore.

The region has two health centres, and only a few dozen hospital beds. Health resources are scant and insufficient to provide patients with anything more than basic checkups and care. Patients who need to see a specialist, or receive any more serious care, must fly south.

A mental health crisis in the region has also contributed to a spike in the number of suicide attempts in the North, adding to the number of patients being airlifted south — which doubled in 2018, Pernet said. The average life expectancy in Nunavik is almost 20 years lower than the rest of Quebec, he added.

As a consequence, Ullivik is virtually always full, and the rooms on the first floor of the Quality Hotel — the section used by the Inuit patients — are always full, too.

Pernet said patients' allegations of discrimination at the Quality Hotel were concerning.

"Of course, there will be discussions regarding the contract we have with the hotel (to see if it) is the perfect solution or if there should be another solution found," he said.

Improved northern healthcare would reduce the need for a trip south, he added. The NRBHSS is asking the provincial government to recognize the need for a hospital in Nunavik, and discussions are progressing, he said.

"We're working with the ministry to have this need recognized to make sure that in these next coming years, we will be able to start the construction of such a regional hospital," he said.

"Having those services available in Nunavik, having more exams available, more specialists available, that would for sure limit the amount of travel that patients from Nunavik would have to do to Montreal."