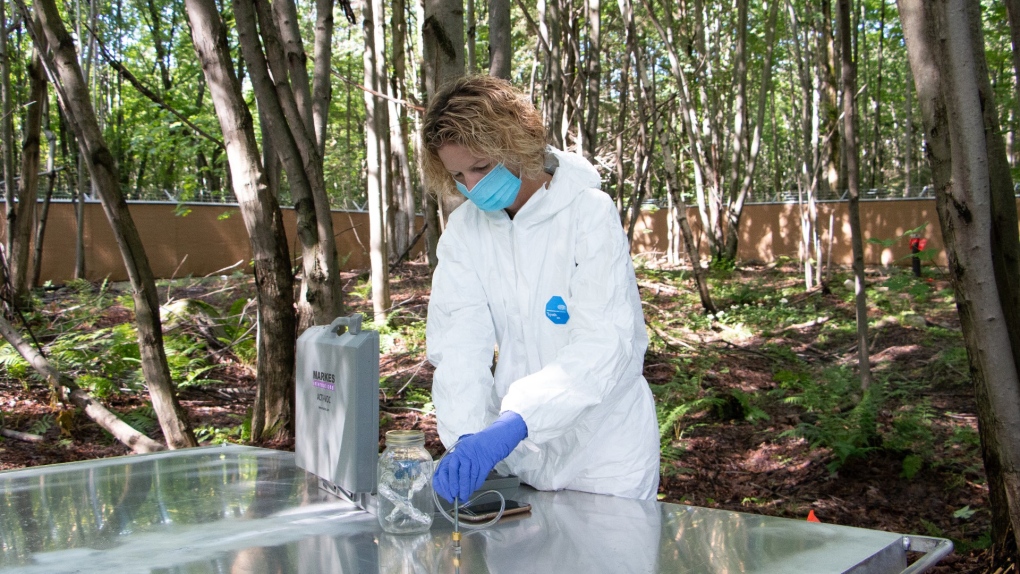 MONTREAL -- A few altruistic Quebecers—and some crime TV superfans—are on their way to helping fix a serious problem for police in northern latitudes around the world.

Their bodies have been placed since August, at their request, in a secluded wooded area near Trois-Rivières so that scientists can study their decomposition.

“As soon as a donor arrives, we start collecting data, within minutes,” said the facility’s director, Dr. Shari Forbes, and then for “weeks, months, years and hopefully decades.”

The goal is to be able to improve scientists’ ability to determine time of death of human remains left outdoors in Quebec weather, as well as honing the ability to search for and identify them.

Human decomposition has been studied for decades, Forbes told CTV News. But the lion’s share of that research has been done in the U.S.—there are nine such facilities in the U.S., some dating back 30 years, and only three outside of it, including this brand-new one.

That which means the data used for years by Canadian police, as well as Norwegian, Swedish and other Nordic police, can be off the mark.

How different is the decomposition process in the U.S.? “Most of the facilities in the U.S. are in very different climates to us,” Forbes said.

Data from Texas, for example, shows the effect of hot, dry weather. But Quebec has two extremes, with “very hot but humid summers and extremely cold... winters,” said Forbes. A press release for the new facility noted that Quebec routinely reaches both 40 below and 40 above within a single year.

How bodies decompose under those climactic swings is a relative mystery, as well as the effect of extreme cold.

Without the right data, estimates can be way off, Forbes said. If it’s been one year since death, for instance, a time-of-death estimate could wrongly put the death five years ago.

One new facility opened in northern Michigan about three years ago, providing the closest Canadian stand-in so far, and it will likely collaborate closely with Quebec’s.

Forbes herself, who is a Canada 150 Research Chair, was recruited from her native Australia to the Université du Québec at Trois-Rivières to begin this project—the university is the only one in Quebec with a forensics program.

The Trois-Rivières one is called “Research in Experimental and Social Thanatology,” giving it the acronym REST.

It’s actually across the St. Lawrence, near the town of Becancourt on a piece of land donated by Becancourt’s industrial park. The total area is 1,600 square metres, or a little bigger than an Olympic-size swimming pool.

Since it launched in the spring, it’s been using pig carcasses, “which are considered analogues for human remains,” Forbes said. It only “welcomed its first human donors” late this summer, according to the press release.

The bodies tend to arrive 24 to 48 hours after death and have all been placed on the ground in the open air, though Forbes and her team plan to bury some of the future arrivals so they can study the various effects.

The facility is fenced in and the bodies also protected by cages. It’s closely monitored, said the university, to ensure the integrity of the research and respect for the donors.

Who are the donors, exactly? There are five of them so far, and they all specifically picked the REST facility as the place to donate their bodies after death, Forbes said.

“Normally our donors are the same type of people who would donate to medical schools or laboratories,” she said, for “altruistic reasons.”

However, in this case some people seem to have other motives, too, she said, including liking the idea of leaving their body in a well-protected small piece of wilderness where nothing “man-made” is introduced.

“They get to return more naturally to the earth,” she said.

“Then we have people who just love CSI—they follow the TV shows and read the novels and I guess you could say they just have a really good understanding of our work and want to contribute to that.”

SOME WILL STAY FOR DECADES

They and their families are given an option of time-limiting the study, so that the remains are cremated and returned after a certain period of time.

But some donors and families have declined, preferring instead to support the need for “long-term data,” Forbes said.

“They’re happy to stay as long as we need them,” she said. “For us that’s… extremely valuable.”

The REST staff didn’t need to publicize at all before getting the first five donors, purely through word of mouth, she said—a generous response that surprised her.

Forbes predicts the information will be in great demand. It will help improve “the methods used to search for, locate, recover and identify missing persons, and victims of homicide or mass disasters,” said the university.

Police, search and rescue teams, forensic pathologists, students and many kinds of other natural scientists will study there.

And Forbes said she expects to be hearing from police in snowy, sub-zero areas for years to come.

“We do anticipate that they'll be asking us to assist in the future.”