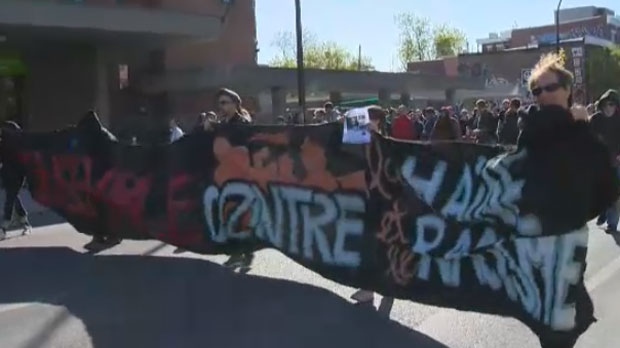 Hundreds of people protested racism and fascism in Rosemont on Sat., May 12, 2018.

Hundreds of people marched against racism and fascism in Rosemont on Saturday, with the demonstration ended at an address allegedly belonging to a prominent neo-Nazi recruiter.

Earlier this month, a Montreal Gazette investigation revealed that a man who goes by the online name Zeiger is a Montreal resident. Leaked messages from a private, encrypted chat room showed Zeiger trying to set up a series of in-person meetings in Montreal bars and apartments.

The march comes a week after another protest that went to a Park Extension condo development. On May 1, a man was photographed on top of that building, waving a swastika flag.

Montreal police have opened investigations into both Zeiger and the Park Ex incident, but no charges have been filed.

Also on Saturday, posters outing other alleged Nazis were seen in other parts of Montreal.

In NDG, posters taped to light poles identified Shawn Beauvais-MacDonald and alleged he was a neo-Nazi that lived in the area.

One man was spotted later in the day going along Sherbrooke St. and tearing down the posters.

Beauvais-MacDonald was a former member of Quebec nationalist group La Meute but was suspended after participating in the infamous Unite the Right rally in Charlottesville, VA.

Two participants in that protest, Jacob Goodwin and Alex Ramos, are charged with felony charges of malicious wounding after a group assaulted a black man in a parking garage.

Once police ordered the white nationalist protest march to stop, one participant drove his car into a crowd of counter-protesters and killed one woman. James Alex Fields Jr. is scheduled to go on trial for first-degree murder in November 2018.