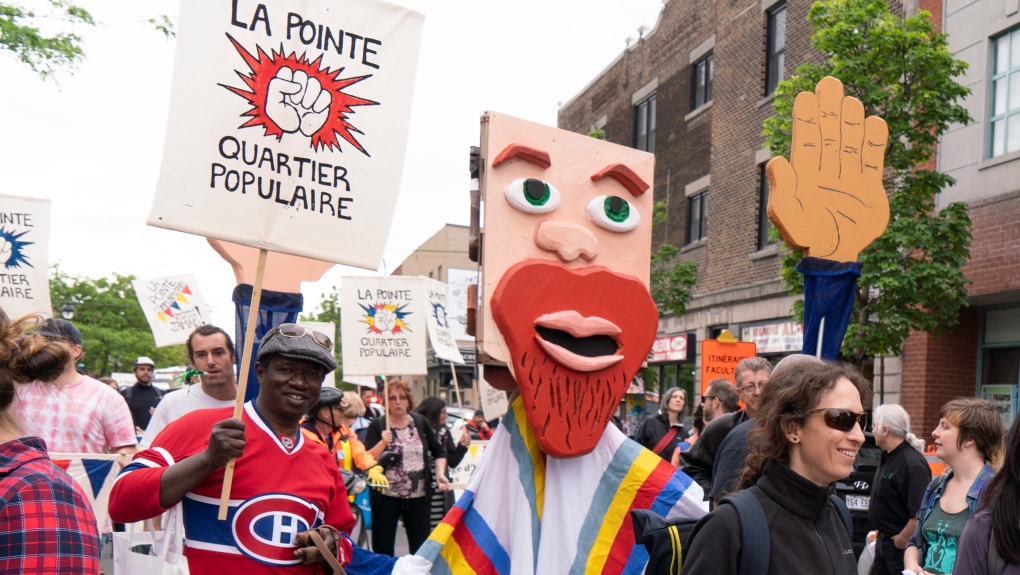 MONTREAL -- The Pointe-St-Charles neighbourhood is isolated from the rest of Montreal by the Lachine Canal and the railroad, meaning that for years it was the kind of place that many people, even other Montrealers, never visited.

But despite its relative obscurity, the working-class neighbourhood south of downtown has a history of community activism that has reverberated far beyond its borders, influencing how Quebec manages health care, housing and legal aid.

On Thursday, a three-piece band and a bicycle festooned with streamers led several dozen residents on a festive parade through the neighbourhood to celebrate 15 of the area's community organizations that are celebrating significant anniversaries on or around this year.

These included the Community Legal Services of Pointe-St-Charles and Little Burgundy, among the first legal aid clinics in the province, as well as the community medical clinic, which was the inspiration for the province's network of community health clinics, known as CLSCs.

More than 50 years later, after resisting several attempts to integrate it into the CLSC system, the community clinic remains independently managed by a board of locals, allowing it to vocally lobby for what it sees as issues of social justice, such as better dental coverage and the abolition of medical fees.

"Pointe-St-Charles has been a point of inspiration both within Quebec and beyond, even across Canada," when it comes to community activism, said Steven High, a Concordia University historian and neighbourhood resident.

While there have been organizations working in the community for over 100 years, many of the groups formed in the 1960s and '70s, when de-industrialization and the decline of the Lachine Canal caused factory closures and mass layoffs in the community.

What followed was what High calls a gradual "hollowing out" of the neighbourhood, characterized by the closure of schools, churches and stores, the neglect of rental housing, and the exodus of the population, which dropped in half between 1961 and 1991.

But at the same time, the collective suffering led to solidarity.

Groups, led by a combination of students from nearby universities and working-class residents, began forming to provide meals, clothes, health care and housing to the impoverished families who remained.

In the early 1970s, residents banded together to block the city's plan to run a major urban boulevard through the heart of the neighbourhood, which would have cut through a park and destroyed an old fire station.

A succession of housing activists have ensured that the neighbourhood, to this day, has one of the highest concentrations of social and co-operative housing in Canada.

And in what is perhaps the community's biggest David versus Goliath moment, the community sprang to action when Loto-Quebec announced its intention to build a $1-billion casino complex in 2005, holding non-stop protests and action until the plan was eventually cancelled.

High said it's unclear what caused Pointe-St-Charles' activists to succeed where others have failed. But he believes the community's relative isolation and shared circumstances led to strong mobilization.

"The people who were left were sort of in the same boat," he said.

Cynthia Hammond, a Concordia University history professor, says what's remarkable is that many of those leading the charge, especially in the early days, were poor single mothers.

"A lot of the people who were doing this work around literacy, food access, medical access didn't have high school diplomas. Many of them were single mothers," she said.

"And I think that's an important legacy, not just for Montreal but for Canada."

Today, the neighbourhood is changing. A dozen or so years after the casino project was blocked, activists say they are facing a new double threat: gentrification and baseball.

The emergence of the Lachine Canal as a tourist attraction and the transformation of next-door Griffintown into a trendy neighbourhood of highrises has brought new interest in Point-St-Charles, where new condos are popping up and formerly neglected row houses are being bought and renovated into luxury spaces.

"There's a housing crisis, not enough social housing and community housing, and lower income people are often pushed out of the central neighbourhoods because they can't pay (what landlords are asking)," said Charles-Etienne Filion, a community organizer for Action-Gardien, a community group that organized Thursday's parade.

Recently, a group of businesspeople who want to bring Major League Baseball back to Montreal also confirmed their intention to locate their future stadium on the eastern edge of Pointe-St-Charles. Action-Gardien fears that the project, which will likely include upscale condos, hotels and shops, will further marginalize and push out the long-time residents.

Action-Gardien, a liaison between the community's different activist groups, has not yet unveiled its strategy to fight the baseball stadium. But Karine Triollet, a spokeswoman, said the plan will include an alternative proposal featuring "100 per cent" community-accessible housing, services, local jobs, and access to the river.

Filion says that as the community's socio-economic status rises, its activists are as necessary as ever. The arrival of waves of young professionals buying condos along the canal has not lessened the needs of low-income residents.

"Whether it's Action-Gardien or the other groups, the goal is to give people better chances, to life up the collective status of the community," he said.

"But it has to be all together, not a block here and there."