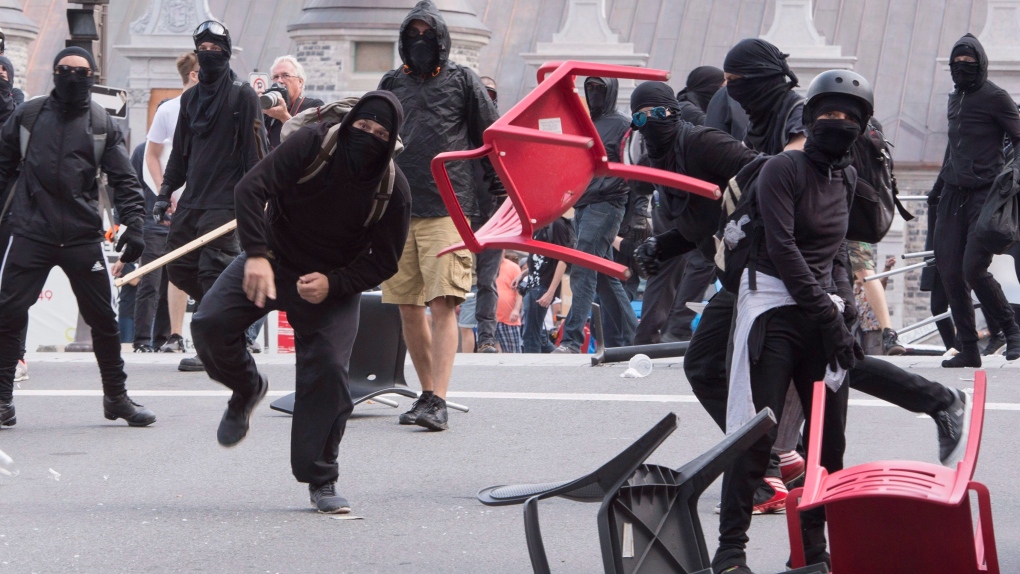 A Black Bloc protester throws a chair during an anti-racism demonstration, in Quebec City on Sunday, August 20, 2017. (THE CANADIAN PRESS/Jacques Boissinot)

Such were the chaotic scenes during the G20 summit in Hamburg, Germany this July. Amid the looting, clashes with police and general frenzy, slogans were also emblazoned on walls offering "Free hugs for Black Blocs."

What are the Black Blocs? And why are they associated with the G20 violence?

The Black Bloc is an anti-establishment protest tactic featuring demonstrators dressed entirely in black and concealing their identities.

Black Blocs are often demonized by the media and held as solely responsible for the chaos at major summits, even though many of the rioters lack the traditional Black Bloc garb.

After the G20, Der Spiegel published an article condemning "black-masked rioters" whose "sole purpose was to sow violence," comparing them unfavourably with people conducting "real political protest" which it argued was now "more important than ever."

That's similar to the condemnation of the so-called anti-globalist movements.

Embodying "new anarchy" principles, Black Blocs operate without hierarchy. They are temporary groups formed for a specific protest. Black Blocs do not exist before and after a given event.

The tactic of forming Black Blocs first appeared around 1980 in West Germany. It arose from the counter-culture movement in which people lived in squats, trying to emancipate themselves from the dual influence of government and capitalism. These "Autonomen" (autonomous people) marched against nuclear power and neo-Nazis.

They formed Black Blocs during demonstrations in order to ward off the threat of eviction from their squats, including Hamburg's notorious Hafenstra├ƒe squat. To this day, the Berlin anti-capitalist May Day protest still includes a significant Black Bloc presence.

The tactic spread through activist networks and punk music, reaching the United States and Canada in the early 1990s.

The Battle of Seattle during the 1999 World Trade Organization (WTO) Summit, which received wide media coverage, was a turning point in the dissemination of Black Bloc ideology.

Since then, the tactic has been taken up by the anti-austerity movement, the student movement (notably in France, Italy and Quebec), and such non-Western countries as Brazil and Egypt.

Yet they vary from place to place. In Germany, Black Blocs often march with banners on all sides, as protesters walk arm-in-arm. Elsewhere, individual black-clad protesters appear throughout the march or form smaller groups. Supporting groups may tag along, such as activist brass bands or street medics.

In terms of demographic makeup (class, gender, race), Black Blocs differ over time and from place to place. Black Bloc protesters might be anarchists, Communists, environmentalists, feminists, queer activists, disillusioned social democrats, students, people unemployed or holding down odd jobs. In any case, according to a Black Bloc slogan: "Who we are is less important than what we want. And we want everything, for everyone."

The Black Bloc has become a beacon for rebellion, the object of a certain revolutionary romanticism. For many, being part of a Black Bloc is proof of their radical convictions; others see it as a display of masculinity, tinged with misogyny.

Black Blocs and the media

One of the arguments used to discredit Black Blocs is that they get media attention at the expense of non-violent protest. Yet experts in the sociology of communication have observed that the peaceful protests are often overlooked by journalists, who rarely report their demands.

And so the media obsession with Black Blocs apparently benefits all the protest movements. It's also important to remember the results of a 2010 study on the media fallout of the 1999 Seattle Black Bloc: The overexposure of "anarchists" led to a substantial increase in visits to websites associated with anarchy (Indymedia, Infoshop, etc.)

In Brazil in 2013, hundreds of thousands of people visited the Facebook pages of local Black Blocs.

But for those already familiar with anarchy politics, words are unnecessary: the target is the message. Black Blocs are a byproduct of the "age of riots," characterized by a crisis of political legitimacy, austerity, and increasingly militarized police forces. In this context, riots are the language of the unheard, to use the words of Martin Luther King Jr.

Some security experts and scholars (those specializing in the Years of Lead in Italy, for example) have suggested that Black Bloc tactics are a gateway to terrorism and polemicists have conflated them with Islamic terrorism.

Yet the anarchist movement long ago renounced the idea of armed struggle, with the apparent exception of the Fire Nuclei in Greece (several members of which are currently in prison) and a clandestine network in Italy.

Furthermore, Black Bloc activists do not share Islamist values. Some even joined Kurdish forces in fighting the Islamic State.

As for Black Bloc violence, from a historical and political sociology standpoint, it is extremely limited and Black Bloc do not peddle in extreme violence used, for instance, in the 1970s by far-left groups. It has even been called "symbolic" by some academics.

Its goal is to desecrate the symbols of capitalism (the windows of banks and multinational clothing or fast food companies, to name some examples) and to defend protesters against potential police violence. Yet in some cases, some participants throw objects at police (rocks, bottles, fireworks and, on rare occasions, Molotov cocktails).

Although the issue of Black Bloc "violence" generates much heated discussion, increasing solidarity with Black Blocs is being observed within social movements.

The teachers' union in Brazil extended an invitation to Black Bloc protesters when demonstrating, as did Indigenous groups during protests against the Olympic Games on "stolen land" in Vancouver in 2010. Hundreds of people protested alongside the Black Blocs in the French demonstrations against a revised labour law in 2016.

Activists today often uphold the principle of "varied tactics," which was formally laid down in 2000 by Montreal's Convergence des luttes anticapitalistes (CLAC).

"The Black Bloc is dead," anarchists declared a decade ago in the post-9-11 era of police repression.

That was premature. The Black Bloc is still very much alive and well, and continues to spread from protest to protest and from continent to continent.