Here, there, everywhere a Lime scooter A Montreal man collects images of illegally parked Lime scooters and posts them to Flickr, as electronic bikes and scooters continue to increase in Montreal.

Having read how eScooter deployment went in France, the US and elsewhere, Montrealer Pascal Robichaud thought the same parking chaos may occur in Montreal when Lime, JUMP and Bixi e-bikes hit the streets.

Robichaud has been tracking illegally parked Lime scooters on his Flickr account, and highlighting problems associated with its app and the city's enforcement of parking violations. 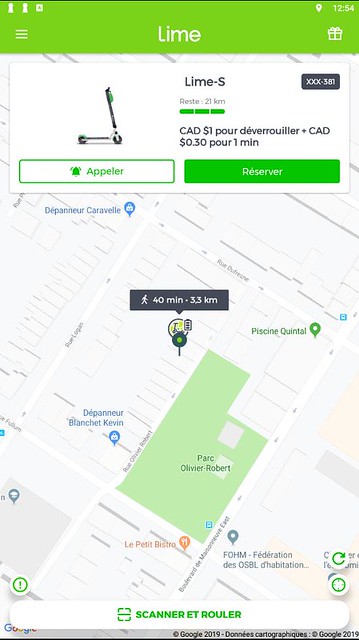 "Montreal had identified 247 parking places (the open data shows 247, even though the number I've seen in articles is a bit less) where Lime scooters have to be parked," he said. "Since the location of the Lime is shown in their app, it is then easy to see which ones are not at the specified parking spots."

Robichaud reported 29 cases of Lime scooters parked outside of proper spots to the company last Sunday. The company responded saying the GPS may be inaccurate because of the surrounding buildings.

"Your photos show some scooters parked in the wrong location, but know that GPS is imperfect, especially downtown with lots of buildings, and, as such, some Lime scooters may appear on a map to be improperly parked but are in fact parked properly," responded Mike Markevich, GM at Lime Canada.

Robichaud now only collects data from scooters parked far enough away from a parking spot to be clearly out of the proper parking zone. Still, there were between 30 to 60 violations.

He posts every violation on his Flickr account and would like to see the app colour code the map to show areas around parking spots as green, and those over 150 metres away as red, as he's done in his map.

"Right now, they have set the entire four boroughs 'parkable,'" he said.

Last week, Robichaud used the City of Montreal's 311 app to report a Lime not parked correctly and was told they do not respond to these types of complaints.

"They answered that they do not make any follow-ups on those requests and that I should contact Lime directly, but how can they give infractions if they do not make any verification following a declaration," he said. "This being said, I am well aware that the police have many other more urgent matters."

Replying to a Tweet saying the city has inspectors looking into Lime parking, Robichaud tweeted Montreal Mayor Valerie Plante asking how many inspectors there were and never received an answer.

"I feel like the city was overconfident with its 'best' regulations in the world, but not having any way to enforce it properly, it's like having no rules at all," said Robichaud. "In fact, Lime is then operating like in any other city and the users leave their Lime scooters anywhere they want."