Half of world's right whales spotted in Gulf of St. Lawrence in 2018 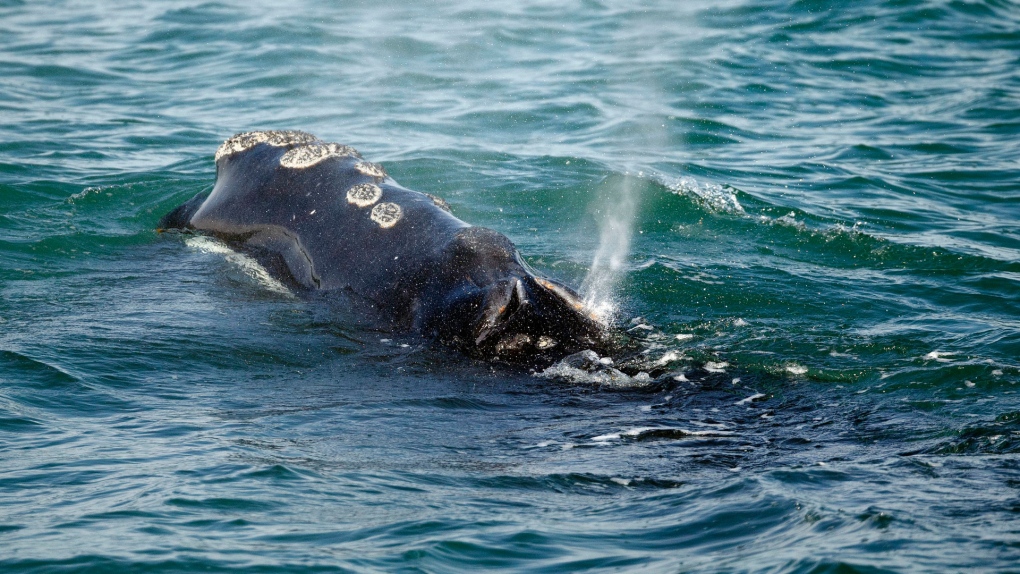 In this March 28, 2018, file photo, a North Atlantic right whale feeds on the surface of Cape Cod bay off the coast of Plymouth, Mass. A group of Democratic senators said in an April 25 letter to the National Oceanic and Atmospheric Administration that the agency should conduct a review of Canada's right whale conservation standards, and consider prohibitions on some Canadian seafood imports if they are too weak. The right whales number only about 450, with 17 deaths in 2017 and 12 of which were in Canada. (AP Photo/Michael Dwyer, File)

Nearly half of all North Atlantic right whales in the world were spotted in the southern Gulf of St. Lawrence this year during surveillance that officials say will inform future protection measures.

The federal Fisheries department and Transport Canada gave an update Tuesday on the key findings from a meeting last month on the endangered mammal.

Garry Stenson, a Fisheries research scientist, said an estimated 190 right whales are believed to have been in the southern Gulf this year, nearly half the remaining population of about 411.

In 2017, 12 North Atlantic right whales were found dead in the Gulf. Necropsies on seven of the whales found four died from trauma consistent with vessel collisions while two deaths were the result of entanglement in fishing gear.

Stenson said there is clear evidence there has been an increase in the number of right whales migrating to the Gulf starting in about 2015.

"There were whales present earlier, in fact there are some records that go back to the 1970s, but they were quite rare up until recent years," Stenson said during a teleconference with reporters.

"But in the general picture of right whale distribution in Canadian waters, what we're seeing in 2018 is the same as 2017 -- we're seeing a large concentration of whales in the southwest Gulf of St. Lawrence, fewer whales in the northern Gulf, some found elsewhere."

He said right whales can still be found in areas where they have historically been found -- including the Bay of Fundy -- but at much lower numbers.

Stenson said it's believed changes in the abundance and distribution of the whale's prey is closely related to where right whales are now being found. He noted the distribution of prey will vary from year-to-year.

"But those same general hot spots show up on a fairly regular basis ... which right now is the southern Gulf of St. Lawrence," said Stenson.

The information from the peer-review meeting will be used to inform management measures for 2019.

The 2017 deaths prompted Ottawa to implement a number of measures.

A mandatory slow-down zone was implemented in August 2017 that lasted until January 2018. Later in 2018, speed restrictions were imposed in the western Gulf.

Stenson said a simulation study presented at the meeting looked at the location of crab fishing gear and where whales might have encountered it over a three-year period.

"What we found is that there's a lot of fishing gear in the southwest Gulf, there's potential of interaction between that gear and the whales," said Stenson, noting that an interaction is not the same as an entrapment.

"One thing we did notice was that when you looked over the three years where the whales and gear may have encountered each other, the vast majority of this was covered by the... fishery closure zone in 2018."

Stenson said a science report will eventually be released about the peer-review meeting, and Tuesday's update merely provided the key highlights.

He says a follow-up meeting will be held in January to formulate recommendations for research plans in 2019.