Habs Fever: Too many question marks 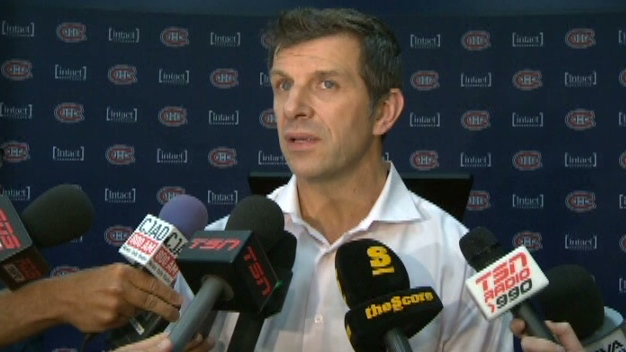 After four months of hockey reporters sounding like lawyers, it's time to return to the reason we joined the game in the first place.

The NHL season will soon commence and with it the excitement that puck drop brings. It's been a long road and many are justifiably bitter. It will not be easy for the league to get back to a healthy place after a third extended lockout in 18 years.

But the words written on that subject are long, and at this point tedious. It's time for that to be past, so we can bring on the excitement of the future - an excitement for Habs fans that might not be on the horizon as soon as now, but certainly in the season 2013-14.

This year will be so completely different than next year, it is going to be remarkable how many roster changes fans will see from these 48 games to the following 82 in October. The reasons for change are mostly found in amnesty buyouts and youth being served.

Which players will be bought out?

First the buyouts: it is too early to know who the Canadiens will buyout to begin putting the memory of the horrendous Pierre Gauthier behind them. Marc Bergevin will be likely choosing from three players: Scott Gomez, Tomas Kaberle, and Rene Bourque. And though on the surface it seems like an easy choice, it is not.

Scott Gomez will only have a year left on his contract when the amnesty buyout opportunity arrives. The cap hit will still be significant at over $7 million, but the salary hit is $2 million and change, so if Gomez is playing at all well, and the Habs are not pushing against the cap, then he is actually not an expensive player.

Tomas Kaberle may just be the most obvious of the buyout players. Kaberle should not be a Montreal Canadien. He was already poor in Boston when they won the cup. He was then poor in Carolina the following autumn, and somehow Gauthier must not have watched a game, or he simply can't evaluate worth a darn. Kaberle is also overweight, and lacks the courage to go into the corner. This is a quality that is going to drive Michel Therrien crazy. He can not stand a lack of courage, and I can already see a dog house with Tomas written on it in non-erasable ink.

The final player that the Habs will consider buying out is Rene Bourque. He was a complete write-off last year. Disgustingly uninterested in being in Montreal. However, he was injured and it hurt his play.... they say. Bourque back and healthy and interested is intriguing as he did score 27 goals three times in this league. His contract has another 3 years in it after this season and if he is not playing well, then the Habs will surely get rid of it. If he is playing well, then the choices become interesting again.

Whatever Bergevin chooses, Habs fans feel blessed that he has the right to choose it. It would be very hard for this club to start fresh next year and really begin a move toward a brighter future with possibly three albatrosses on their roster of 20. That's a percentage of chaff that the wheat can't grow through.

The other reason that this season feels like a stopgap toward a greatness to come is the age and development of the prospects of the club. All the good hope is very young hope. The back end D-corps need development. There is a likelihood that of the big three Jarred Tinordi, Nathan Beaulieu, and Morgan Ellis, that only Beaulieu will be able to crack a roster spot. The development of a defenceman takes time and they are definitely experiencing growing pains in Hamilton right now - Beaulieu is ahead of the others a half season into the pro game.

At forward, Brendan Gallagher is the closest to arriving. He's been a consistent competitor on an overmatched Hamilton team. Gallagher will be an excellent hockey player, but because of his size, it is an educated assumption to think that he wouldn't arrive with the so-called big boys with a faster time stamp than a taller man who strengthwise is already a step ahead, even if his skill level is only the same as Gallagher's.

The most important prospect is a man who is going to have his number on the most fan jerseys along with PK Subban and that's Alex Galchenyuk. The stars in the sky are his. He has all the skills and competes with the best in the game at every level. In the recent World Hockey Championships, essentially a tournament for 19 year olds, the 18 year old American from Wisconsin only got 13 minutes ice per game, was on the second powerplay unit, didn't get a sniff on any 5 and 3 powerplay, and still managed to be one of the best players of the gold winning USA squad. Galchenyuk is toying with the Ontario Hockey League in Sarnia. There is nothing much to do there for him anymore, but with his development so quick, if he can't make the Habs, he can't play in Hamilton, and next season almost feels like a wasted year in his development not getting challenged enough.

One should not either forget Sebastian Collberg and Charles Hudon. The former was a star again in the WJC as Sweden won the silver with him as one of the best players. His one on one breakaway arsenal is ridiculous at this age already. Collberg is another prospect who will shine here one day. As will Hudon who made the Canada squad, but was injured and sent home just before the tournament began.

In the immortal words of a smart ass kid: "What about it?"

Honestly, not much. The holes in the roster from the Gauthier days were too tough to fill by Bergevin in a single summer. The additions will add some sandpaper in Prust, Armstrong, Bouillon. The captain also returns to key perhaps a second line that can score because Plekanec having no one to play with was likely the most difficult spot for any player to be in last year, and of course, he did it without complaint. If Plekanec, Gionta, and Bourque can form an effective line, then the season has a chance.

More importantly though, if you want to look to where the Habs might finish the season, look no farther than the knee of Andrei Markov. If it is healthy, and Markov finds the form that made him one of the best rearguards in the league then all bets are off in the assessment that the Canadiens will stink again. Markov did not shine though statistically in Russia. He was a plus player, but had only a single goal in 21 games played. Truly though, it is enough that he played those games and his knee held up. That's the news that matters.

PK Subban is not a question mark. He's a restricted free agent and he will be signed. Short term. Long term. Honestly, it is not worth the worry that many have put on the subject. He's not going anywhere. Put him in the A+ column.

My feeling is the Habs will be an also-ran this season. There are simply too many question marks. Usually, when you have as many question marks as Markov, Gomez, Bourque, Kaberle, Gionta, Leblanc, Armstrong, some will come through and some won't. If just half don't, then you can't expect even a playoff spot after finishing 15th last year.

In fact, the following year provides question marks too especially on the back end. Will the big three be ready? Likely not. And the 7 question marks from the previous year don't get younger or stronger or better with time except Leblanc.

It's a long road back when your previous GM seemed hell bent on being the hockey equivalent of a tsunami.

Take heart though, the prospects are coming and they are fantastic. It's just going to take a while.

I fully expect the fans will have patience with the new GM with all of the goodwill he has already won.

For now, it's game on, and let's see what that brings: Win, lose, or draw, after the last four months, anything is better than the embarrassment that just concluded.