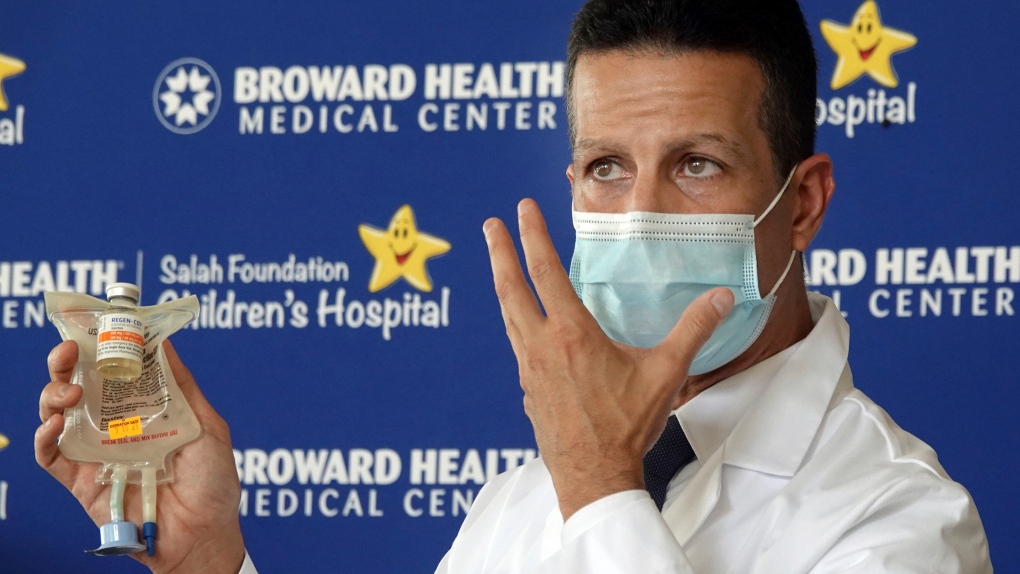 MONTREAL -- Quebec is preparing to accept delivery of a small but potentially lifesaving shipment of a COVID-19 antibody treatment, which some doctors say will be a great added disease-fighting tool - if the province’s health authorities can organize the resources needed to drip it into patients’ arms.

The limited supply of the monoclonal antibody cocktail is being divvied up amongst the provinces by Canada’s Public Health Agency.

Quebec is to receive only “a few hundred doses,” according to a health ministry directive issued on Oct. 8.

"It’s a very important treatment for a special population of people who are vulnerable to severe complications," said Dr. Emily McDonald, a scientist in the infectious disease and immunity in global health program at the RI-MUHC.

These particular COVID-19 patients "may have done their best to protect themselves from seeking out the vaccine but weren't able to respond to it," said McDonald, who is also an internal medicine doctor.

Getting fully vaccinated remains the best and least costly avenue to prevent severe disease and hospitalization.

But for those who need them, the monoclonal antibodies, part of a class of medications, mimic the immune system’s ability to fight off the virus.

Quebec will be receiving a new combination of the antibodies: Casirivimab and Imdevimab.

According to INESSS, “if the drugs are used in a very targeted and timely way, they could help prevent hospitalizations."

The monoclonal antibodies are ideal for patients who are inadequately protected either because they have a medical condition that has compromised their immune systems, had organ transplants, chemotherapy treatment, or suffer from an autoimmune disease like rheumatoid arthritis, for example.

It is most effective when administered within seven days after a positive COVID-19 test.

Efficacy depends on several factors but in ideal circumstances, McDonald said "there are some studies that show that if you treat five people you might prevent one hospitalization, so pretty effective."

Late last month the World Health Organization backed the use of the antibodies in select, high-risk patients.

In light of the fourth wave and the current fragility of the health care network, Quebec's health ministry has asked health authorities to establish at least one site in a facility on their territory where the treatment can be administered.

It’s not a simple request, given that it involves bringing an outpatient who has COVID-19 into a hospital or clinic with all the risks and complications that entails.

And they’ll have to allocate the appropriate health care worker to the task, since the treatment itself is not a basic injection, but rather, involves an hour-long intravenous infusion.

WHAT TOOK SO LONG?

Monoclonal antibodies have been used extensively to treat COVID-19 in the United States for some time, so why haven’t Quebecers benefitted yet?

It seems that at least a couple of problems stood in the way- one biological and one logistical.

While a single monoclonal antibody, Bamlanivimab, was authorized by Health Canada in 2020, the treatment didn’t get a “positive enough recommendation” from scientists at Quebec’s institute for excellence in health (INESSS),” according to the health ministry and wasn’t rolled out extensively.

And then, whatever limited usefulness it had diminished over time as the virus continued to spread around the world, and changed.

“We found that that [with] the single monoclonal antibody...some of the variants were developing a resistance to it,” McDonald said.

There was also the previously mentioned issue around identifying a treatment site for outpatients and finding nurses who would be able to work there when needed.

But though there's limited data out the new combo-drug is performing better and will soon be accessible in the province - albeit in very limited supply.

“There remains this population of people who will never respond to the vaccine or respond poorly and it's I think it's really incredible that we have this treatment to offer them,” said McDonald.