Both Quebec solidaire co-spokespersons Gabriel Nadeau-Dubois and Manon Masse were re-elected in their ridings, and QS will maintain its orange wall on the Island of Montreal.

QS, however, did not form the Official Opposition with Dominique Anglade's Liberal Party holding onto that status.

Nadeau-Dubois won in his Gouin riding, while Masse returned to represent Sainte-Marie-Saint-Jacques.

"Tonight, despite everything, Quebec solidaire resisted this [CAQ] wave, and to this I say thank you," said Nadeau-Dubois.

"I gave it everything I had, the Solidaire team gave everything it had, I am proud of us."

He said if Francois Legault's CAQ government does not take the climate crisis seriously, Nadeau-Dubois "will be his opponent."

He pointed to young Quebecers who are faced with a worsening climate crisis.

"I want to say a special thank you to the young people," said Masse. "Young people, when we take the time to listen to you. When we go to meet you and open our ears, we see that your generation is not inactive!"

QS candidates Alexandre Leduc in Hochelaga-Maisonneuve, Vincent Marissal in Rosemont, and Andres Fontecilla in Laurier-Dorian also kept their seats, as did Ruba Ghazal in Mercier in Montreal.

Haroun Bouazzi won the final piece of the orange wall in Maurice-Richard, taking it for the QS from the Liberals. 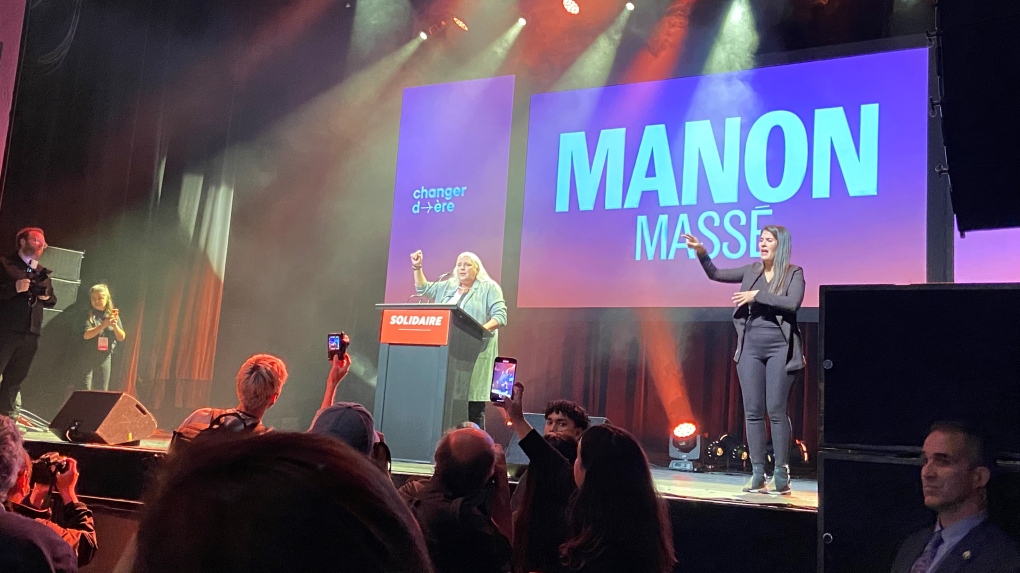 Manon Masse was re-elected on Oct. 3, 2022, but her Quebec solidaire party will not form the official Opposition. (Christine Long/CTV News)

Nadeau-Dubois campaigned hard in the Eastern Townships to keep the seat it won in 2018, and the work paid off with Christine Labrie fending off her CAQ opponent Caroline St-Hilaire in Sherbrooke.

Etienne Grandmont was also elected in the Taschereau riding in the Quebec City area. Catherine Dorion was the MNA in the riding for the QS from 2018-2022 and chose not to run again. Sol Zanetti won in the Jean-Lesage riding in the provincial capital.

However, QS incumbent Emilise Lessard-Therrien was unable to hold off CAQ candidate and former Liberal Daniel Bernard, who took the seat.