The Liberals won a total of 21 seats, most of which were in and around the island of Montreal.

The news was met with thunderous applause at the Liberal headquarters at the Corona Theatre.

"During the entire campaign, we sent a message to reunite Quebecers," said Anglade during her speech to supporters. "Whether you voted for us or for another party, our door will always be open."

While her speech was almost completely in French, she pivoted during one sentence to speak directly with her English-speaking base.

"Let me be clear: we will represent all Quebecers, from all strides."

With Anglade's victory, the PLQ team can breathe a sigh of relief after a campaign rife with uncertainty for the future of the party.

That's because several ridings traditionally considered deep-red Liberal strongholds in Montreal's west side and Laval were polling with increased support for other parties.

There are several reasons for that shift -- experts have chalked it up to displeasure with the party's performance during its last mandate. Francois Legault's Coalition Avenir Quebec (CAQ) led a divisive first mandate defined by sweeping language and secularism legislation, and members of the Liberal base expressed dissatisfaction with the Liberals, who were unable to soften it. 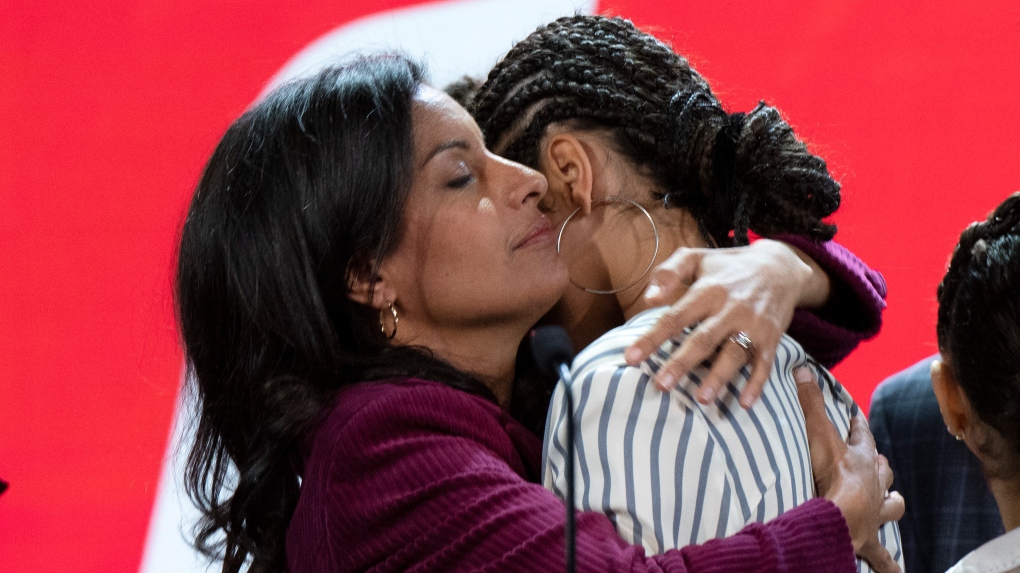 Quebec Liberal Leader Dominique Anglade hugs her daughter, Clara, after speaking to supporters after the results in the provincial election at the PLQ headquarters, in Montreal, Monday, Oct. 3, 2022. THE CANADIAN PRESS/Ryan Remiorz

Liberal Leader Dominique Anglade was at a disadvantage throughout the campaign as a relatively unknown candidate, compared to Legault. This was her first election as party leader, and support for her as a candidate waned through it, with polls at times suggesting she may lose her own seat.

What voters can expect is a considerably weaker Opposition than the Liberal Party has been in the past. The National Assembly has changed quite a bit in the last decades as the province has transitioned out of its two-party paradigm. Gone, for now, are the days of Liberal and Parti Quebecois dominance over Quebec politics -- though the new era is still taking shape.

"We're still here, we're going to rebuild stronger," said the Liberal candidate for Fabre, Monique Sauvé. She told CTV she thought Anglade led an "amazing campaign," despite the limitations posed by the pandemic.

"It was two years that people didn't have to get to know her," she said.

The party's own insiders have acknowledged the party is in need of some serious reflection if it hopes to regain prominence in provincial politics.

Over the next four years, the Liberals will try to renew its relationship with French speaking populations outside Montreal, where support for the party is weak. It will also need to strengthen its base inside Montreal, especially in the city's west.

"A lot of long-time Liberals this time did not vote," said veteran party member Carlos Leitão. "We need to continue to reach out to those folks."

"The bigger challenge is to reach out to the rest of the province," he added.