Thousands of demonstrators assembled in Montreal Saturday to protest provisions in Bill 96 and its amendments to the French-language law, Bill 101.

Protestors began gathering at 10 a.m. at Dawson College on Sherbrooke St. West and marched to Premier Francois Legault's office at the corner of Sherbrooke and McGill College.

"As it stands, Bill 96 will reduce and restrict access to education, health care, justice, and government services in English," reads a press release from organizers.

On Thursday, the Quebec legislature passed an amendment to Bill 96, easing rules slightly for the province's English-speaking college students.

Bill 96  is expected to pass this month, and would impose tougher language requirements on workplaces and municipalities.

It also seeks to limit the use of English in the courts and public services, grant powers of search and seizure without a warrant to Quebec's language regulator and cap enrolment at English junior colleges, where students would have to take more courses in French. 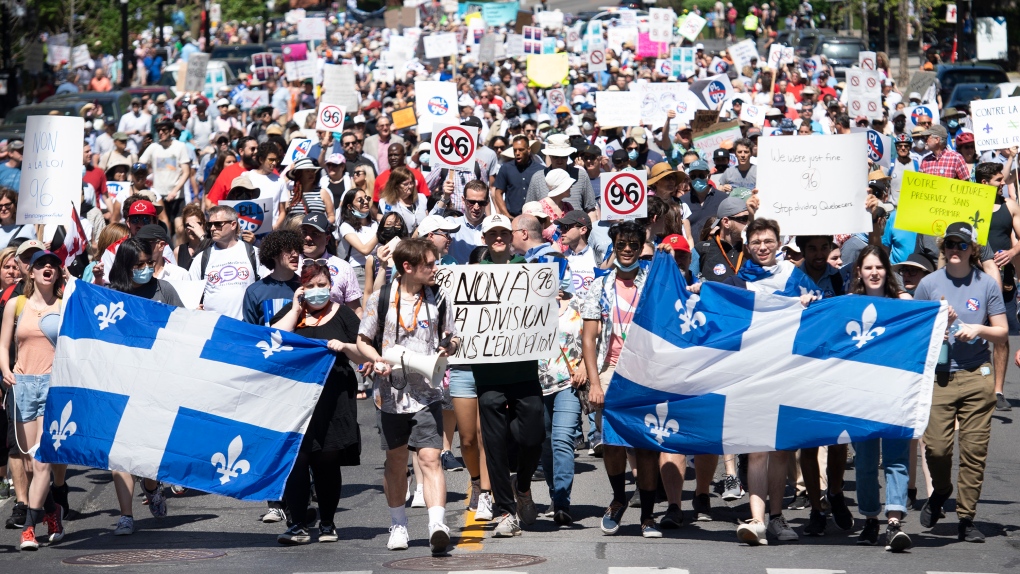 Russell Copeman, executive director of the Quebec English School Boards Association, says he supports efforts to promote and protect the French language, but describes Bill 96 as "discriminatory" and the cause of "frustration and anxiety" among anglophones and francophone business leaders.

"There's issues to access to justice, access to services in English, access to health and social services," he said. "There are lot's of reasons to oppose this bill."

Mohawk Council of Kahnawake Grand Chief Kahsennenhawe Sky-Deer said demanding that young people master a third language -- French -- carries colonial overtones and would make it harder for them to succeed.

"[It's] a heavy burden on our kids, and that's going to discourage them and make it harder for our people to get into professions," she said. 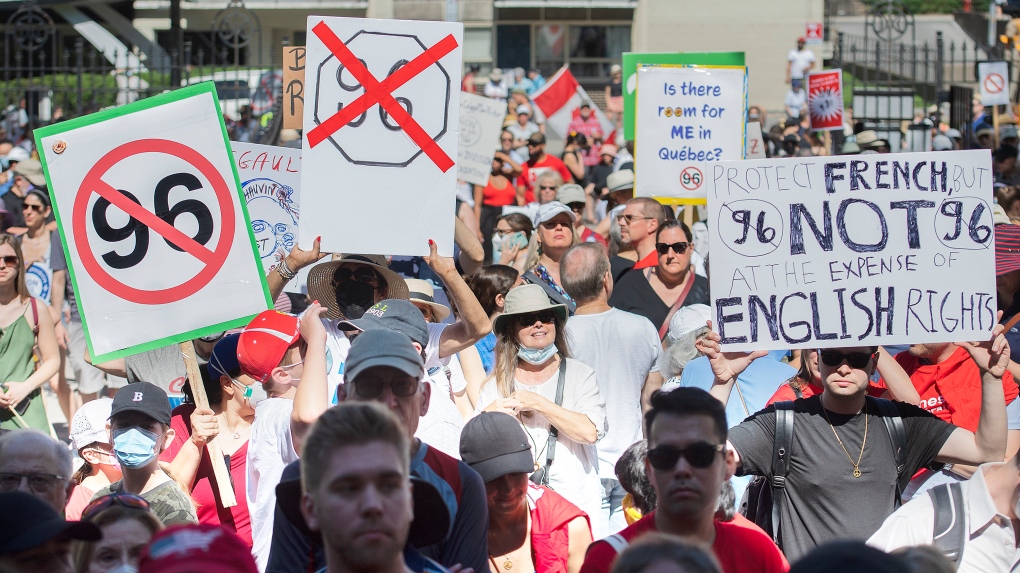 Politicians from both the federal and provincial Liberal parties marched alongside demonstrators, including Quebec Liberal (QLP) leader Dominique Anglade.

"We really believe that the French language can be promoted and protected, but in a way that is inclusive," Anglade said. "That is not what Bill 96 is doing."

But the Quebec Liberals have a complicated history when it comes to Bill 96: it was they who initially suggested students at English CEGEPS be required to take three core courses in French.

Following the outcry of English-language CEGEPs, Anglade would later offer a "mea culpa" for the proposed amendment, admitting the party should have consulted with them beforehand.

With this in mind, the head of the new Canadian Party of Quebec, Collin Standish, said English-speaking Quebecers have been let down by the Liberals.

"The Liberal party of Quebec and Mme. Anglade should not be present at this rally. The've made it worse," he said.

LISTEN ON CJAD 800 RADIO: Tom Mulcair: How does the francophone media cover Bill 96?

Not everyone in attendance was against the bill, however: a small group of counter-demonstrators also made an appearance Saturday, playing French-language music and waving the Fleurdelisé flag.

Counter-demonstrator Éden Bélanger said he came to the protest to show pride in the French language.

In his view, the ends of Bill 96 justify the means.

"We have a social objective, and that's to protect French," he said, adding that he personally believes Indigenous groups should be exempt from the bill.

He said their goal isn't to eliminate English, but to ensure French is the predominant language in Quebec society.