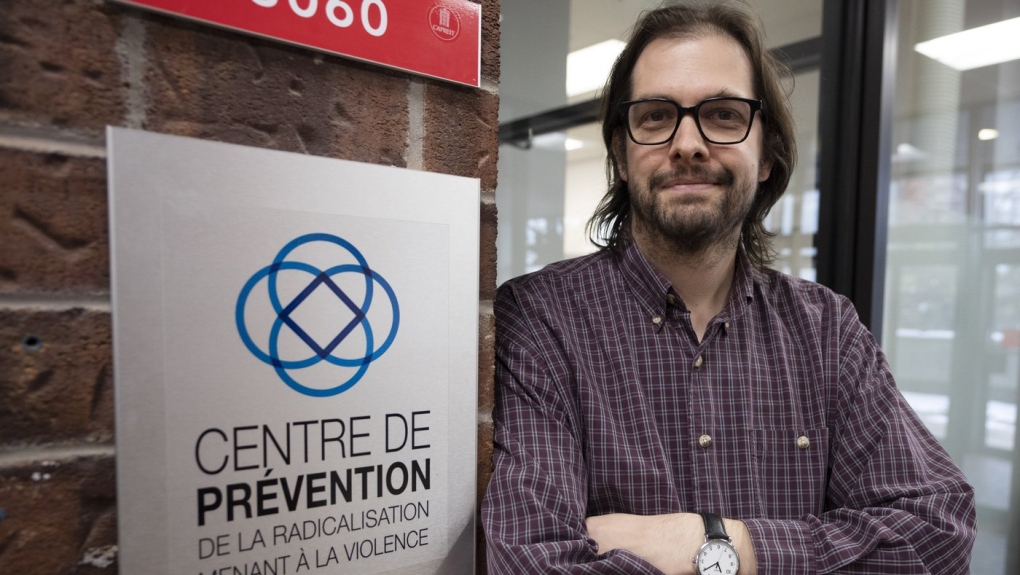 Louis Audet Gosselin, scientific and strategic director for the Centre for the Prevention of Radicalization Leading to Violence, is seen at the centre’s office, Monday, November 21, 2022 in Montreal.THE CANADIAN PRESS/Ryan Remiorz

To reach its current office, visitors have to navigate the corridors of the concrete pyramid that is the city's former Olympic Village, past pizza and sushi shops, other offices and a grocery store.

The new venue is one of many changes that the Centre for the Prevention of Radicalization Leading to Violence has undergone since it opened in 2015 to great fanfare. Its creation came as a wave of young Quebecers was leaving to join the Islamic State terror group in Syria and after attacks in Ottawa and St-Jean-sur-Richelieu, Que., that were inspired by the terror group.

After a period of organizational turbulence, the centre has continued its work, with a lower profile, a smaller budget, and a focus that has increasingly shifted from radical Islam to the far right and conspiracy theorists.

Louis Audet Gosselin, the centre's scientific and strategic director, said that while the fear of young people leaving for Syria was the "spark" that convinced authorities to fund the centre, the institution very quickly made it clear that its scope wasn't limited to one threat.

"Pretty soon, the centre found it really important to communicate that radicalization was something way beyond that specific moment, and that specific ideology of jihadism, or a form of political Islam," he said.

"Every type of ideology, of social or political idea, can have a radical and an extremist trend and can lead to radicalization."

Audet Gosselin said the COVID-19 pandemic "democratized" the notion of radicalization by making people realize that it could happen to someone of any age or background. Calls to the centre in 2020 -- the first year of the pandemic -- doubled from the previous year. The centre's annual report credited the spike to "a fraying of the social fabric" that led to violent acts, conspiracy theories and polarized debate.

While demand for its services remains high, the centre is carrying on its work with little of its initial visibility after a turbulent period that left its survival in question. In March 2019, the city abruptly announced that the centre's then-director had been removed from his post. Most of the board of directors also resigned.

While the city has refused to publicize the report that led to the change of management, Audet Gosselin -- who was not employed by the centre at the time and says he has not seen the report -- believes the issue was largely financial, related to overspending on things not directly related to the centre's mandate, as well as a difference in vision from newly elected provincial and municipal administrations.

In the end, both the provincial and municipal government decided to continue to fund the centre -- but with a narrowed focus on Quebec and a reduced budget of $1.3 million in 2021, down from around $2 million at its peak.

Today, the centre's 15-member team includes researchers, people who conduct online training for schools and community groups, and support team members who take calls from people concerned about friends or family who they think are becoming radicalized.

Amarnath Amarasingam, a professor of religion at Queen's University, says most of the network of organizations dealing with radicalization in Canada sprung up to deal with the "foreign fighter" phenomenon. But concern about the far right has been growing quickly, he said, following the election of Donald Trump in the United States as well as the 2017 Quebec City mosque shooting, during which a white gunman killed six Muslim men.

"I think there was some critique overall that this entire kind of apparatus was built with minority communities in focus and that there was a blind spot when it came to these far-right movements -- which is starting to change," Amarasingam said in a phone interview.

He praised Montreal's centre as a useful resource, noting that it has had success in getting into schools, which can be difficult due to a reluctance on the part of teachers and educators to discuss extremism with young people.

Both Amarasingam and Audet Gosselin say the process of helping someone who is going down the path of radicalization is similar, regardless of what ideology they are attracted to.

Audet Gosselin says that while each radicalized individual is different, many of the root causes of their extremism are the same: a feeling of being marginalized, excluded or deprived, as well as a distrust of democratic institutions.

Currently, Audet Gosselin says he's worried by what he calls the "anti-government and anti-authority trend" that has risen in Canada throughout the pandemic. While it's inspired by the far right, it's less organized, and it's tied to general distrust of institutions, he said.

While this movement hasn't resulted in "big acts of violence" yet, he said, the rhetoric can be violent and include calls for mass executions or violence against journalists, politicians or doctors.

He said he also feels that Canadian authorities aren't concerned enough about rising threats to the LGBTQ community, which have led to violence in the United States with the fatal shooting at an LGBTQ nightclub in Colorado Springs.

When working with potentially radicalized people one on one, the centre tries to address the person's needs, whether that means connecting them with a mentor, a therapist or a job. Because radicalized individuals are often isolated, it also means helping them build healthy social connections and ways of expression, he said.

In response to the rise in conspiracy theories, the centre put together webinars, training and a discussion forum for families.

But Audet Gosselin said that just because public attention has shifted to new forms of radicalization, doesn't mean the others have disappeared.

"We have this idea that 2015 and 2016 were more jihadism, 2017 and 2018 were the far right and then 2020 and 2021 were conspiracy theories," he said. "But the jihadists are not gone, the far right is still there, and we still have calls for every one of these broad ideological families."

This report by The Canadian Press was first published Nov. 29, 2022.