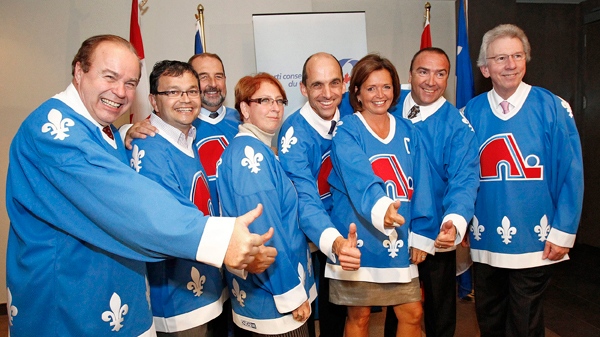 Quebec Conservative MPs wear Quebec Nordique jerseys during a caucus meeting in Quebec City on Wednesday, Sept. 8, 2010. The MPs wore the jerseys to support the construction of a new arena. A march will be held Oct. 2, 2010 in support for the return of the Nordiques. THE CANADIAN PRESS/Le Soleil-Yan Doublet

QUEBEC -- Ex-media baron Pierre Karl Peladeau may want to create a sovereign Quebec but a former Canadian prime minister is battling to get the province its second NHL team.

Brian Mulroney has emerged as a key player to bring the Quebec Nordiques back to the provincial capital, a project that was previously closely linked to Peladeau.

Quebec City Mayor Regis Labeaume spoke of Mulroney's involvement on Monday as he reacted to news that Peladeau, former head of Quebecor Inc., is running for the Parti Quebecois in the April 7 election.

Labeaume insisted that Peladeau's involvement in politics would have no effect on any return of the Nordiques, who began as a World Hockey Association team in 1972 before switching to the National Hockey League in 1979.

The team moved to Denver in 1995 and was renamed the Colorado Avalanche.

Peladeau has been one of the key movers to bring an NHL team to the provincial capital. His Quebecor Inc. purchased the naming and management rights to a new arena where a team would be based.

The estimated $400-million cost of the facility is split 50-50 between the province and Quebec City -- a deal that was supported by the PQ before the 2012 provincial election.

Peladeau announced Sunday he would run for the PQ in Saint-Jerome riding, proclaiming he wants to help make Quebec independent.

"We've got everything (we need) for a country to be alive and kicking," he told an enthusiastic crowd.

Labeaume praised Peladeau's jump to the political arena but didn't offer an endorsement.

"I think it's excellent news for democracy when people like Pierre Karl Peladeau get involved in politics," Labeaume told a news conference on Monday.

He then described the quality of the candidates for all parties as "magnificent."

Labeaume agreed that Peladeau had epitomized the hockey team project.

"But he was supported by a team of a very high calibre."

Mulroney, who is vice-chairman of the Quebecor board, has been involved in the hockey file right from the beginning and he and NHL commissioner Gary Bettman share a mutual respect, Labeaume said.

"Commissioner Bettman and (ex-)prime minister Mulroney have spoken directly for quite some time, without intermediaries," Labeaume said.

The mayor said the eventual decision on whether Quebec City will get an NHL team will depend not on politics but on the benefits it provides the league.

He pointed out the NHL's main objective is to "make profits."

"It doesn't operate on emotions."

He dismissed any hurdles posed by a possible sovereignty referendum or Quebec independence.

"Mr. Bettman is a businessman," he said. "The Quebec sovereignty project will not bother him."

He added that if Quebec became independent tomorrow, the NHL would still go ahead and re-sign its deal with the Montreal Canadiens.