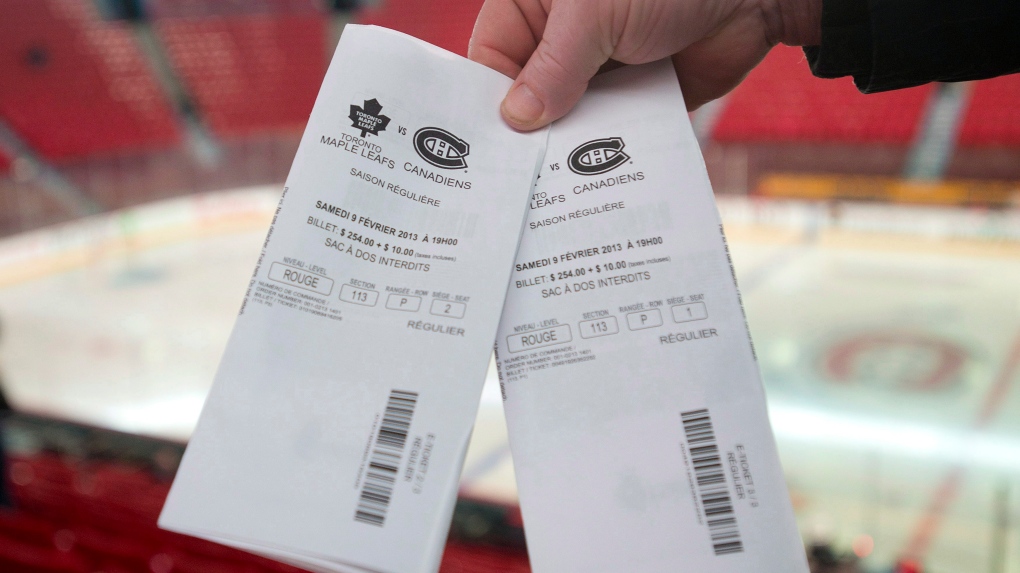 A man holds up tickets prior to an NHL hockey game between the Montreal Canadiens and the Toronto Maple Leafs at the Bell Centre in Montreal, Saturday, Feb. 9, 2013. (THE CANADIAN PRESS/Graham Hughes.)

Quebec Superior Court has awarded nearly $45,000 to a man whose former brother-in-law deprived him of their Montreal Canadiens season tickets over a family dispute, ruling that he had no right to unilaterally deny access to the coveted seats.

The ruling this month by Justice Jeffrey Edwards framed the case as determining the true value of Habs tickets and the prejudice that arises from being deprived of them.

The dispute between Louis Terzopoulos and Petros Sakaris dates back to 2014, when Sakaris refused to provide Terzopoulos access to the tickets they had shared for 19 years.

The pair had been splitting season and playoff tickets since the 1995-96 season, beginning during the Canadiens final year at the Montreal Forum.

The tickets were transferred to the Canadiens' current home, now known as the Bell Centre, and were described in testimony as among the best seats in the house: above the penalty bench, on the centre-ice red line.

While Sakaris denied there was an agreement to share the tickets, the judge ruled there was overwhelming evidence that a contractual agreement existed between the pair.

The men were married to two sisters when they first obtained the tickets -- but the ruling suggests Terzopoulos' marriage breakup was the trigger for Sakaris denying him the tickets.

The legal fight between the two isn't over -- Sakaris's attorney says in an email he plans to appeal.