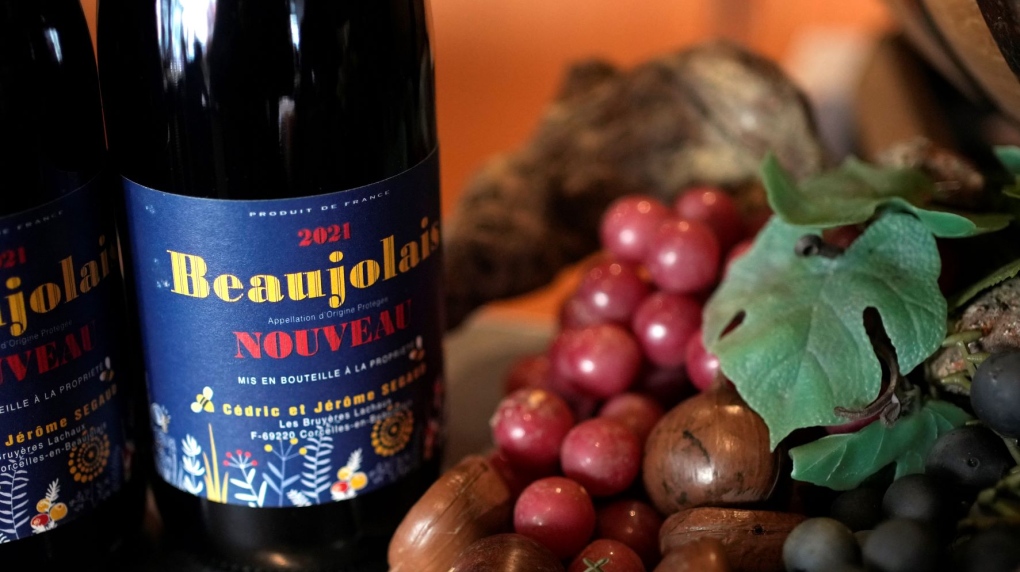 A Beaujolais Nouveau wine bottle is displayed in a restaurant of Boulogne Billancourt, outside Paris, Thursday, Nov. 18, 2021. Tannic acid is a naturally occurring polyphenol found in many beverages such as red wine and tea. (AP Photo/Christophe Ena)

Tannic acid, commonly found in red wine, can interfere with the ability of SARS-CoV-2 to infect and replicate in human cells, Quebec scientists have found.

Researchers at the Institut national de la recherche scientifique (INRS), Université de Montréal, McGill University, and Université du Québec à Montréal first discovered that tannic acid interferes with the binding of the virus' spike protein to the ACE2 receptors on the surface of cells, which the virus uses to enter and replicate.

Most interestingly, the researchers found that tannic acid interferes with the virus' spike protein, not the ACE2 receptors, thus minimizing the risk of adverse side effects.

"[Tannic acid] diverts the virus from its biological target," INRS professor Charles Ramassamy told The Canadian Press. "It's a huge advantage because it doesn't actually disrupt, or very little, the functioning of the organism. It will modify the structure of the [spike] protein, so it's like preventing it from attaching to the gateway."

The results are all the more compelling because all the researchers involved in this work came to the same conclusions, even though they used different techniques.

Taking their work a step further, the scientists identified a second mechanism by which tannic acid prevents SARS-CoV-2 from infecting human cells. Finally, they found that tannic acid can inhibit the activity of the viral enzyme responsible for virus replication.

"This is a multi-target mechanism of tannic acid, if you like, which can act on the viral protein, as well as on the inhibition of its entry into the cell, or even if the virus is already inside the cell, to prevent its replication," said Ramassamy.

The work was carried out in the laboratory on fragments of the virus, and not on the complete virus, for safety reasons. It also focused on the B117 variant, first detected in the U.K., which was dominant at the time, and not, for example, the Omicron variant, but Ramassamy said the results are very encouraging.

Tannic acid is a natural polyphenol found in many beverages such as red wine or tea, but in much smaller quantities than those used in the study.

"You'd have to drink a lot of cups of tea or bottles of red wine to get to the concentrations we're using," said Ramassamy with a laugh.

Instead, he envisioned the eventual development of tannic acid-containing tablets or nasal administration to prevent or inhibit SARS-CoV-2-induced infection.

Such a treatment would be less expensive than the antivirals currently on the market, and the side effects would be less because of the low toxicity of polyphenols. In addition, he said, tannic acid and its physiological derivatives have anti-inflammatory and antioxidant properties, both of which are beneficial during remission of SARS-CoV-2 infection.

The findings were recently published in the International Journal of Molecular Sciences.

-- This report by The Canadian Press was first published in French on March 9, 2022.