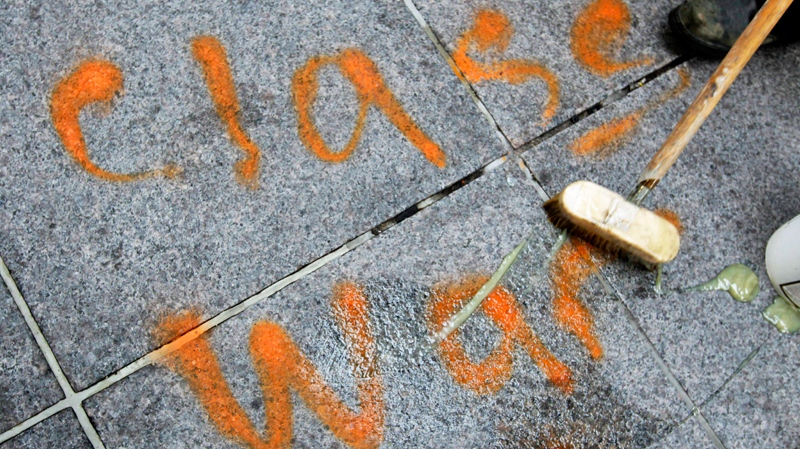 A Toronto city worker spreads a cleaning solution over a sidewalk spray-painted with "class war" along Bay Street in downtown Toronto, Sunday, June 27, 2010, following riots the night before during the G20 Summit. (AP / Carolyn Kaster)

If it makes you feel any better, Toronto, you're not the first Canadian city to have struggled with a post-summit hangover.

Many of the issues being dealt with today in the aftermath of a violence-plagued, controversial G20 gathering were dealt with nine years ago in Quebec City.

Toronto's mayor, for instance, is demanding federal compensation for the damage caused by pockets of unruly hordes.

There is a precedent: Ottawa chipped in on the cleanup costs after Quebec City's 34-country Summit of the Americas.

In the wake of that April 2001 gathering, the feds announced a $2-million fund to compensate merchants, residents and non-profit organizations for damages.

That summit in Quebec City was marked by the appearance of the now-infamous Black Block protesters who smashed windows and hurled projectiles at police.

That 2001 summit ended with 463 arrests, more than $2.5 million in damages, and widespread complaints about police manhandling peaceful protesters.

Much like Toronto, the 2001 summit was held within a fenced-in part of the city.

In both summits, at first, police held back somewhat as unruly protesters caused damage early on; then they responded far more aggressively on the second day, even against peaceful protesters, and were accused of abusing their powers.