A man was shot in the head and killed Tuesday night in the Montreal neighbourhood of St. Leonard, near the corner of Jean-Talon and Viau streets.

Police confirmed Wednesday morning that the victim of the shooting was 63-year-old Piero Arena, a twice-convicted drug trafficker reported to be linked to the city's organized crime world.

Montreal police are calling it the city's 18th homicide this year.

At about 7:30 p.m., a 911 call came in to say that shots had been fired in the area of a residential building near Jean-Talon and Michelet St., just east of Viau.

Officers headed there and located the victim in the garage of the building, an SPVM spokesperson said. He was declared dead at the scene. 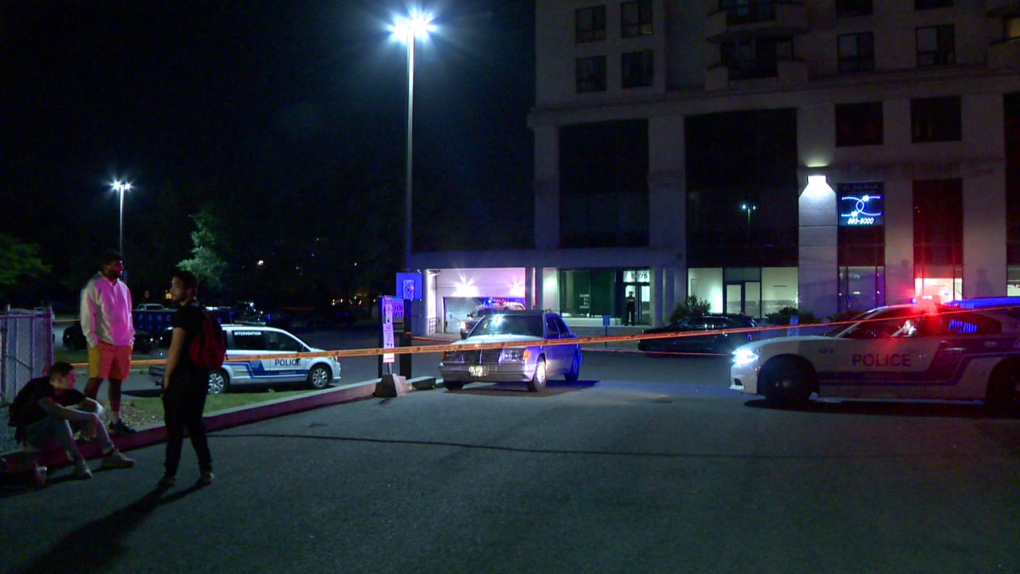 Montreal police are investigating after a man was shot and killed in Montreal's St. Leonard neighbourhood on Sept. 7, 2021 (Cosmo Santamaria, CTV News).

It's a large condo building, said a spokesperson. A neighbour to the building said the garage is located underground.

Police have not confirmed whether the victim was found in a car, and how many shots were fired, adding there are no identified suspects.

Late Wednesday afternoon, they said there are no new details they're ready to announce, though they said they would be looking into all possibilities as well as surveillance video from the garage.

They also declined to say which police units are assisting Major Crimes with the case, such as the organized crime unit.

Arena was well known to local police who follow organized crime. His first conviction on federal cocaine-trafficking charges stem from a case in 1991.

The second came after a police operation in 2010 that uncovered another cocaine-trafficking ring linking Colombia and Montreal. Or rather, an undercover agent was present as a potential future ring was in the process of being set up, with Arena acting as a go-between, according to court records.

Another man, working with someone from Venezuela, told the undercover agent that he was looking for "clients capable of rapidly disposing of a large quantity of cocaine," the filings stated.

Arena was one of the men who then claimed "to be able to find buyers" and to successfully set up such a large ring.

The group, after coming to an agreement, ultimately planned to import 300 kilograms of cocaine from Colombia through the port in Halifax.

Something appeared to go wrong -- the shipping container, when it arrived, was inspected by Canadian border agents and it was empty. But the co-conspirators were arrested and tried anyway, with their cases winding down between about 2013 and 2015.

Arena was one of the first in the group to plead guilty. He was sentenced to about seven years in prison, though it's unclear when he was released.

On Wednesday, media reports alleged Arena was the target of a failed assasination attempt on July 22 during a shooting at the Sorrento Café on Jean-Talon St. East, near des Angevins St. Montreal police would not confirm the claim when asked by CTV News.

A RASH OF GUN VIOLENCE

Amid the city’s spike in gun violence, Montreal has reinforced its police force (SPVM) with millions of dollars in funding in recent weeks.

“Since the beginning of the year, we have intensified our support for the SPVM and will continue in this direction in order to stop this violence as quickly as possible,” she said.

The morning before Arena was killed, mayors from several municipalities in Quebec unified their voices, calling on federal election candidates to present “clear and firm” gun control policy.

The Liberal government has come under fire for their firearm legislation in the past.

A bill tabled by the Liberal government in February put handgun management in the hands of municipalities, sparking uproar among city officials and gun-control advocates alike.

The Liberal Party is now promising to give provinces the power to legislate on handguns.