MONTREAL -- A 38-year-old Quebec man was arraigned Thursday afternoon on charges of criminal negligence causing death and bodily harm following a tractor accident that killed three children under five and seriously injured several others in a small town south of Montreal.

The driver of the tractor was arrested Wednesday night and appeared in court in Granby Thursday.

Police say alcohol may have played a role in the accident.

Police say six children and four adults were riding in the tractor shovel in Notre-Dame-de-Stanbridge around 7 p.m. Wednesday when, for an unknown reason, they were ejected from the vehicle.

Tragic story to report this morning. 3 children killed and others in critical condition in a horrific accident in Notre-Dame de Stanbridge after a Farm tractor was carrying wood and children in the front bucket where the children all fell out of the bucket. @CTVMontreal pic.twitter.com/ZSeLiPQ3TJ

“They were (then) injured by the tractor,” Sgt. Ingrid Asselin from the Sûreté du Québec told CTV Montreal.

Six others are injured, including two adults in critical condition. It is still unclear whether those involved were members of the same family or a group of friends celebrating Canada Day together.

The adults who sustained minor injuries will be questioned by investigators, and the tractor has been seized for analysis.

A TOWN IN SHOCK

The people of Notre-Dame-de-Stanbridge said they were struggling to cope with the horrific news.

“The municipality, how do we react to this?" the town's mayor, Daniel Tetreault, told CTV Montreal on Thursday.

Tetreault arranged for psychological help to be available in town on Thursday morning.

"You have to think about the witnesses, too. You’ll never forget seeing something like this," he said.

Neighbours said that everyone in the small community knows each other. Some had indeed raced to the crash when they heard sirens, ready to help, though they didn't know what had happened.

“I heard the police car come into the village, full speed with the sirens on, so figured something [was] going on,” said Luc Perreault, who lives near the site of the crash.

"I just took my car and got in and got here."

He wasn't ready for the horrific scene he found, with multiple ambulances in the road.

Before arriving, "I figured there’s a couple curves down there and it’s Canada Day, so probably a car accident or something," he said.

Another local man said people in town are trying to come to terms with their grief for those involved while also grappling with the decisions that led up to the incident.

“I can't imagine the tragedy for these people,” said Brais. “And I can't understand why… you [would] put some people in the bucket of a tractor...driving down the road.”

It seems “unbelievable,” he said. “I can’t understand why, you know. It's not made for that.” 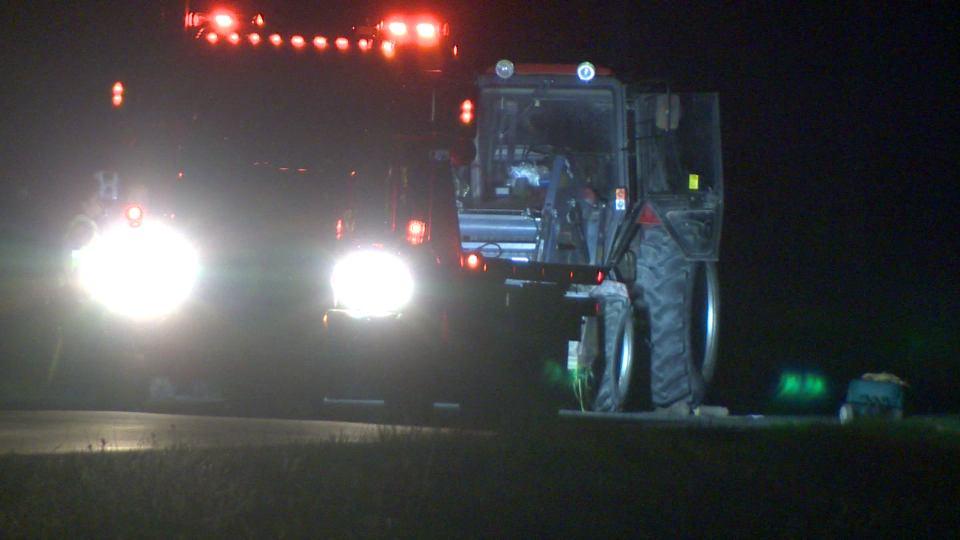 Asselin pointed out that riding in the shovel of a moving tractor is illegal.

"Tractors here are like trucks in Montreal," Tetreault said. "They’re everywhere. Sometimes people can be careless."

The man facing charges appeared in court by video conference. CTV cannot identify him because doing so could identify one of the victims.

His charge sheet lists nine victims -- three dead and six injured -- but the prosecution says they're not ruling out adding more charges to the two he faces, if circumstances change.

"If we have new evidence -- for example, that someone else is dead -- we could add another count for this," said Crown prosecutor Veronique Gauthier.

The man was released on $5,000 bail with his next court appearance scheduled for Sept. 28.

In the meantime he faces conditions of release, including being banned from operating a motor vehicle except in cases of medical emergency and except for work, where he will still be allowed to drive a tractor.

He's not allowed to consume drugs or alcohol.