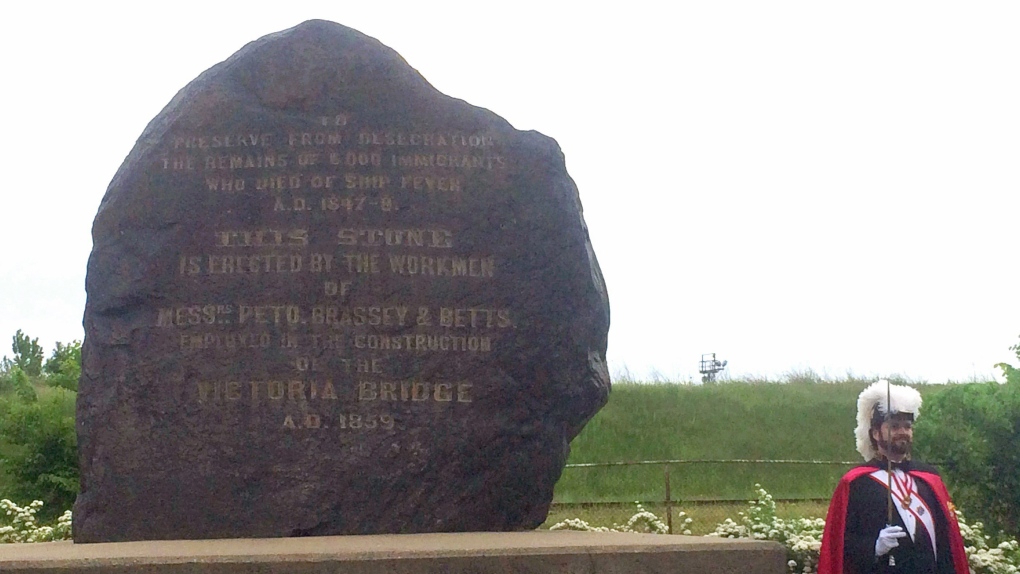 The 'Black Rock' or the 'Irish commemorative stone,' is shown in Montreal, Sunday, May 29, 2016. The stone commemorates the deaths of some 6,000 Irish immigrants who died of typhus in Montreal in 1847-48 after fleeing famine overseas. (Morgan Lowrie / THE CANADIAN PRESS)

While Montreal is generally viewed as a mixture of British and French influences, look closely enough and you'll see the Irish have left their mark -- including the 6,000 who lay buried in unmarked graves in the city's Sud-ouest neighbourhood.

In 1847, they came across the ocean on overcrowded ships in the hopes of a new life, but instead many collapsed and died near where they disembarked on the shores of the St. Lawrence River in almost two dozen fever sheds erected to contain the typhus epidemic.

Their bones are still believed to be scattered there, under parking lots, a railway line, and at the foot of the Black Rock -- a three-metre tall boulder erected in 1859 in their memory, which currently sits in a median between four lanes of traffic.

For over a decade, Montreal's Irish community has lobbied authorities for a park on the spot to serve as a more fitting memorial for the stone and the bones it guards, which historians believe to be the first-ever memorial to those affected by the potato famine, and the biggest Irish gravesite outside Ireland.

"You can't even get to the rock unless you take your life in your hands and run across the highway," said Fergus Keyes, head of the Montreal Irish Park Foundation.

"We want to make the area more commemorative."

Now, after years of being largely ignored by politicians, the dream is on the cusp of being realized thanks to an unlikely partnership with the province's biggest hydroelectricity provider.

When Hydro-Quebec purchased the land near the stone that had been coveted for the park in 2017 for a new substation, the Irish community panicked, Keyes said. But instead, the utility jumped on board as a partner, offering 3.5 acres of land for a future park that will be designed by the city and the Irish community.

Keyes said he's been touched by how the people at Hydro-Quebec, who are almost all francophones without Irish heritage, have embraced the project, offered funding and held numerous meetings with the community.

"They've taken an ownership of this effort, and it's quite interesting that they're so protective," he said.

At a recent meeting, when someone suggested the possibility of moving the stone -- a solution strongly opposed by the Irish community -- a Hydro-Quebec representative stood up and said, "We're not moving our rock," Keyes recalled.

Keyes said the city has also jumped on board, and now, instead of moving the stone, there's talk of instead moving four-lane Bridge street so the stone could sit in the centre of the new green space.

Donovan King, a historian and tour guide, said the Irish community "chernobyled" when Hydro-Quebec first bought the land. "Instead, they've turned into the best partners ever," he said.

As he led two dozen people on an Irish famine walking tour, he emphasized how the story of the 1847 tragedy is intertwined with that of Montreal's other communities.

As he paused by the crumbling greystone of the Grey Nuns former hospital, he described how three successive orders of nuns volunteered to nurse the sick, knowing full well that many of them would contract the illness and die.

Later, next to the Lachine canal, he pointed out the site where the first fever sheds were erected on the orders of a mayor, John Easton Mills, who would himself die of typhus after volunteering to nurse the sick.

Keyes said the future memorial park will pay homage not only to the 6,000 victims, but also to everyone who pitched in: clergy and military personnel who nursed the sick, Quebecois people who adopted orphaned children and First Nations people who contributed food and money to the relief effort.

His vision of the park includes a water feature, an interpretation centre and maybe even a small plot to grow Irish Lumper potatoes -- the crop whose failure set off the great famine and caused the exodus of 1 million people from Ireland.

If all goes well, he said the park could be ready in 2023, when he hopes the area will once again drawn in foreigners from other countries. Only this time, they'll be tourists.