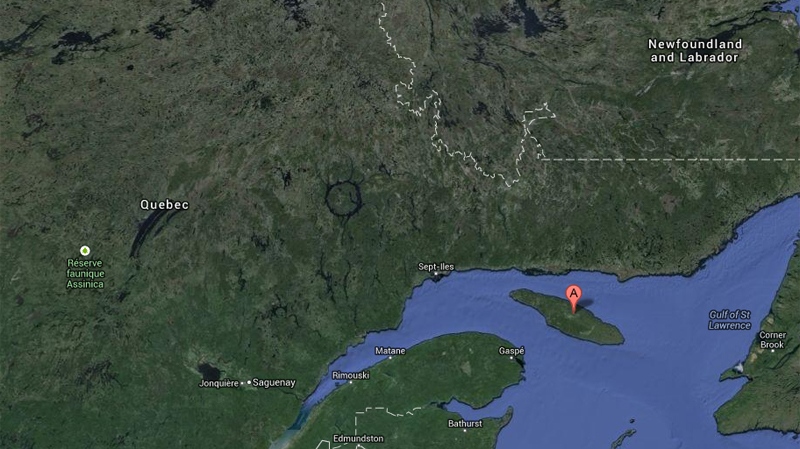 In this Google Map the Quebec island of Anticosti is marked by a red point.

MONTREAL - The details of a Quebec government deal to permit oil shale oil development on Anticosti Island have finally become public five years after the contract was signed..

According to documents issued by Petrolia (TSX: PEA) Hydro Quebec has not received any money yet but has invested $10 million to carry out work on the island.

Hydro swapped the right to its share of the 35 exploration permits in exchange for a gradual production charge, in the event that oil is extracted.

Corridor Resources (TSX CDH) owns 54 percent of the assets and will receive a proportional cut of any income.

The company also granted Hydro Quebec a mortgage of up to $10 million as collateral for the payment of the overriding royalties.

Petrolia has also agreed to pay Hydro $460,000 for use of its seismic data.

Hydro Québec will also have a right of first refusal on any transaction in which Petrolia cedes some of its rights to a third party as a result of the discovery of a mineable deposit .

The details of the transaction and the amount of the charge were previously kept secret since the agreement was signed in 2008.

Petrolia insisted on keeping the agreement confidential even though the Liberals urged the company to allow it to be made public since 2011.

Petrolia said that the PQ government's support for the project made it possible to share the details.

“I think the record was better explained to people and we think this is a calmer approach. The cards are slowly starting to fall into place, for the state, for us and others, I guess," said Proulx.

“I think Hydro Quebec negotiated a bad deal,” said Legault. He suggested that the government should take over the companies involved.

The Parti Quebecois said after it won a minority government last year that it wanted to know the contents of the secret deal.

The PQ has confirmed that it will move ahead with exploratory drilling on the island, even if it doubts the dizzying estimates that Anticosti contains tens of billions of barrels of oil.

Last April Pauline Marois made reference to the possibility of Quebec coming into considerable mineral wealth, possibly in reference to the oil beneath Anticosti, which some estimates put at about 300 million barrels.

The province has owned Anticosti Island since buying it from Consolidated Bathhurst in 1974 for about $25 million.

It had been used as for logging for several decades but is currently used for hunting excursions.

Fewer than 300 people currently live on Anticosti, which is about the geographical size of Puerto Rico. The island is home to 160,000 deer and much other fauna and flora.