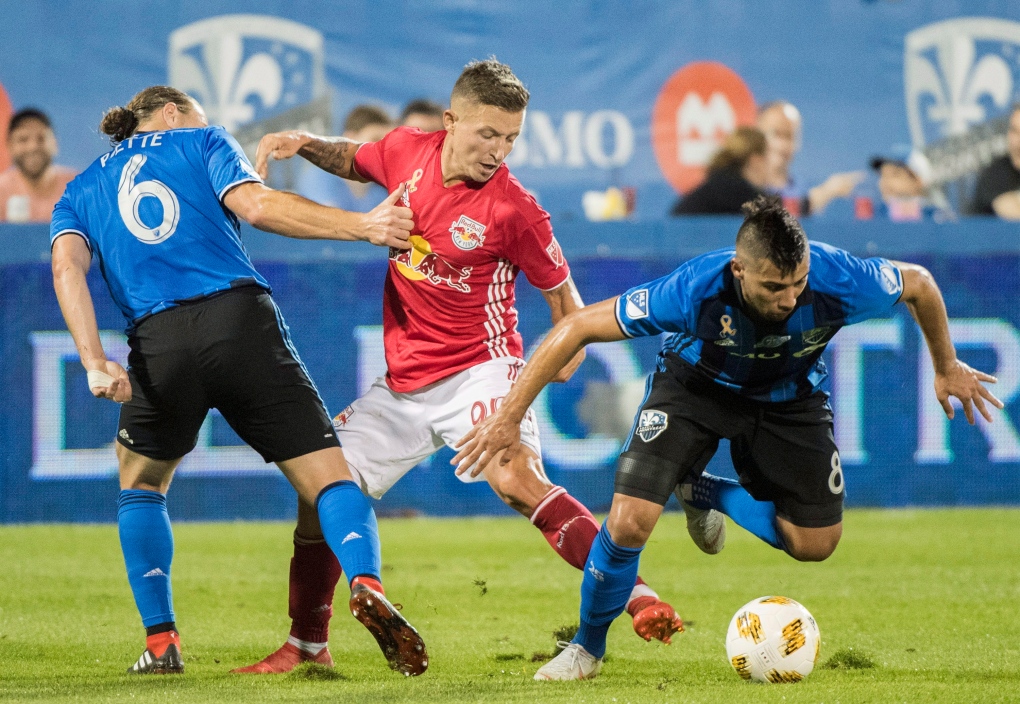 French defenders Rod Fanni and Bacary Sagna each scored a header goal as the Impact overpowered the league's best New York Red Bulls 3-0 at Saputo Stadium. Both Frenchmen scored their first goals with Montreal, while Ignacio Piatti added a third.

The victory came one week after a humiliating 3-1 loss against their arch-rival Toronto FC last Saturday.

"We needed to reassure ourselves that we can be a good team," said Impact manager Remi Garde. "I really liked the team spirit today. The togetherness we showed was very important. I insisted before the game that, without that, we couldn't compete against this team."

Impact midfielder Michael Azira mentioned that Garde tried his best to build confidence in his players during a meeting in earlier this week.

"We just demanded more from each other," Azira said. "We have quality in this team. We can get complacent."

The Impact (11-14-3) entered the game with just one win in their last five league matches, despite holding down the sixth and final playoff spot in Major League Soccer's Eastern Conference standings. They left the pitch with their fourth consecutive home victory over the Red Bulls, and their ninth home win of the season.

Meanwhile, the Red Bulls (17-7-4) saw their four-game road unbeaten streak snapped at the hands of the Impact. New York has never won a game at Saputo Stadium.

The Impact were more dangerous than their New York counterparts for most of the contest. The home team had 14 shots, including eight on target. Piatti and Alejandro Silva had four chances each.

Fanni's goal came off a corner in the 30th minute. Midfielder Saphir Taider sent the ball into the penalty area off a corner. Fanni rose and headed the ball onto the far side post and into the back of the net. His last professional goal came as a member of Ligue 1's Marseille more than a year and a half ago.

Sagna found the back of the net eight minutes later. Off an Impact free kick, defender Jukka Raitala headed the ball toward the far post. Sagna was the nearest player to the ball and the ex-Arsenal and Manchester City defender directed the ball past Red Bulls goalkeeper Luis Robles. The 35-year old Sagna was acquired by Montreal on the day of the transfer deadline on Aug. 9.

"I'm very happy for (Sagna) because he's a very good teammate and friend," Fanni said. "He's very (helpful) for the team. Because he's very good with his feet and with his head."

Montreal nearly added a third goal in the 75th minute courtesy of Piatti. However, a video review overturned the goal as the Argentinian was in an offside position. The captain eventually added the final nail in the coffin during stoppage time, scoring his 13th of the season with an assist from Silva.

NOTES: 18,458 were in attendance for Saturday's contest...The Impact loaned defender Michael Petrasso to the Ottawa Fury of the United Soccer League Friday, for the rest of the 2018 USL season...Saturday's match was the fifth in 15 days for the Red BullsΓÇªBoth teams won't play another league game for at least two weeks thanks to the September International break. Montreal will play a road game against Philadelphia Sept. 15, while New York will visit D.C. United on Sept. 16.