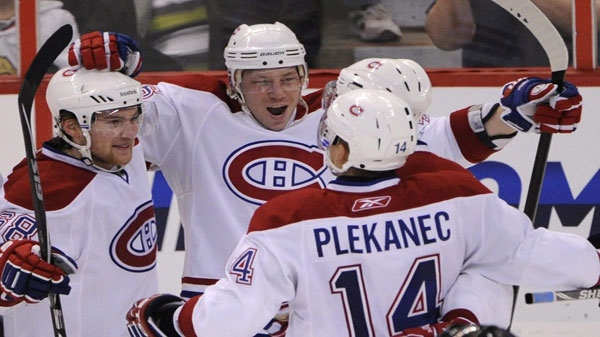 MONTREAL - I find it somewhat astonishing that European players still have a tendency to believe that comments made to the local media will somehow remain in the bubble of their native language.

But every summer, we invariably catch wind of some inflammatory comments from a player speaking to their local paper, and this time it's Andrei Kostitsyn who has stepped in it.

He and brother Sergei were interviewed by goals.by in their native Belarus, and AK's comments about his relationship with Jacques Martin were made in such a way that you would have to believe he thought they would never get out.

You can read the Google translated version (where it appears reporter Alexander Vankovich refers to Sergei as "earrings"), or you can check out the Twitter timeline of North American Sport-Express correspondent Slava Malamud, who translated the comments in a far more legible fashion.

In summary, Kostitsyn said the reason last season was so inconsistent for him was because Martin's use of him was inconsistent as well, which is a fair assessment. He said it's harder to produce when playing on the third or fourth line, which is true. He also said he tried to speak to Martin about it, but that the coach didn't care.

Basically, my take on it is there is nothing shocking in what Kostitsyn said about his relationship with Martin. Frankly, I think if you asked most of the players on the team they would also have the impression that Martin doesn't care, because it does not appear as though he is really a player's coach.

That's what made Kirk Muller's role so important, because he was the buddy coach, the one players can go to with grievances and the one who kept track of the pulse in the room.

That's what Randy Cunneyworth will have to do this upcoming season.

But even though I don't think Kostitsyn said anything that wasn't true doesn't mean I agree with him saying it. The Canadiens are not exactly an organization that appreciates having dirty laundry aired in public. In fact, I can't think of a single club that does like it, but some are more tolerant of it than others.

Calling out your coach a month ahead of training camp when entering a season where you're about to hit unrestricted free agency is not exactly a great career move.

Kostitsyn also mentions in the article that his agent, Don Meehan, advised him to simply play hockey.