QUEBEC CITY -- Quebec will increase vaccinations and variant screening in Montreal, which remains the province’s pandemic hotspot even as reported cases decrease.

Health Minister Christian Dubé was joined by Health Director Dr. Horacio Arruda on Thursday to give an update on the coronavirus in Quebec, which has been redefined in recent days as new variants of the virus emerge.

Only 8.5 per cent of infections are sequenced for variants, according to Dubé. That means there could be a lot more variant cases circulating in the province undetected.

On Thursday, Dubé said he wants to sequence every positive case in Greater Montreal.

To do that, the province has given the public health institute $11 million, though it remains unclear if it has the equipment available to reach that goal.

“I was told that they could screen for the variants next week,” said the minister. “But at what level? I don't know, that's what I don't know.”

While cases have gradually come down across Quebec in recent weeks, Dubé says new variants, which are potentially more contagious than the original strain, could turn that trend around.

“The trend is fragile. The arrival of the new variants could quickly change the situation.”

On Wednesday, Montreal’s Public Health Director Mylene Drouin announced that there were 44 potential variant cases in the city.

“We want to make haste,” said Arruda. “The issue here is to go forward with full speed ahead on screening for variants.”

'I'M PUTTING POLITE PRESSURE ON THE FEDS': VACCINATIONS IN MONTREAL

Dubé said he also wants to increase vaccinations in Montreal.

He did not provide details on an updated rollout plan, saying he was waiting for a recommendation from public health.

The rate of vaccinations in Quebec has fluctuated significantly while dose delivery fell behind schedule in recent weeks.

The minister said he’s “putting polite pressure on the feds” to be clearer about when Quebec will receive more doses.

“Give me details. Give it to me by week.”

QUEBEC NOT READY TO RECOMMEND DOUBLE-MASKING, DUBÉ DOES IT ANYWAY

A day after the American Centers for Disease Control and Prevention (CDC) found double-masking – wearing two masks at once – to be more effective against the virus, Quebec’s own health minister showed up to the conference doubled up.

Dr. Arruda said public health needs to do more research before it can officially recommend double-masking for Quebecers, but that didn't stop Dubé from wearing a procedural mask under his cloth mask on Thursday.

“I'm not old enough to get vaccinated. So, I'm going to take the maximum precaution,” said Dubé.

“I’m lucky to have gotten such a lively mask, I think it puts colour into our lives,” he said, holding up his multicoloured, patterned mask. 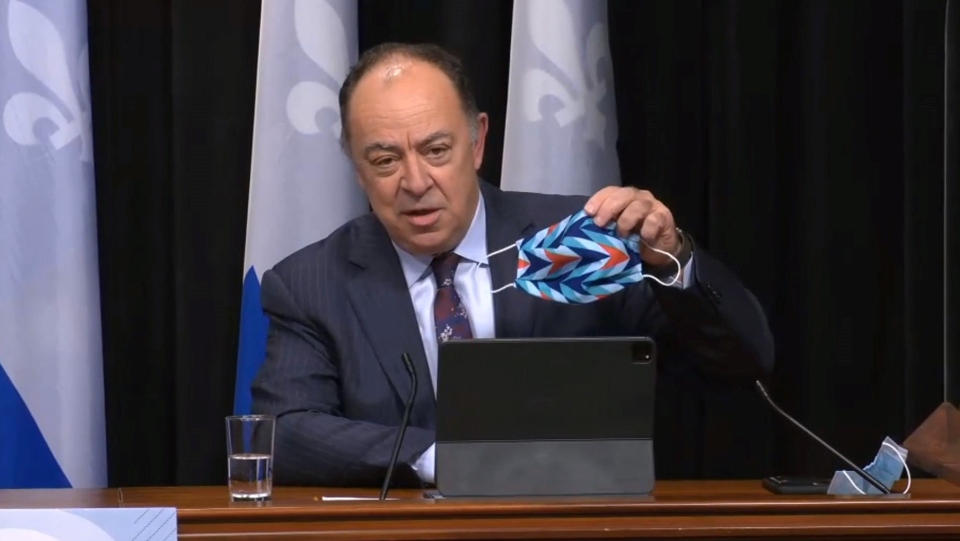 On Wednesday, the CDC reported the results of a lab experiment that spaced two artificial heads two metres apart and checked to see how many coronavirus-sized particles spewed by one were inhaled by the other.

The researchers found that wearing one mask -- surgical or cloth -- blocked around 40 per cent of the particles coming toward the inhaling head. When a cloth mask was worn on top of a surgical mask, about 80 per cent were blocked.

LISTEN ON CJAD 800: Can a province buy their own vaccines? Tom Mulcair can be heard every weekday morning at 7:40 on The Andrew Carter Morning Show.