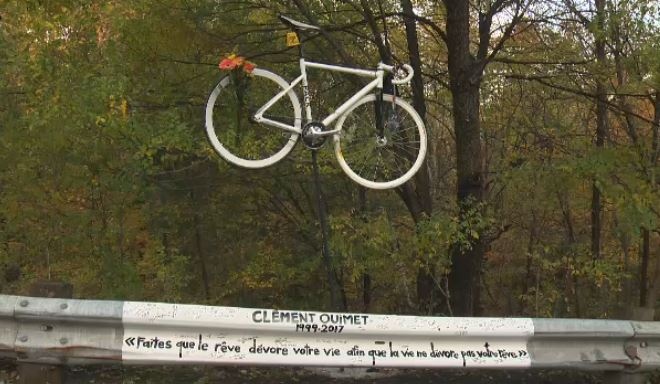 Clement Ouimet's bike will remain at this site in his memory.

The Quebec coroner released his report regarding the death of 18-year-old Clement Ouimet - a cyclist killed last October on Camilien-Houde way.

The site of the death is an area where drivers frequently make unlawful U-turns because there is no other way for someone in a motor vehicle to get from the lookout to the summit of Mount Royal.

According to the analysis by Dr. Jean Brochu, Ouimet struck the left rear side of an SUV when it made an illegal U-turn on the morning of October 4, 2017.

The driver first swerved to the right and it appears Ouimet went to pass on the left, likely thinking the vehicle was parking.

At that point the driver cut across the double-yellow line and made an unlawful U-turn, driving directly into Ouimet's path.

The maneouver likely took Ouimet by surprise, Brochu writes in the report, because there was only one metre of skid marks on the ground from where he braked.

Although he was wearing a helmet at the time, the report states that Ouimet's official cause of death, at 10:43 p.m. later that night, was craniocerebral hemorrhage.

The driver was not charged.

Three collisions between cyclists and cars had been reported in the same spot prior to Ouimet's fatal accident.

Brochu acknowledges that the debate over what to do next has been contentious. It rests on the fact that drivers make U-turns on the mountain, even though they're prohibited, because there is no way to drive from the lookout to the top of Mount Royal.

The City of Montreal recently launched a pilot project, closing off a section of Camilien-Houde way to automobile traffic.

But this doesn't address the fact that drivers cannot safely or easily change direction while driving over the mountain - which would essentially prevent drivers from making illegal U-turns.

If the city decides to extend to project and maintain the road closure on Mount Royal, there will need to be some rearranging done and additional measures provided to Montrealers, including the use of a shuttle service to access Mount Royal park.

Overall, Brochu writes that the "best measures need to be taken to assure the security of the most vulnerable road users, not only on Mount Royal, but throughout the island of Montreal."