MONTREAL -- Another cell tower in Quebec – the fourth in just four days – went up in flames north of Montreal early Tuesday morning.

About 20 Laval firefighters were sent to douse a fire at a Lindbergh Street cell tower at 4:01 a.m. The fire department said it was relatively easy to put out, and are estimating $250,000 worth of damages.

“The fire was located between the communications antenna and an adjoining trailer,” said Laval fire chief Vincent Mercier. “There is a quilt of wire running from the antenna to the building, and that’s what was set on fire.”

This is the second time since Friday that Laval firefighters have responded to a call about cell towers.

“We won’t permit ourselves to make suppositions or suggestions, but it’s definitely suspicious,” Mercier said.

On Monday, firefighters in the Laurentians responded to calls 20 minutes apart about cell towers that were ablaze in the towns of Piedmont and Prévost. Quebec provincial police described the fire in Piedmont as significant and the one in Prévost as minor.

“While we are thankful no one was hurt, it is very concerning that critical infrastructure needed to keep Canadians connected, including to emergency and 911 services, appears to have been deliberately targeted again, putting lives at risk. Our network is a vital lifeline that connects each and every one of us, especially during this public health emergency. Our team was able to optimize tower equipment in the area to ensure our customers stayed connected,” a Rogers spokesperson said in a statement.

Laval’s first case on Friday was at a cell tower located behind the Plaza Laval Élysée in the Chomedey neighbourhood. At first, the tower was incorrectly identified as one that supported 5G technology. Rogers Communications – who owns both Laval towers – later confirmed that it was only used for 3G and 4G networks.

5G towers have been a target in many places around the world as of late, as conspiracy theories claim the technology can negatively impact health – some even going as far as to suggest links between the technology and the COVID-19 virus. 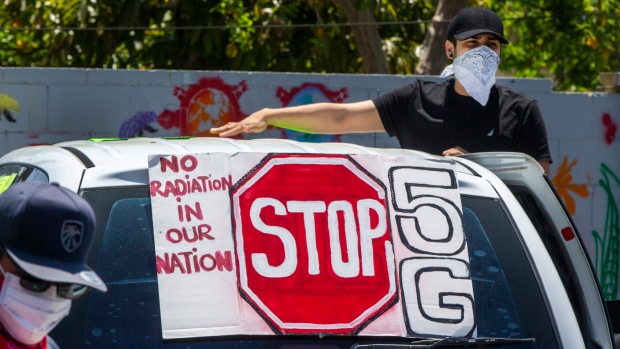 The towers that are being targeted are usually just 3G and 4G towers, according to telecommunications companies. The tower torched in Laval Tuesday is indeed a Rogers 3G/4G cellular tower, the company confirmed.

When asked about the recent string of cell tower fires in Quebec and around the world, Chrystia Freeland, the Deputy Prime Minister of Canada, said the government is working hard to push back against false information.

“Misinformation is especially dangerous at a time like this,” she said, referring to the COVID-19 pandemic. “It's a time of both heightened anxiety and tremendous change. And so, disinformation can have a particularly pernicious effect.”

Federal Innovation, Science and Economic Development Minister Navdeep Bains added in a tweet: "Very troubled by the reports of vandalism of Canadian cell towers. As many of us are staying home, we’re relying on wireless and internet services to connect to our work, school, and loved ones. These criminal acts are completely unacceptable and threaten emergency services."

The theories gained so much traction that the World Health Organization stated back in February that after much research, there is no correlation between cellular networks and health problems.

All four cases in Quebec have been turned over to investigators who handle major crimes.

“We’re analyzing the Laval cases, there are expert reports that have been performed on all the scenes,” said Sûreté du Québec spokesperson Marc Tessier.

On Monday, the RCMP said it’s ready to assist provincial police if it comes to it.

“The RCMP continues to work with police, government and industry partners to protect Canada's critical infrastructure,” said the RCMP’s Catherine Fortin in an emailed statement to CTV News. “Investigators are constantly assessing threats and risks and are implementing the necessary measures to protect the safety of the public.”