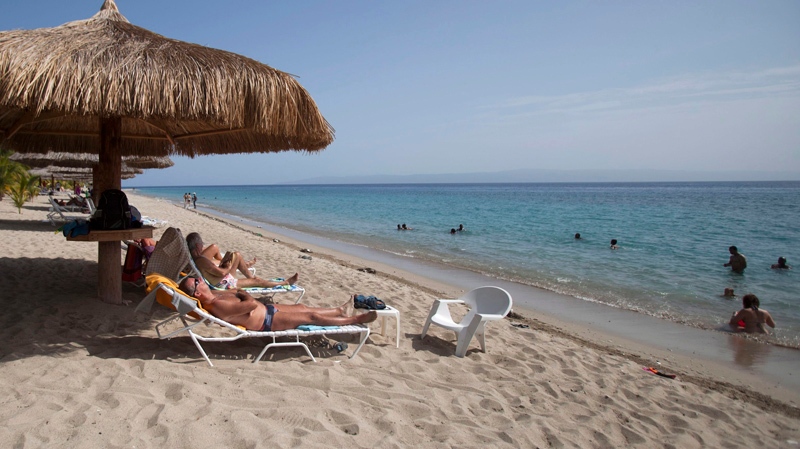 In this June 29, 2013, tourists rest seaside while others wade in the ocean waters at the Club Indigo beach resort in Montrouis, Haiti. While many in Haiti welcome anything that can create jobs, some critics are questioning the government’s priority of trying to attract high-end tourists at a time when the country faces so many other problems, such as high unemployment, a deadly cholera outbreak and lack of housing for people displaced by the earthquake more than three years ago. (AP Photo/Dieu Nalio Chery)

The latest tourism statistics demonstrate that Canadians are increasingly visiting to Haiti, as 33,000 traveled last year to what was once known as the Pearl of the Antilles.

Canadians formed a significant portion of the 420,000 visitors who came to Haiti from around the world in 2013.

Minister of Tourism Stephanie Villedrouin has seen his budget doubled to $4.7 million in hopes of changing the international perception of Haiti.

Rather than trying to compete directly with Caribbean competitors, Haiti is focusing on its unique history and culture.

The country is still considered underequipped for a massive tourist influx, as the country had only 3,200 hotel rooms last year, according to the Ministry of Tourism.

Many tourists come to the island by cruise ship and stay for only one day, in a secure area.

Some have criticized the Haitian government for devoting so much money to promoting tourism while many others are in great need.

Villedrouin, however, notes that tourism promotes employment and attracts wealth.