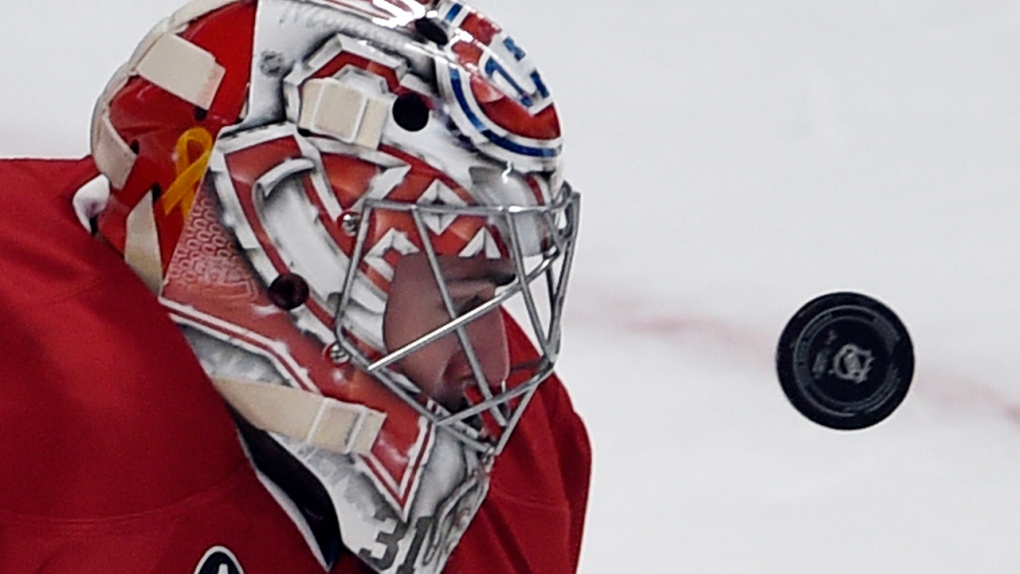 Price: Out of words. I am wordless. He's the best goalie in the world and this season he is one of the best of all time. It is hard to compare generations because the style has changed so much but in this generation he is the best and if I am allowed to go back one generation then he is in the same class as Hasek. The save percentage is similar. Only Hasek and Thomas one season are at a save percentage like Price this season for a goalie who has a lot of minutes. The goalie can't be faulted for the goal obviously. It was a deflection off of Gilbert in front from two feet.

Plekanec: Thought he was the best forward on the night. The highest quality chances were his with Pacioretty - mostly on the penalty kill. It was a night where his intelligence comes through. Hard to find a smarter forward on the defensive side of the puck.

Pacioretty: Had his chances. That's what you hope for from a goal scorer. So solid on the defensive side of the puck too. He has become a complete player. Considering his contract in a cap era, he's close to the best 'buy' in all of hockey. Tavares and Pacioretty - let's call them 1 and 1A.

Desharnais: The work rate of Desharnais even on an off night is excellent. Some days the competition is a little too physical but he always gives 2nd and 3rd effort.

JDLR: Weird to see a 19 year old on the same line with Lars Eller and it's Eller who is on the wing but this kid is a special player. People always asking how many goals can he score though. I say a lot. 20 to 25 in today's tough-to-score NHL is a good number and I can see JDLR having multiple seasons inside that range in his career. He will get a lot of minutes playing that sound defensively. He's in his first 20 games and looks like a four-year veteran smarts wise.

Smith-Pelly: Sometimes you have to actually meet the needs of your team. Devante Smith-Pelly is never going to look like Sekac. He's never going to score pretty goals like Sekac can. However, you can't win a Cup with 12 Ovechkins. You can't win with 12 Sekac. The hit that DSP threw on Boyle is what the Habs lack. It was Lucic-esque. The DSP Train on Track 21 steamrolled Boyle even though it was Boyle who was doing the charging. When speed and mass meet mass it isn't supposed to get bowled over by just mass. DSP is going to punish some people in the playoffs and the fans are going to love it. Don't get me wrong. I really love Sekac's skill set but a team is a lot of elements. That's why being a good GM is so important.

Petry: If you're ever looking for an example of how little a plus-minus can mean then look at Jeff Petry. He was a lower minus than the North Pole in Edmonton but in Montreal all you see is smart and steady. He might be the Habs third D at this point. He or Nathan Beaulieu are for me, which means he probably is three in Therrien's eyes because Beaulieu's ice time has diminished since Petry's arrival. Nothing spectacular but so much simply right. He wants between $4 and $5 million per in a new deal. Let's see if he falls in love with this environment. That's always the advantage when you have the player. It didn't work out with Vanek. Let's see if it does this time. If I am Bergevin and I had to make the call today, I would make an offer.

Coach's decision on PAP. I don't know what the plan is here. Parenteau has one more year left. What are they going to do? He was playing before the concussion. Not well but he was playing. He lost his job because he had a concussion. He was not good in his one game back but one game? That's it? Therrien has to give this player another chance. Let him get at least two more games in the next five. If he can't implicate himself in the action, then let the punishment commence. For me, this is too much punishment for getting a concussion and needing to recover.

The fourth line. Not sure if the players deserve the tag though or the coach's usage, but when the fourth line plays that seldom you're just asking too much from the other 3 and they're going to lose their assignment in a mental lapse brought on by a physical fatigue. If the fourth line can't even play when push comes to shove, the playoffs will spell trouble.

The speed of the Lightning was impressive to watch. They backed up the Habs D more than any team all season. They won zone entries with ease as the D kept going deeper and deeper trying to ensure they wouldn't be beaten for speed.

Not a good match up for the Habs in the playoffs. The Habs will not find the going as easy as last year. Just too much hockey played in front of Carey Price. The law of averages gets to play out in its correct way the longer the law is applied.