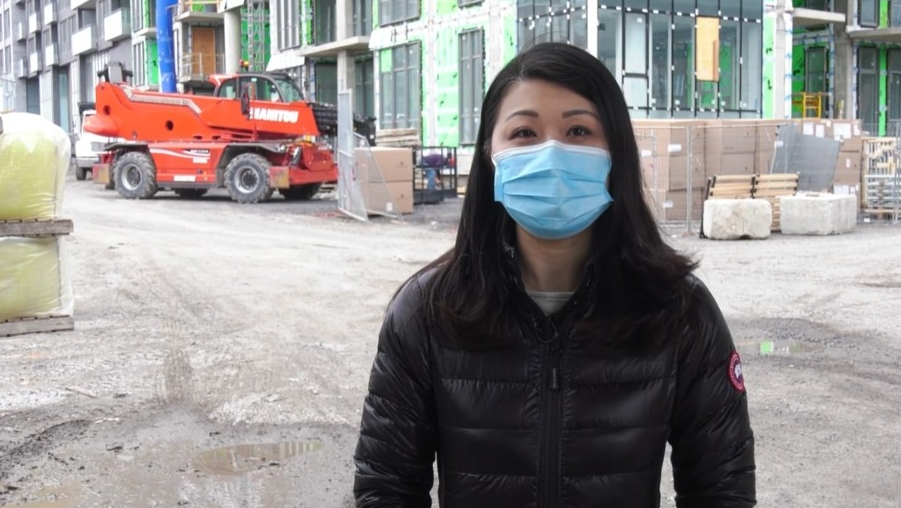 Ariel Chuang says she can't afford the Montreal condo she put a deposit down on anymore after rising costs.

MONTREAL -- A Montreal woman who signed a deal to buy a condo was surprised when she discovered the price had gone up by $50,000 – a cost the builder pinned on higher construction costs.

Ariel Chuang was ecstatic about the prospect of moving into her new condo in Old Montreal. Before the pandemic, she ordered a one-bedroom unit in phase 8 of Le Solano.

“I really love Old Montreal, and I saw this condo going up and I decided to give it a try,” she said.

The agreed price was $510,000 including sales tax and an indoor parking spot, but last week, Chuang was informed the price was being increased by more than $50,000. The seller blamed higher construction costs.

“I’m devastated,” she said. “I’m disappointed because I cannot afford it anymore.”

Chuang never noticed the fine print in the contract that said the seller can raise the price by up to 10 per cent if construction costs go up.

“The seller never mentioned such a clause”, she said. “They should have, at least, made me initial that part of the contract. Now, I have to pay another $10,000 - $20,000 down payment and then my mortgage will be increased by another maybe $200 per month.”

The head of L’Association des consommateurs pour la qualité dans la construction, a consumer advocacy group specializing in construction issues, said since February, he’s received a lot of calls from people who are in the same situation, and worse.

“In this case, at least there was something in the contract,” said association director-general Marc-Andre Harnois. “But in most cases, people are at a fixed price and the contractor still tries to raise the price.”

Harnois agreed construction costs are way up since the pandemic, but he said that alone doesn’t justify the increases he’s hearing about.

“We see a lot of (increases) that are way higher than the material (increase). We’ve seen some raises of more than a hundred thousand dollars for normal houses. That’s not the materials that justify that.”

He believes, in some cases, it’s the seller taking advantage of the hot real estate market.

“They know that if they we’re selling that house, actually it would be at a better price, so they try to have the actual price instead of the price they contracted for,” he said.

Harnois blames a loophole in consumer laws that he says protect homeowners only once they own the home and not while they’re shopping.

As for Chuang, she’s now trying to get out of her purchase, but so far the seller won’t let her.

She says it’s a lose-lose proposition: either she pays more or has to restart the whole process of looking for a new home.