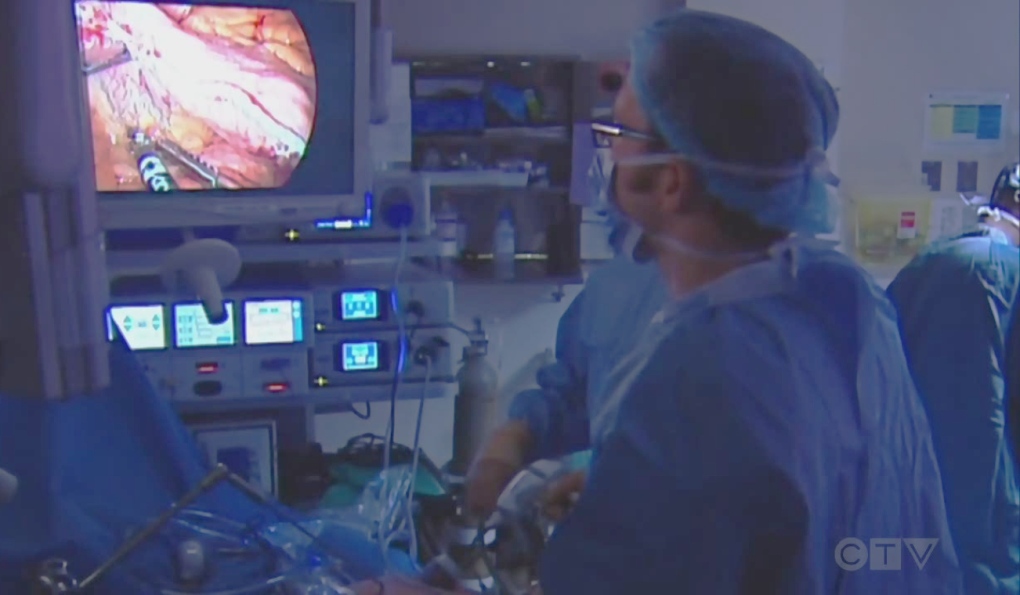 A team of surgeons in Sudbury recently completed the first bariatric surgery ever to take place in northeastern Ontario. Otherwise known as weight-loss surgery, the operation is being hailed as a game-changer for those in need of intervention. (Photo from video)

Significant weight loss following bariatric surgery is accompanied by an impressive rejuvenation of the brain, Quebec researchers have found.

According to a multi-university study, patients' brains appeared more than five years younger two years after the procedure.

"This really suggests an improvement in brain health after bariatric surgery," summarized study leader Andréanne Michaud, a professor at Université Laval's school of nutrition and a researcher at

School of Nutrition and a researcher at the university's cardiology and pneumology institute.

The researchers used magnetic resonance imaging on roughly 600 healthy subjects to document changes in the brain's grey matter density that occur through the aging process.

This model was then applied to a group of about 30 obese patients "to assess how different their neuroanatomy is from the healthy population," Michaud said.

"We saw that there was an increase in brain age with severe obesity," she added.

The images were first taken two months before surgery. Then, they were taken four, 12 and 24 months post-op. One year after surgery, the patients' brains read as approximately three years younger. Two years later, they read 5.6 years younger.

"So it seems to be associated with weight loss, but also with improved cardiometabolic health," Michaud noted. "Of course, we can't rule out that it's because the person made changes in their lifestyle, in their eating habits, but we couldn't assess that in the context of our study."

Just as obesity is a multifactorial disease, it's likely that multiple mechanisms also underlie this brain rejuvenation, she said. Reduced inflammation, improved brain vascularity, or changes to gastrointestinal hormones or microbiota are all intriguing leads.

Michaud and her team of researchers from Université Laval, McGill University and the Université de Montréal continue to track these patients to determine if the observed gains are maintained, and if they translate into improvements on tests measuring cognitive abilities.

The study findings were published in the October issue of the NeuroImage journal.

This report was first published in French by The Canadian Press on Oct. 5, 2022.

NEW | 'Not looking for a fight' but nothing off the table when it comes to Alberta sovereignty act, PM Trudeau says

Statistics Canada says there were 2.8 million fewer commuters in 2021 than in 2016, as the pandemic drove a shift toward remote work.

In the wake of southern B.C.’s first major snowstorm of the season, more than 100 schools in Metro Vancouver and the Fraser Valley are keeping their doors closed Wednesday.

Ontario's auditor general says the province wasted 38 per cent of COVID-19 vaccine doses between February and June because it overestimated demand for boosters.

A member of the Royal Family's household has left her role after making 'unacceptable and deeply regrettable' comments about race and nationality to a woman at a grand reception at Buckingham Palace, a spokesperson said on Wednesday.