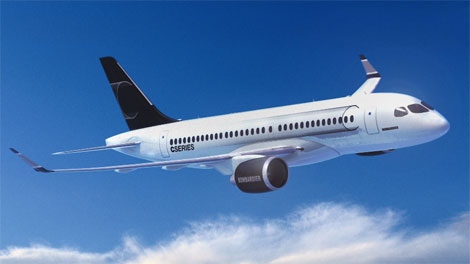 The small airport in east London is preparing to apply early next year for an expansion that would allow larger aircraft, such as the 110- to 125-seat CS100 CSeries, to use the facility without extending the runway.

The airport described as an aircraft carrier has a short runway that requires aircraft to make steep descents and takeoffs, which limit the size of planes that can be used.

The Montreal-based manufacturer says its smaller of two CSeries models fits the bill and meets the strict noise limitations placed on aircraft.

Airplanes using the closest airport to London's downtown core have grown in size since its opened 25 years ago. It can now accommodate Bombardier's large Global business jet along with 70 to 80 seaters such as the Q400. That's up from the 30 to 50-seat planes that initially flew into the airport.

British Airways offers daily flights to New York using an Airbus 318. However, the flights configured with 32 business-class seats must stop in Shannon, Ireland.

The CSeries could make the trip direct to the U.S. banking capital with a reduced payload.

At least one customer, Odyssey Airlines, is reportedly planning to offer this service, although Bombardier said the plane will mostly be used to connect London to European cities.

It is taking the first of the 30 firm orders for CSeries ordered by the Lufthansa Group.

Malmo Aviation plans to use the five CS100s ordered by Braathens Leasing to fly out of the city airport in Stockholm, Sweden.

Geneva-based PrivatAir is also a CSeries customer but hasn't said where it would fly.

The top five destinations from London City are Zurich, Amsterdam, Edinburgh, Geneva and Frankfurt, with New York's JFK ranked 24th. The airport has the highest proportion of business travellers of any major U.K. airport, with a promise of quick connection from airport to the City of London just 11 kilometres away.

The constrained footprint of the London airport currently forces planes to double back onto the runway before they can proceed to gates. The expansion to be completed by 2015 will expand these non-runway areas that limit the number of takeoffs and landings.

Poutissou said Bombardier has consulted with the airport's operators about the space needed by the CSeries, whose deliveries are expected to begin by mid-2014. He said the aircraft was specifically designed to have the flexibility for short runways, challenging conditions and longer-range missions.

"London City being one of those benchmark-type airports, it was very important to us that the CS100 would be capable of being able to fly out of London City."

David Tyerman of Canaccord Genuity said the upgrades to London City Airport is a very small piece of a very big puzzle Bombardier faces to make the CSeries a commercial success.

The features that make the CSeries attractive for London City Airport also make it a good fit for other constrained airports in the world, but Tyerman doesn't believe it's going to drive many aircraft orders.

"The CSeries is going to have to make its way in a vast number of markets all over the world and places like China are going to matter a lot (more)," he said.

Parts of China have challenging operating conditions due to high altitudes, short runways, steep takeoffs and landings, and harsh climate.

Poutissou agreed that London City Airport won't drive the success of the CSeries, but he said some of the features that make it attractive for London also apply to so-called hot/high conditions in China, Central Africa and around the Andes in South America.

Following an order from airBaltic and a letter of interest from an undisclosed airline in the Americas, Bombardier has 148 firm orders for the CSeries and commitments and options for up to an additional 234 aircraft.