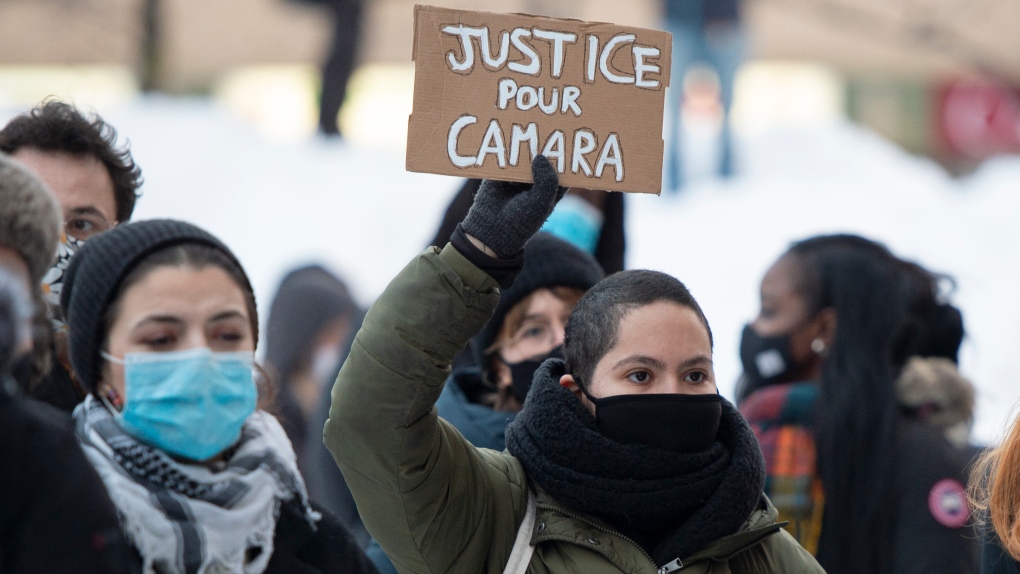 People take part in a protest to denounce police abuses and in support of Mamadi Fara Camara and his family on Friday, February 5, 2021 in Montreal. Camara was released after being arrested and detained for six days after being accused in an assault on a police officer last week. THE CANADIAN PRESS/Ryan Remiorz

MONTREAL -- We blamed Black Lives Matter (BLM) for being too radical, even too violent. Now, we're learning that BLM has been nominated for a Nobel Peace Prize by a member of the Norwegian parliament. This is a prize for which the SPVM (Montreal Police Service) will never be nominated.

Contrary to popular belief, the best university degrees and social status are not enough to protect us from the police.

Who polices the police? Who protects us from the police? But above all, who tolerates this impunity? Who holds the SPVM responsible for its actions? When the only institution which must serve and protect terrorizes part of the population, who protects it?

Remember that there were thousands of us marching in the streets of Montreal last May, following the death of George Floyd, to denounce the police violence that has been raging for too long in our city.

What did we learn during these months spent together, walking the streets of Montreal and denouncing racism and police brutality? It seems our memory has failed us.

Black History Month is an opportunity to celebrate the contributions of Black communities to Canada. However, in this month that is meant to be festive, we don’t have the heart to celebrate. The daily news leaves us with bitterness and a sense of déjà vu.

YEBOAH VERSUS THE POLICE

Early this February, we learned that Kwado Manoa Yeboah -- a Black man and lawyer recognized by the Quebec Bar Association -- was arrested and profiled by the SPVM in front of his daughter. During a routine traffic stop, Mr. Yeboah was held up by the police and asked a multitude of questions that had nothing to do with the reason for the stop: suspicion of using a cell phone while driving.

The arrest took a scary turn for the young lawyer.

He was handcuffed and interrogated for several minutes in front of his helpless daughter who could only film a part of the situation. Convinced he was a victim of racial profiling, Mr. Yeboah intends to sue the SPVM.

CAMARA VERSUS THE POLICE

A few days later, Mamadi lll Fara Camara, another Black man, was arrested and jailed for six days for a crime he did not commit, all while seeing his reputation tarnished, his apartment ransacked by police, and his wife, pregnant with twins, traumatized. In the midst of the legal proceedings, new evidence came to light, including a video recording of the scene, which eventually led to the charges being dropped against the expecting father.

Today, Mr. Camara is a free man. In this case, timid apologies were barely presented to him by Sylvain Caron, director of the SPVM.

However, Mr. Camara was judged too quickly, not only by our justice system, but also with the complicity of the media.

Within a few hours, he became the media's main headline, and Mr. Camara's face was everywhere. We know everything about his private life.

Because he fit too well into the mold of the usual suspect, thereby comforting to people hiding behind their TVs.

Mr. Camara was found guilty before he was even put on trial, and for that, the media is also responsible. He was guilty until proven guilty, despite the fact that he claimed innocence from day one. Remember that Mr. Camara called the SPVM himself to assist the injured police officer.

Who will pay for the damages caused?

Even when we try to help the police, our lives are in danger.