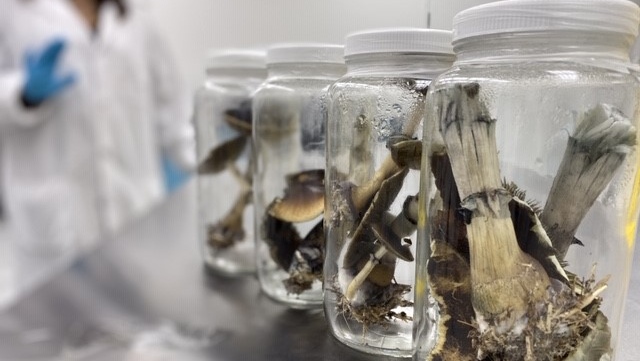 Psychedelic mushrooms with psilocybin shown in a lab. Photo: Numinus

MONTREAL -- Researchers think magic mushrooms will be the future of health care. But how easily and fast regular people will be able to use them is another question -- one a Montreal organization wants to see solved quickly.

“The fact is that a lot of these substances are really safe from a physiological perspective, and even from a psychological perspective,” said Andrew Rose of Mindspace, a mental health-care provider with offices in Westmount, the Plateau and downtown.

“It’s certainly safer than alcohol and a lot of prescription medication that’s out there."

There is increasing evidence that the active ingredient in magic mushrooms, called psilocybin, has major health benefits for people with severe treatment-resistant depression, PTSD, and addictions.

A lot of change is suddenly happening behind the scenes, if not yet at your local pharmacy, and a few organizations such as Mindspace are at the forefront of the push.

A Vancouver-based company called Numinus has become the first in Canada to complete a legal harvest of magic mushrooms in 50 years.

Under Health Canada’s Controlled Drugs and Substances Act, the company was granted a compassionate access clinical trial, which allows it to grow magic mushrooms, extract psilocybin, and refine models of use for psilocybin-assisted psychotherapy.

This doesn’t mean people should go source their own magic mushrooms looking for a cure.

“The drug is a part of it, but where the magic happens is in the therapy,” says Payton Nyquvest, the CEO of Numinus.

“I hear people regularly say that one dose of psilocybin-assisted therapy was like 10 years of psychotherapy wrapped into one treatment.”

Nyquvest agrees, and he says he should know. He has spent 10 years attending psychotherapy due to lifelong chronic pain. He says with that after one round of psilocybin-assisted therapy, he hasn't suffered from the chronic pain since.

He uses the analogy of a toboggan going down a hill. Eventually it will create a groove, or trail, in the snow. Those are neurological pathways in our brain.

“So if I have trauma and my way of dealing with that has been addiction, that pathway can get pretty grooved the more I go back to that addiction," he said.

"Psychedelics essentially grooms the snow and gives you the ability to create new grooves and new pathways.”

American company Maps has released a report of its phase three clinical trials on MDMA, also a psychedelic, used to treat severe post-traumatic stress disorder (PTSD). It shows a 70 per cent effective rate after three treatments.

But first, he says, there needs to be a massive disruption to the current pharmaceutical model before they could become accessible.

“We have to remember that there’s a financial aspect that we’re talking about,” he says. “There are a lot of companies that want people to be on an ongoing, pill-dispensing model because it’s quite profitable.”

Montreal-based Mindspace, which includes a clinic, offers workshops to businesses, therapists and more, is a rarity across the country in how much it has integrated psychedelic treatment into much of its work.

The organization's approach is to bring several disciplines together, such as psychiatry, diet, exercise and mindfulness, to support psychedelic treatment.

Because psychedelics are still illegal in Canada, Mindspace cannot administer the drug during therapy. But their clients often source it themselves and work with one of Mindspace’s 30 therapists on safe use.

Mindspace does not source the drugs or sit with people while they have their experience.

Despite their staff's belief in the drugs' value, making that case to authorities is harder, to hear Rose describe it.

”“There needs to be a way that people who need this treatment can have access to it, and not just people with really great health insurance plans and money," said Rose, who directs Mindspace's programming and its psychedelics programs.

“If there isn’t a shift around how we approach mental health care as part of the larger public health-care system, that’s going to be an issue in how accessible this treatment is."

Rose says two things need to happen. One is for the current health-care system to keep moving forward with research and treatment of psilocybin. Health Canada has made some great strides, he says, including granting Numinus’s clinical trial.

That momentum needs to continue by broadening the regulatory landscape to include psychedelics, allocating more funding into research, and covering mental health under public health, he said.

He believes the next necessary step is decriminalizing illicit drugs.

“If you want to take care of our population and communities, we need to stop putting people in jail for using drugs to self-medicate, and start focusing on the public health questions.”

According to Rose, the stigma around magic mushrooms and other psychedelics is “propaganda” that former U.S. President Richard Nixon used in his 1970 war on drugs.

That’s when clinical research into psychedelics came to a halt. The biggest misconception Nixon spread is that psychedelics are addictive, which is not true, Rose says. Psychedelics have little to no addictive properties.

“The war on drugs was a failure,” he said. “It just needs to be repeated to people that the story they believed in is not the case. And one way is it to see first-hand how these treatments can help.”

Another growing body of research is shifting how we think about well-being and mental health, says Rose.

“It’s changing our understanding of individual, one-on-one therapy and bringing it back to a collective, group therapy.”

Despite the obstacles, he says he fully expects to be offering psychedelic-assisted psychotherapy -- and giving them to his own patients -- in the coming years.